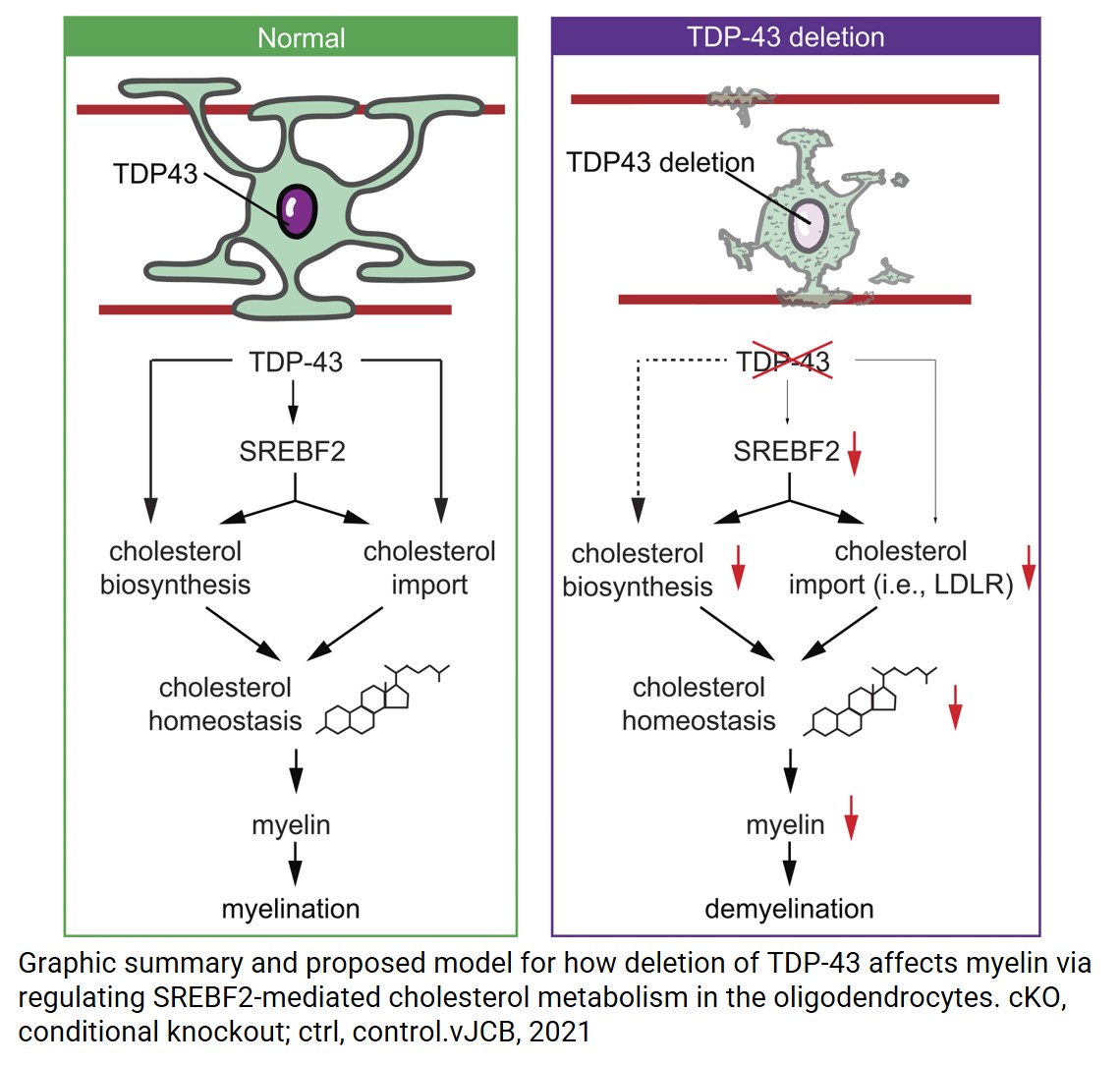 Researchers have discovered that brain cells cannot maintain the cholesterol-rich myelin sheath that protects and insulates neurons in the absence of a protein called TDP-43. The study, which will be published  in the Journal of Cell Biology (JCB), suggests that restoring cholesterol levels could be a new therapeutic approach for diseases associated with TDP-43.

The TDP-43 protein is linked to multiple neurodegenerative diseases, including amyotrophic lateral sclerosis (ALS) and frontotemporal dementia (FTD). TDP-43 plays many vital roles within cells, but, under certain circumstances, it can clump together to form toxic aggregates that damage cells and prevent TDP-43 from performing its normal functions. TDP-43 aggregates are found in the brains of most ALS patients and ~45% of FTD patients and are also linked to several other neurodegenerative disorders, including some cases of Alzheimer’s disease. The aggregates form not only in neurons, but also in other brain cell types such as oligodendrocytes. These latter cells protect neurons and speed up the transmission of nerve impulses by wrapping neurons in a fatty substance called myelin.

In the new study, the authors find that one reason oligodendrocytes are dysfunctional in the absence of TDP-43 is that they are unable to synthesize or take up the cholesterol they need to sustain myelin production.

Cholesterol is such a major component of myelin that 25% of the body’s total cholesterol can be found in the central nervous system. Oligodendrocytes are known to synthesize large amounts of cholesterol for themselves, but they can also acquire it from other brain cells called astrocytes. The authors determined that, in the absence of TDP-43, oligodendrocytes lack many of the enzymes required to synthesize cholesterol, and also have reduced levels of the low density lipoprotein receptor that can take in cholesterol from outside the cell. Supplementing these TDP-43–deficient cells with cholesterol restored their ability to maintain the myelin sheath.

Similar defects in cholesterol metabolism may occur in patients, where the formation of aggregates might prevent TDP-43 from performing its normal functions. Ling and colleagues analyzed brain samples from FTD patients and found that their oligodendrocytes produced lower amounts of two key enzymes required for cholesterol synthesis, while the low density lipoprotein receptor was incorporated into TDP-43 aggregates.

"Our results indicate that simultaneous disruption of cholesterol synthesis and uptake is likely one of the causes of the demyelination phenotype observed in mice with TDP-43–deficient oligodendrocytes, and suggest that defects in cholesterol metabolism may contribute to ALS and FTD, as well as other neurodegenerative diseases characterized by TDP-43 aggregates,” the author says.

Drugs that modulate cholesterol metabolism might therefore be a novel therapeutic strategy to treat these diseases, the researchers suggest.