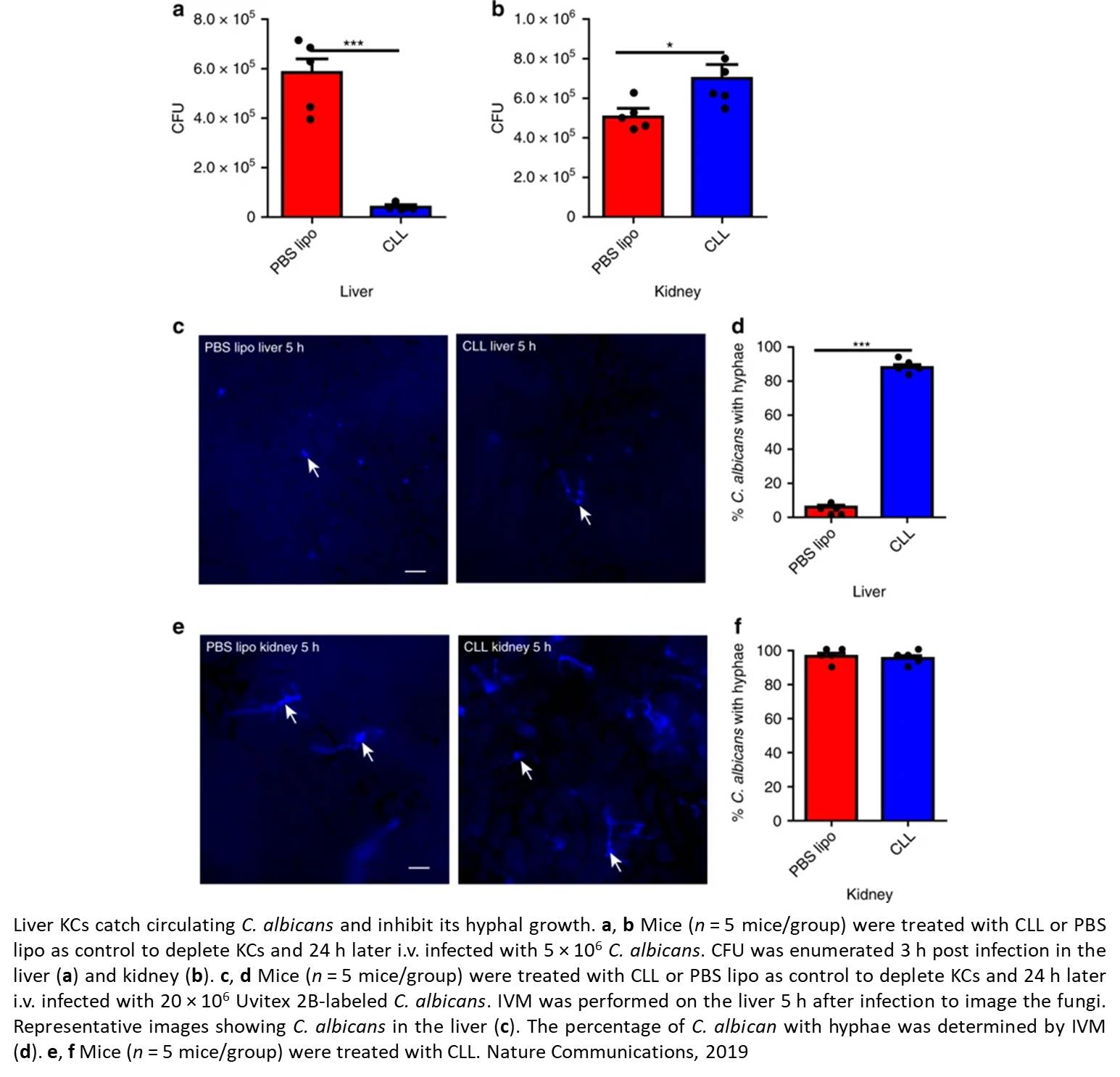 In the latest paper published in Nature Communications, a lab has discovered a new pathway by which liver macrophages called Kupffer cells (KCs) capture potentially fatal fungi in the bloodstream before dissemination to target organs like the brain or kidney. This mechanism not only provides an explanation as to why individuals with liver disease tend to have enhanced risk of contracting fungal infections, but it also points to therapeutic options that could be used in the future to prevent fungal dissemination and invasive fungal infections, which kill 1.5 million people worldwide each year.

"Under intravital microscopy, we can directly see how the KCs catch fungi in real time," says the senior author. "This is a protective mechanism that is working once the fungus becomes invasive, or gets into the bloodstream, to prevent it from spreading. Stopping the dissemination process throughout the body is so important, because once you get dissemination, you get the disease. These findings suggest therapeutic strategies for preventing dissemination, and this could be applied across many types of fungal infections, since they work in similar ways."

Fungal infections affect 1.2 billion people globally each year. In the current paper, the authors specifically examined two types of fungi - Cryptococcus neoformans and Candida albicans. Both of these fungi, if disseminated to their target organs (the brain for Cryptococcus and the kidney for Candida), are fatal infections that are very difficult to treat once contracted. Cryptococcus, for example, is the main cause of meningitis. Each year, more than a million people are infected and contract meningitis, and 60% of those who are infected will die from the disease.\

"Cryptococcus and Candida are fungi that are actually everywhere," says the senior author. "People with healthy immune systems can usually control the fungi after infection, but once it gets into the bloodstream, either one of these fungi can get into the target organs and become fatal. For Cryptococcus, this is especially a problem for those with impaired immune systems, like HIV patients or organ transplant patients. Patients with liver disease are also more prone to Cryptococcus infection, and no one understood why before."

This new discovery that KCs or liver macrophages are responsible for catching free fungi in the bloodstream to prevent further dissemination helps explain this phenomenon, since if the liver is impaired as it is in patients with liver disease, it would stand to reason that this protective mechanism would also be impaired.

"This finding is very interesting and very unusual, because in the field of fungal infections, nobody focuses on the liver," says the senior author. "Researchers tend to look at the target organs like the brain or kidney. The liver is not a target organ, but it tries to clean out the fungus in the bloodstream. As the whole body is connected, this paper gives a more whole system approach to how fungal dissemination interacts in the entire body."

Bacteria in the gut linked to hemorrhagic brain disease Changes to developing brain caused by gene associated with autism

Studies on the mechanism of general anesthesia