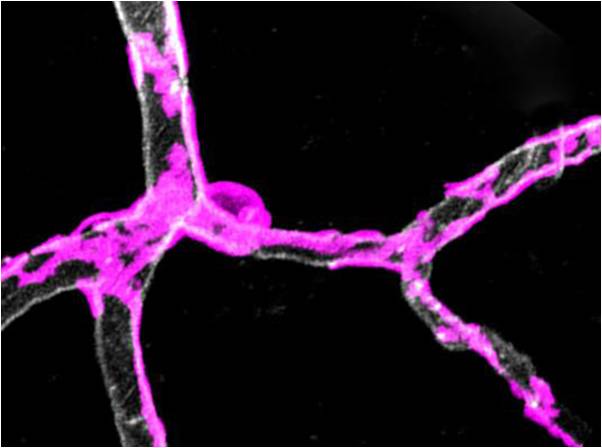 Abnormality with special cells that wrap around blood vessels in the brain leads to neuron deterioration, possibly affecting the development of Alzheimer's disease, a US research study reveals.

"Gatekeeper cells" called pericytes surround blood vessels. They contract and dilate to control blood flow to active parts of the brain. A glitch with gatekeeper cells that surround capillaries may restrict blood and oxygen supply to active areas of the brain, gradually causing neuron loss that might have important implications for Alzheimer's disease (AD).

This study was the first of its kind to use a pericyte-deficient mouse model to test how blood flow is regulated in the brain. The goal was to identify whether pericytes could be an important new therapeutic target for treating neuron deterioration.

"Vascular problems increase the risk of cognitive impairment in many types of dementia, including Alzheimer's disease," said the co- first author of the study. "Pericytes play an important part in keeping your brain healthy.“

Pericyte dysfunction suffocates the brain, leading to metabolic stress, accelerated neuronal damage and neuron loss. To test the theory, researchers stimulated the hind limb of young mice deficient in gatekeeper cells and monitored the global and individual responses of brain capillaries, the smallest blood vessels in the brain. The global cerebral blood flow response to an electric stimulus was reduced by about 30 percent compared to normal mice, denoting a weakened system.

Relative to the control group, the capillaries of pericyte-deficient mice took 6.5 seconds longer to dilate. Slower capillary widening and a slower flow of red blood cells carrying oxygen through capillaries means it takes longer for the brain to get its fuel.

As the mice turned 6 to 8 months old, global cerebral blood flow responses to stimuli progressively worsened. Blood flow responses for the experimental group were 58 percent lower than that of their age-matched peers. In short, with age, the brain's malfunctioning vascular system exponentially worsens.

The study helped us to understand the role of gatekeeper cells, which is to ensure adequate oxygen and energy supply to brain cells.
Previous studies have identified that patients with AD, ALS and other neurodegenerative disorders experienced changes to the blood flow and oxygen being supplied to the brain and that pericytes died.

In the present study, loss of these gatekeeper cells (Pericytes), leads to impaired blood flow and insufficient oxygen delivery to the brain. Further study needs to identify, what kills Pericytes in AD?