Loss- or Gain-of-Function Mutations in a Gene Cause Neurodegeneration! 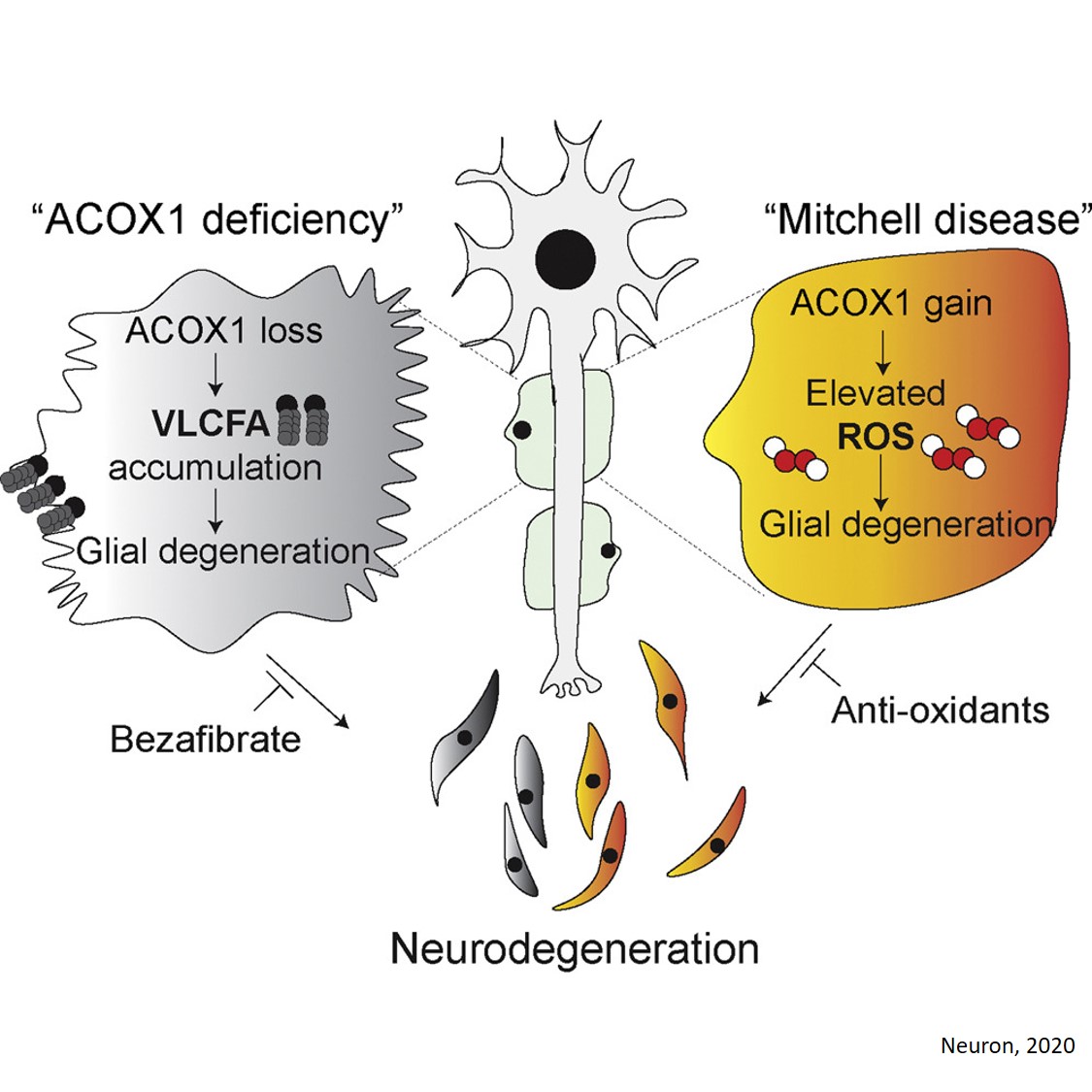 The researchers report that a hyperactive variant of enzyme ACOX1 produces elevated levels of toxic reactive oxygen species (ROS) and causes a previously unidentified late-onset neurodegenerative disorder. The team named this new syndrome "Mitchell disease" in reference to the first patient to be diagnosed with this disorder.

"The brain has large amounts of lipids, which are critical for the proper functioning of the nervous system. Abnormal breakdown of lipids in the brain and peripheral nervous system is associated with several neurodegenerative diseases," said the corresponding author.

In higher vertebrates and insects, very-long-chain-fatty acids (VLCFA) are exclusively broken down in small intracellular organelles called peroxisomes by a series of reactions initiated by an enzyme called Acyl-CoA oxidase 1 (ACOX1). Loss of ACOX1 in humans results in ACOX1 deficiency, which causes an early-onset fatal neuro-inflammatory disease and death at a young age.

This study began when a patient with puzzling neurological symptoms enrolled in the Undiagnosed Diseases Network (UDN). On comparing the patient's and his parents' DNA, the team identified a mutation in the patient that resulted in a single amino acid substitution (N237S) in the ACOX1 protein. This change was seen only in the patient and was not present in either of his parents' DNA, indicating that the patient had a de novo, or new, mutation on this gene. With the help of an online gene-matching tool, GeneMatcher, the team found two more patients who had the same new mutation in the ACOX1 gene.

All three patients, who ranged from 3 to 12 years old at the time of disease onset, had remarkably similar clinical features, including degeneration of peripheral nerves that caused a progressive loss of mobility and hearing. The three individuals had identical variants, a clear indication that ACOX1 dysfunction likely was the cause of the symptoms.

However, this finding initially baffled the researchers - the only known ACOX1-related disorder described in the medical literature at that time presented earlier in infancy with seizures, severe cognitive decline, neuro-inflammation and accumulation of VLCFA in plasma and, more importantly, was caused by the lack of the protein - none of which was true for these three patients.

To resolve this conundrum, the team turned to fruit flies. The first surprising discovery was that the ACOX1 protein is abundant and is critical for the maintenance of glia, cells that support neurons. This uncovered a previously unknown role of peroxisomes in glial cells and paved the way for further experiments.

To understand how ACOX1 variants affect the function of glia, they generated two mutant fly lines, the first one lacked both the copies of ACOX1 gene and the second, carried the substitution mutation (ACOX1 p.N237S) found in the patients in one of the copies.

"Flies lacking ACOX1 mimicked the symptoms of ACOX1 deficiency in humans, including elevated levels of VLCFA along with dramatic loss of glia and neurons and progressively impaired neuronal function. When we reduced VLCFA synthesis in these flies by administering bezafibrate, we observed significant improvements in lifespan, vision, motor coordination and neuronal function, implicating elevated levels of VLCFA and their excessive accumulation in glia as an important contributor," said one of the authors.

In contrast to the loss of ACOX1, a hyperactive ACOX1 resulting from the introduction of a single amino acid substitution results in Mitchell's disease. Typically, breakdown of VLCFA by the enzymatic action of ACOX1 produces small amounts of highly reactive oxygen species, but glial cells quickly neutralize them. However, in Mitchell's disease, hyperactive ACOX1 produces copious amounts of toxic ROS leading to the destruction of glia and their neighboring neurons.

The harmful effects due to hyperactive ACOX1 were potently reversed with the antioxidant, N-acetyl cysteine amide (NACA). However, NACA did not suppress the lethality or toxic effects in flies that lack ACOX1, a clear indication that the two diseases act via entirely different pathways and have to be treated with two distinct therapeutic strategies.