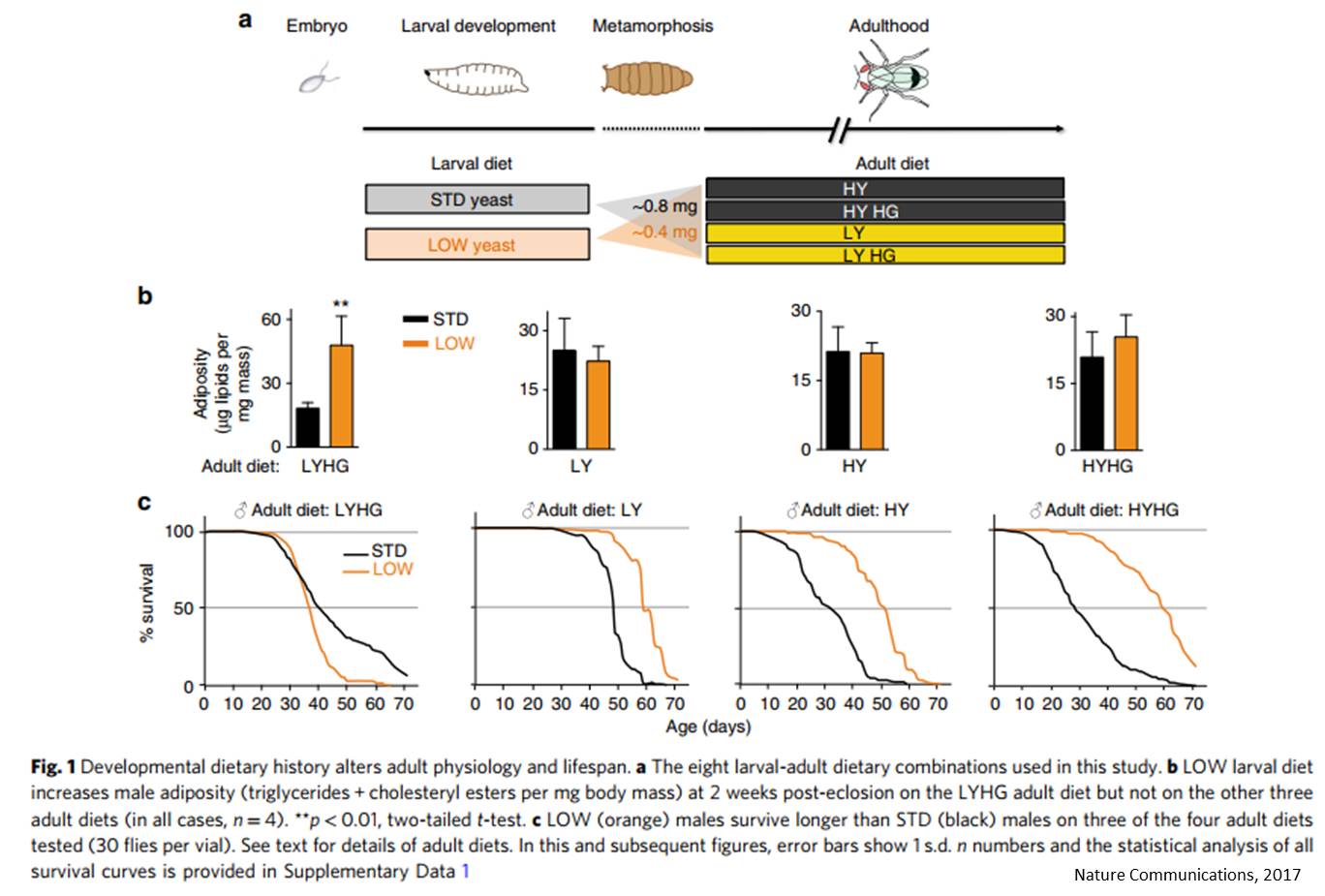 Fruit flies raised on a low protein diet early in life can live over twice as long as their peers, according to new research.

To understand how diet in early life acts to alter lifespan, scientists used the fruit fly, Drosophila melanogaster. This insect shares more than two thirds of disease genes with humans and is used in lifespan experiments because it lives for only two to three months, rather than many years.

The researchers found that flies raised on a low protein diet during the early part of their life, but then swapped onto a standard diet as adults, lived more than twice as long as flies fed throughout on a standard diet.

"There is evidence in humans and other mammals that a mother's diet can alter the risk of her offspring developing cardiovascular disease and diabetes much later in life, but the genetic processes underlying this effect remain to be identified," says senior author of the paper. "Obviously fruit flies are not humans, and it's important to be clear that our results in flies are certainly not a recommendation that expecting mothers should eat a low-protein diet."

The team found that adult fruit flies release toxic lipids from their 'skin' that shorten lifespan. These lipids were less toxic if the fly ate a low-protein diet during its early life, before it became an adult.

"Skin lipids have beneficial functions in flies such as preventing dehydration and stimulating courtship behaviours, but our results now show that they also have a dark side," says first author of the paper.

The scientists were surprised to find that toxic lipids produced by flies not only affect their own lifespan, but also that of other nearby flies.

The team wondered if the toxic skin lipids could also help explain why fruit flies have a shortened lifespan when they are densely populated - a phenomenon that scientists have been studying for nearly a century.

They found that doubling the number of flies in a container significantly shortened their lifespan. If, however, these flies had been genetically modified to prevent them from producing toxic skin lipids then doubling their number had no effect on lifespan. This and other experiments showed that the negative effect of population density on lifespan is caused by skin toxins.

"Like fruit flies, humans also produce skin lipids that moisturise and protect the skin against everyday wear and tear from the environment. But they too can be harmful because they react with sunlight and other stressors in the environment to produce harmful chemicals that can accelerate the signs of ageing," says the senior author. "We know that many of the genes involved in making skin lipids are conserved from flies to humans. We now want to use fruit fly genetics to help pinpoint the ones that regulate how toxic they are."