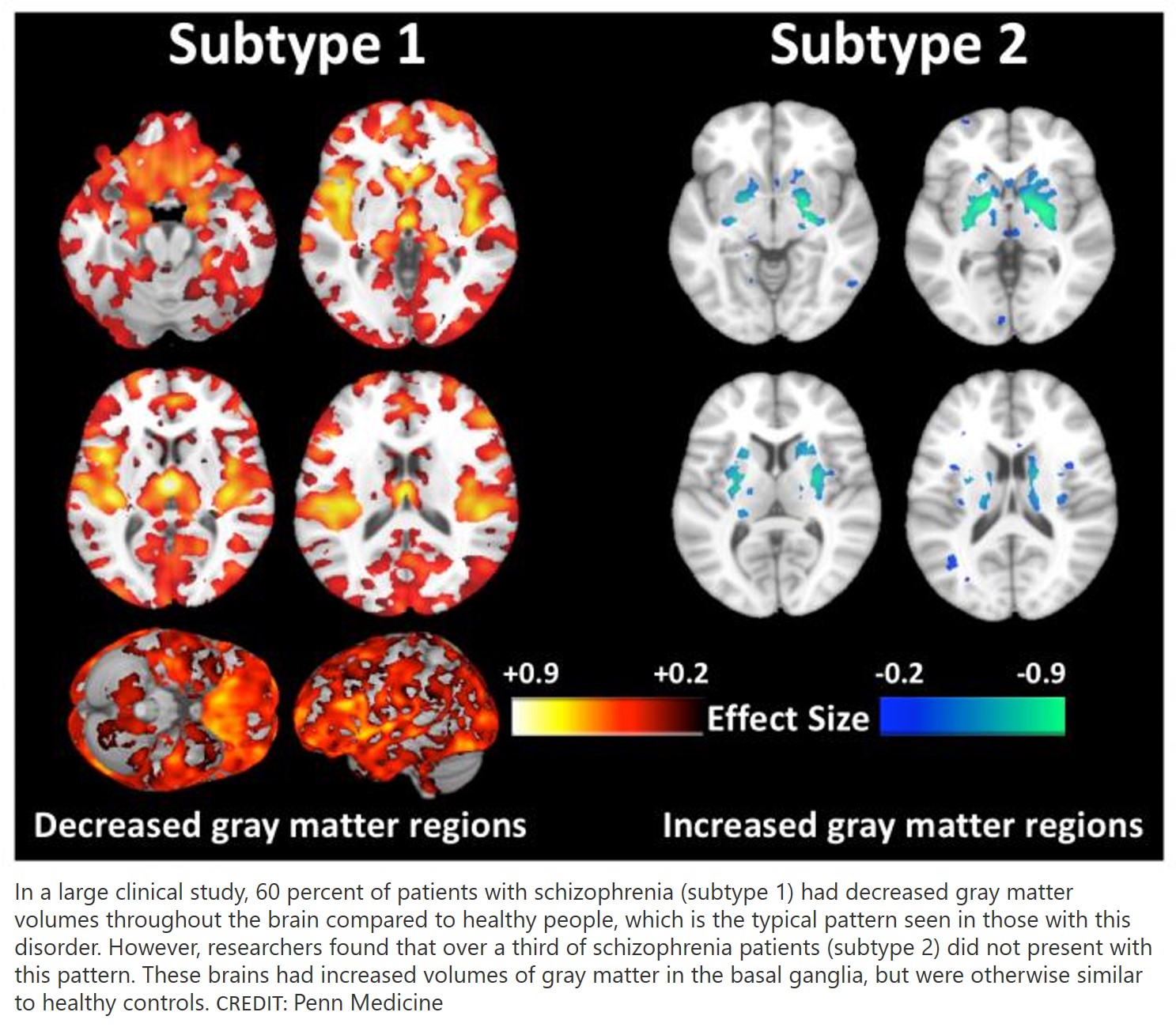 The researchers are the first to discover two distinct neuroanatomical subtypes of schizophrenia after analyzing the brain scans of over 300 patients. The first type showed lower widespread volumes of gray matter when compare to healthy controls, while the second type had volumes largely similar to normal brains. The findings, published in the journal Brain, suggest that, in the future, accounting for these differences could inform more personalized treatment options.

"Numerous other studies have shown that people with schizophrenia have significantly smaller volumes of brain tissue than healthy controls. However, for at least a third of patients we looked at, this was not the case at all -- their brains were almost completely normal," said the principal investigator. "In the future, we're not going to be saying, 'This patient has schizophrenia,' We're going to be saying, 'This patient has this subtype' or 'this abnormal pattern,' rather than having a wide umbrella under which everyone is categorized."

Schizophrenia is a poorly understood mental disorder that typically presents with hallucinations, delusions, and other cognitive issues -- though symptoms and responses to treatment vary widely from patient to patient. Up until now, attempts to study the disease, by comparing healthy to diseased brains, has neglected to account for this heterogeneity, which the author says has muddled research findings and undermined clinical care.

The international cohort of study participants included 307 schizophrenia patients and 364 healthy controls, all of whom were 45-years-old or younger. The authors then analyzed the brain scans using a machine learning method developed at Penn called HYDRA (Heterogeneity Through Discriminative Analysis). The approach helps to identify "true disease subtypes" by limiting the influence of confounding variables, such as age, sex, imaging protocols, and other factors, according to the study authors.

"This method enabled us to sub-categorize patients and find how they differed from the controls, while allowing us, at the same time, to dissect this heterogeneity and tease out multiple pathologies, rather than trying to find a dominant pattern," the author said.

After applying this machine learning method to the brain images, the researchers found that 115 patients with schizophrenia, or nearly 40 percent, did not have the typical pattern of reduced gray matter volume that has been historically linked to the disorder. In fact, their brains showed increases of brain volume in the middle of the brain, in an area called the striatum, which plays a role in voluntary movement. When controlling for differences in medication, age, and other demographics, the researchers could not find any clear explanation for the variation.

"The subtype 2 patients are very interesting, because they have similar demographic and clinical measures with subtype 1, and the only differences were their brain structures," said a lead author.

There are a variety of antipsychotic medications available to manage the symptoms of schizophrenia, but how they will affect a particular patient -- both positively or negatively -- is often a shot in the dark, according to study co-senior author.

"The treatments for schizophrenia work really well in a minority of people, pretty well in most people, and hardly at all in a minority of people. We mostly can't predict that outcome, so it becomes a matter of trial and error," Wolf said. "Now that we are starting to understand the biology behind this disorder, then we will hopefully one day have more informed, personalized approaches to treatment."

As to why an entire subset of patients with schizophrenia have brains that resemble healthy people, the senior author is not willing to speculate.

"This is where we are puzzled right now," the author said. "We don't know. What we do know is that studies that are putting all schizophrenia patients in one group, when seeking associations with response to treatment or clinical measures, might not be using the best approach."

Future research, he said, will provide a more detailed picture of these subtypes in relation to other aspects of brain structure and function, clinical symptoms, disease progression, and etiology.