Macrophages migrate from the blood to brain shortly after stroke 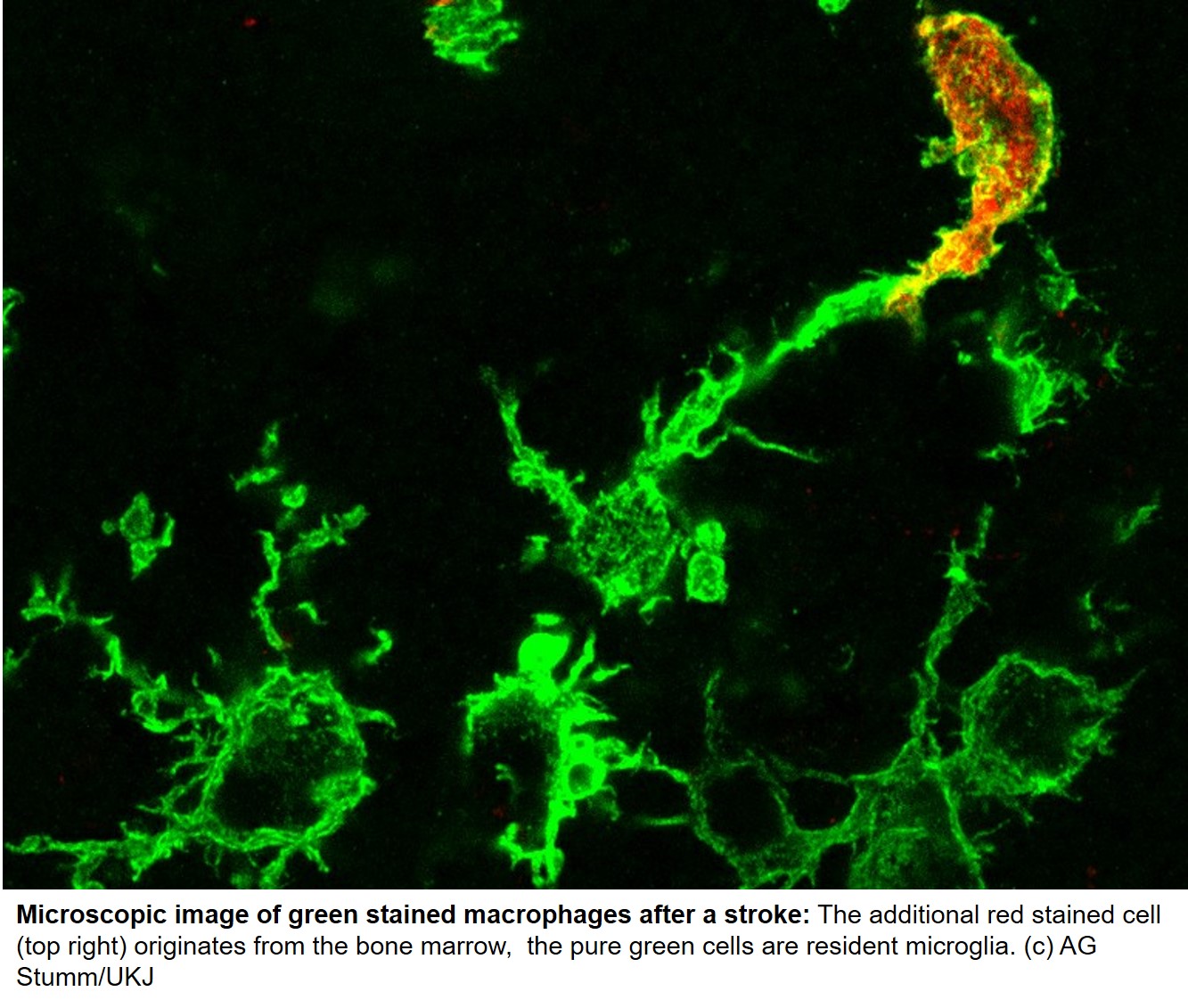 Macrophages are part of the innate immune system and essential for brain development and function. Using a novel method, succeeded in visualizing macrophages that were formed in the bone marrow. In studies on mice, this technology enabled the researchers to observe that shortly after a stroke, numerous macrophages that had migrated from the blood begin to attack dead and adjacent healthy brain tissue. The results have now been published in the journal Nature Neuroscience.

In ancient Greek, the term macrophage means something like "big eater". These cells are components of our innate immune system that are present in every tissue of our body. In the brain, these resident immune cells are called microglia and play an essential role in normal brain development and function. During inflammatory processes, for example after stroke, brain infections, multiple sclerosis or Alzheimer's disease, other macrophages come into play, which are recruited from the bone marrow. Does it make a difference with regard to brain diseases whether the macrophages are resident in the brain or have migrated into the brain? This question has so far remained unresolved because scientists have not been able to differentiate between the two cell types using conventional methods.

The team studied mice in which the genetic information for a molecular switch was introduced into a gene called Cxcr4. If this switch is activated with a special agent, stem cells in the bone marrow, from which all blood-circulating immune cells originate, produce a colored fluorescent protein.

"The trick with our model is that this feature is transferred to the daughter cells circulating in the blood, whereas resident microglia in the brain are not marked," explains the pharmacologist. Immigrated immune cells can therefore be easily distinguished from microglia by their color. The researchers were able to show that during a healthy mouse life, virtually no macrophages generated by bone marrow stem cells settle in the brain. This complements earlier findings that macrophages located in tissues develop very early during embryonic development, colonize the entire embryo and from then on maintain themselves through cell division.

With the help of their model study on mice, the researchers have now discovered that shortly after a stroke, numerous macrophages that had migrated from the blood begin to attack dead and adjacent healthy brain tissue. Contrary to previous assumptions, the outsiders withdrew completely from the healthy brain tissue in the following days and were then only found in the dead brain tissue.

In a next step, the researchers inactivated the Cxcr4 gene function, leaving intact the molecular switch that helps them detect the immigrated immune cells. "We were interested in Cxcr4 because this protein acts like an antenna, i.e. as a receptor, for a messenger substance that is believed to be involved in inflammatory processes in the brain," says the senior author. The researchers found that a initially attracted fewer macrophages into the brain when the Cxcr4 function was missing. In the following days, the macrophages that had migrated into the brain migrated only incompletely into the dead brain tissue. Some remained in healthy brain tissue for far too long and prevented the resident microglia from settling down.

"Moreover, numerous genes that are necessary for a protective immune response were not switched on in the immigrated macrophages, whereas inflammation-promoting genes were overexpressed in the resident macrophages," says another author. Furthermore, the absence of the Cxcr4 receptor in mice with stroke resulted in increased tissue damage and a worse overall condition of the mice.

Overall, the researchers see two milestones achieved: Their genetic switch is a universal tool that enables scientists to better investigate the function of immune cells originating from the bone marrow. Furthermore, they show that the Cxcr4 receptor is part of an immune response with which macrophages originating from the bone marrow protect the damaged brain. "The better we understand the spatial and temporal activation of the Cxcr4 molecule during a stroke, the better we will be able to treat patients with Cxcr4-inhibiting drugs in the future," says the senior author.