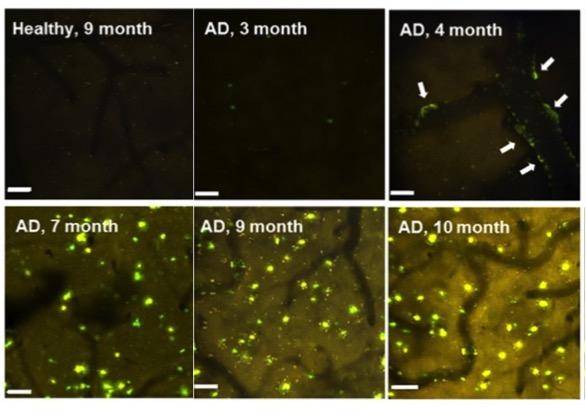 Alzheimer's disease (AD) affects more than 35 million people, a number that is expected to increase in the coming years. Currently, Alzheimer's diagnoses rely on clinical neuropathologic assessment of amyloid-β (Aβ) peptide aggregates (plaques) and neurofibrillary tangles. But in this recent study, researchers reveal that an enzyme already implicated in a host of neural disorders could someday serve as a biomarker.

In the brains of patients with AD, amyloid peptides aggregate to form oligomers and plaques that are thought to be responsible for the disease symptoms. It is difficult to monitor Aβ aggregation in living animals and patients, and current methods to track it in patient brains are costly, have low resolution or require radiation.

Monoamine oxidase (MAO) is involved in many neurological disorders, such as depression. In addition, MAO is known to be associated with Alzheimer's, but studies establishing this relationship were only conducted in lab dishes and test tubes. To better understand MAO's association with AD, and to determine whether MAO levels could be used as a biomarker for the disease, scientists studied the protein in a mouse model of Alzheimer's.

The team devised an imaging tool to watch both Aβ and MAO at the same time in mice, and observed that as Aβ plaques increase (that is, as AD progresses), MAO activity also increases. The team also showed that there are three distinct phases of MAO activity that change along with AD progression: a slow initiation stage, a subsequent aggressive stage and finally a saturation stage. The authors say these results suggest that MAO could be helpful as a biomarker to someday diagnose and monitor the disease in patients, possibly using body fluids.