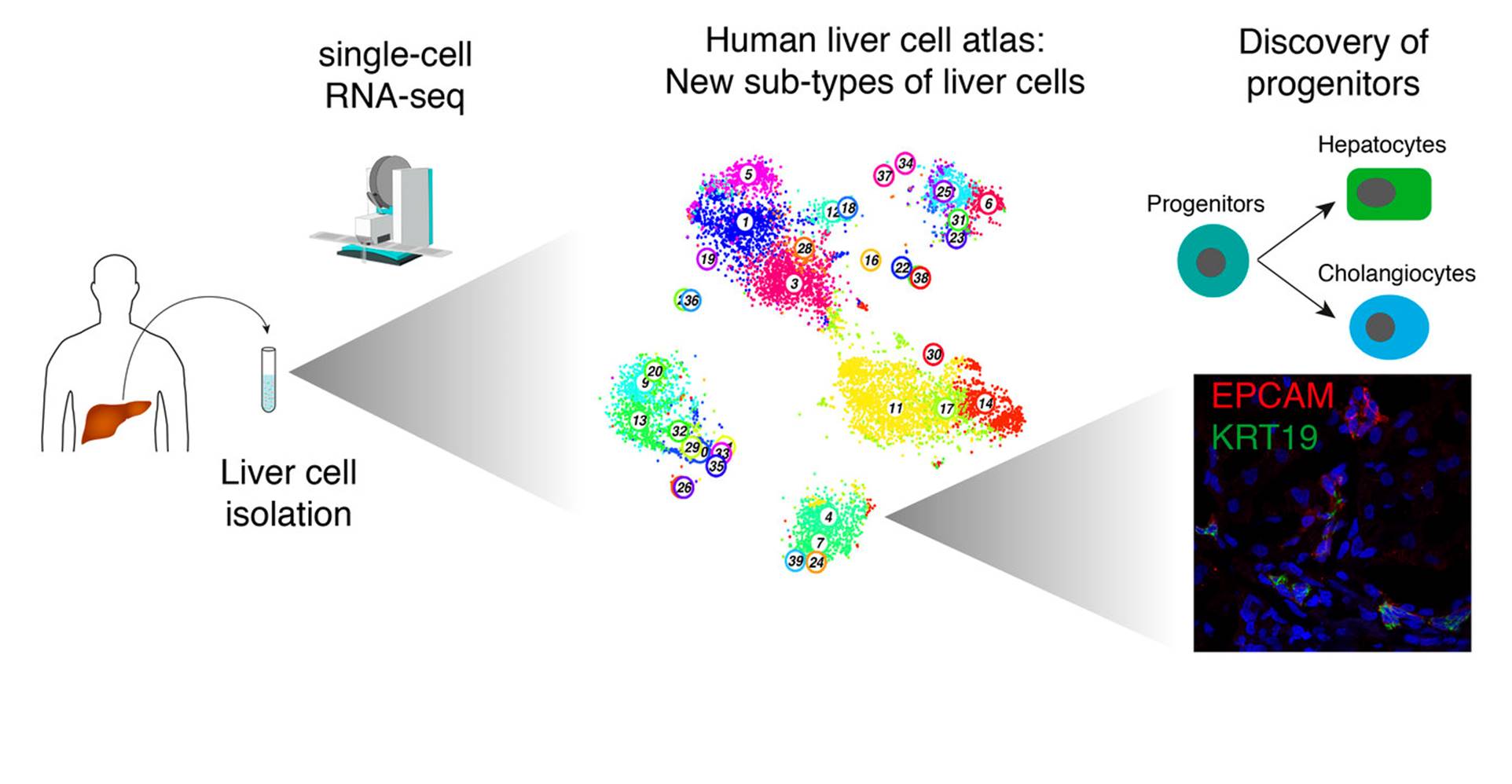 The liver is one of the largest and most versatile organs of the human body. It turns sugars, proteins, and fats from our food into substances useful for the body and releases them to the cells. In addition to its role in human metabolism, the liver is an immunological organ, which is indispensable for detoxifying the blood. Most strikingly, the liver is the only internal organ that can regenerate back to its full size with only 25% of its original mass.

Liver diseases are one of the biggest health problems in the world and a leading cause of death. Despite the immense importance of the liver for human health, the diversity of individual liver cell types and the associated molecular and cellular processes in both healthy and diseased tissue have not yet been fully investigated.

Scientists are now presenting a comprehensive cell atlas of the human liver published in the science journal Nature. Using what is known as single-cell RNA sequencing, the researchers succeeded in creating a detailed map of the cell populations in the healthy human liver. Based on the analysis of 10000 cells from nine human donors, the cell atlas maps all important liver cell types, including hepatocytes, the major metabolic cells of the liver, endothelial cells lining the blood vessels, liver resident macrophages and other immune cell types, as well as bile duct cells and liver epithelial progenitors. With this data, it is possible to capture the diversity of cell types and cell states at an unprecedented resolution and to understand how they change during development or upon disease progression.

The researchers also discovered an astonishing diversity among individual cells of the alleged same cell type. They found new subtypes of hepatocytes, endothelial cells, and macrophages, which, although hardly different in their morphological appearance, have discrete gene expression profiles. These discoveries were made possible by the significant progress of experimental and computational single-cell analysis methods, which enable cells to be examined at high resolution.

In single-cell RNA sequencing, the organ tissue to be investigated is dissociated into individual cells; these cells are then isolated and sequenced separately. The sequencing is used to determine how many messenger RNA molecules (mRNA) of each gene are present in the cell. "The messenger RNA transmits the blueprints stored in the DNA to the protein factories. By measuring which RNA molecules are present in a cell at a certain point in time, we can identify which genes are active. This gives us a kind of fingerprint that provides us with a comprehensive insight into the very nature of each cell. This enables us to understand which functions the cell performs, how it is regulated and also what happens when diseases develop," explains the author.

The data obtained in this way are not only extremely extensive, but also very complex since the RNA molecules of thousands of genes in thousands of cells have to be quantified and interpreted simultaneously. In recent years, researchers have developed tailor-made algorithms to characterize the different cell types and understand their developmental pathways.

Using such fingerprints of cells, the researchers also identified previously unknown properties of a subpopulation of bile duct cells. Bile ducts run through the entire liver to transport bile to the gallbladder. "Our data show that cells within this rare subpopulation are precursor cells or progenitors. They are not only able to form organoids, which is a marked characteristic of stem cells, but also have the potential to develop into different cell types," explains the first author of the study. These progenitor cells either differentiate into hepatocytes or bile duct cells when cultivated in a culture medium. The researchers are convinced that this precursor cell population plays an important role in liver regeneration and could also be involved in the development of liver diseases or tumors.

The cell atlas and the method of single-cell RNA-sequencing, therefore, have great potential for cancer therapy. Current approaches to analyze diseased tissue, such as tumor tissue, only provided an average value of the concentration of active genes for the entire tissue sample and thus only an average view of the tumor's molecular profile. "The contribution of rare cell types or even individual cells is lost in this average value. Although it is perhaps precisely these few cells that determine whether a tissue is healthy or degenerates into cancer," explains the author.

But single-cell sequencing, on the other hand, captures the molecular signature of each healthy or diseased cell in the sample to be examined. The comparison with reference data from healthy tissue enables scientists to target the disease-causing molecular properties of tumor cells and may help to develop improved treatment options in the future.

The researchers demonstrate in their newest study that the cell atlas of the human liver will be an essential reference database for liver cancer research. They compared the data of healthy tissue from the cell atlas with cells from hepatocellular carcinoma, the most common form of primary liver cancer. The comparison enabled conclusions to be drawn, e.g. the identification of new tumor cell markers and perturbed gene activity patterns of different cell types within the tumor. "I think that research into cancer using single-cell sequencing will help to improve the diagnosis and eventually the treatment of tumors even further. In the future, we will not only be able to uncover possible interactions between different cell types in tumors. It will also be possible to observe these interactions as the disease progresses," says the author.

The researchers are convinced that their cell atlas of the human liver and the developed methods have laid an important foundation within biomedicine, which will advance the research and understanding of liver diseases on the molecular level to possibly create new therapeutic strategies against liver diseases in the future.