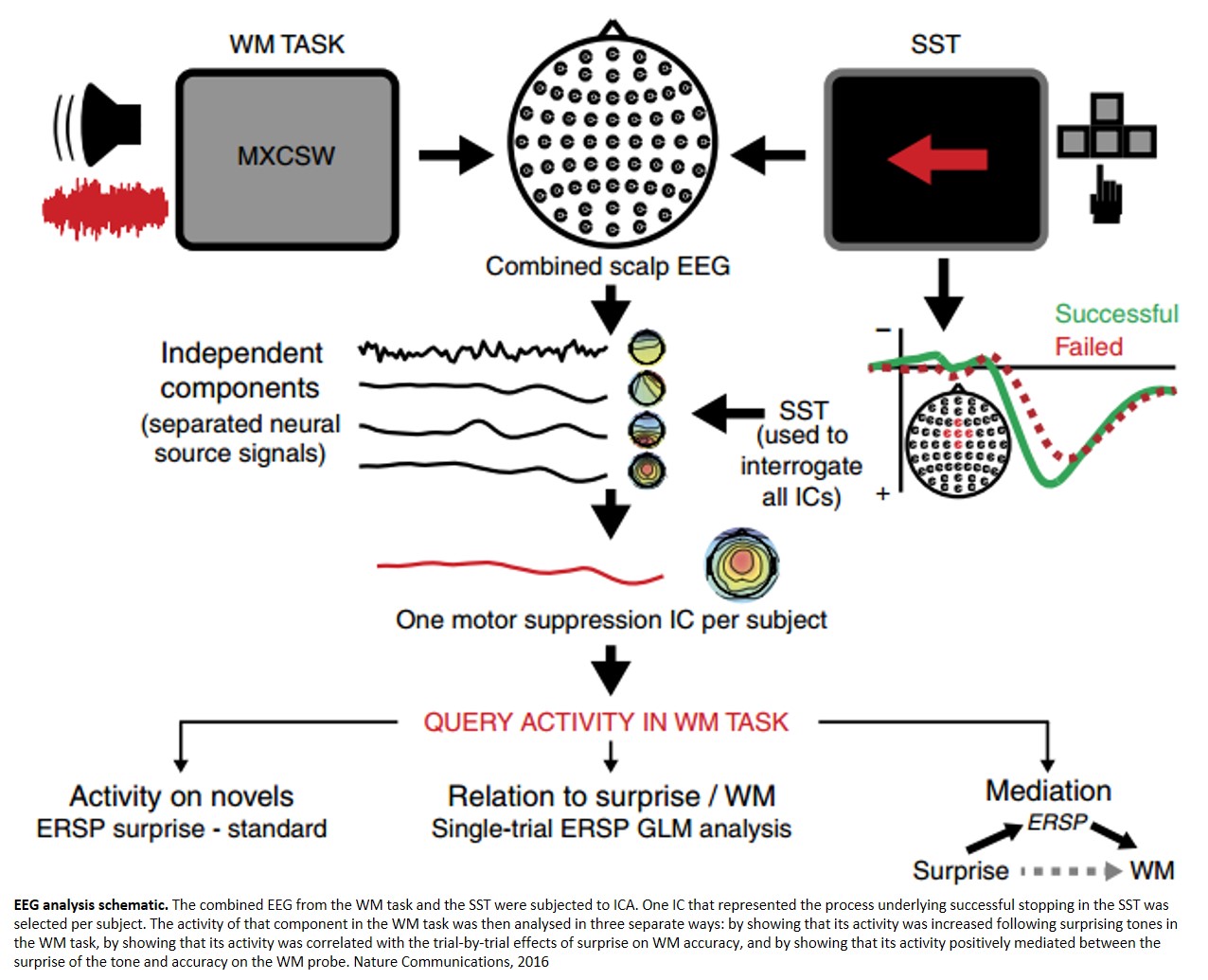 Have you had the experience of being just on the verge of saying something when the phone rang? Did you then forget what it is you were going to say? A study of the brain's electrical activity offers a new explanation of how that happens.

The researchers in the journal Nature Communications suggest that the same brain system that is involved in interrupting, or stopping, movement in our bodies also interrupts cognition -- which, in the example of the phone ringing, derails your train of thought.

The findings may give insights into Parkinson's disease, which, can cause muscle tremors as well as slowed-down movement and facial expression. Parkinson's patients may also present as the "opposite of distractible," often with a thought stream so stable that it can seem hard to interrupt. The same brain system that is implicated in "over-stopping" motor activity in these patients, Aron said, might be also be keeping them over-focused.

The current study focuses particularly on one part of the brain's stopping system -- the subthalamic nucleus (STN). This is a small lens-shaped cluster of densely packed neurons in the midbrain and is part of the basal ganglia system.

All the volunteers were given a working memory task. On each trial, they were asked to hold in mind a string of letters, and then tested for recall. Most of the time, while they were maintaining the letters in mind, and before the recall test, they were played a simple, single-frequency tone. On a minority of trials, this sound was replaced by a birdsong segment - which is not startling like a "bang!" but is unexpected and surprising, like a cell phone chirping suddenly. The volunteers' brain activity was recorded, as well as their accuracy in recalling the letters they'd been shown.

The results show, the researchers write, that unexpected events manifest the same brain signature as outright stopping of the body. They also recruit the STN. And the more the STN was engaged - or the more that part of the brain responded to the unexpected sound - the more it affected the subjects' working memory and the more they lost hold of what they were trying to keep in mind.

"For now," said the author, "we've shown that unexpected, or surprising, events recruit the same brain system we use to actively stop our actions, which, in turn, appears to influence the degree to which such surprising events affect our ongoing trains of thought."

A role for the STN in stopping the body and interrupting working memory does fit anatomical models of how the nucleus is situated within circuitry in the brain. Yet more research is needed, the researchers write, to determine if there's a causal link between the activity observed in the STN and the loss in working memory.

"An unexpected event appears to clear out what you were thinking," author said. "The radically new idea is that just as the brain's stopping mechanism is involved in stopping what we're doing with our bodies it might also be responsible for interrupting and flushing out our thoughts."

If further research bears out the connection suggested by the current study, between the STN and losing your train of thought following an unexpected event, the researchers say it might be that it is an adaptive feature of the brain, something we evolved long ago as a way to clear our cognition and re-focus on something new.

The author suggests this example: You're walking along one morning on the African Savannah, going to gather firewood. You're daydreaming about the meal you're going to prepare when you hear a rustle in the grass. You make a sudden stop - and all thoughts of dinner are gone as you shift your focus to figure out what might be in the grass. In this case, it's a good thing to forget what you had been thinking about. Mice can see infrared with nanoparticles!