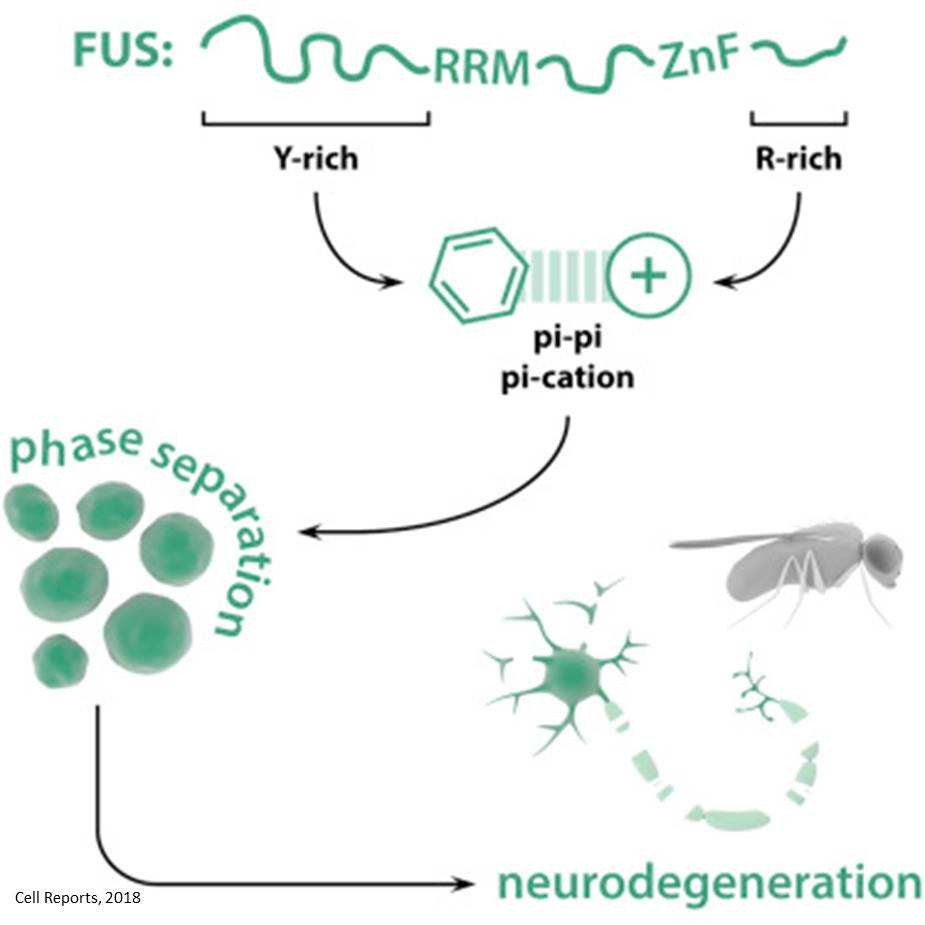 The mutated and aggregated protein FUS is implicated in two neurodegenerative diseases: amyotrophic lateral sclerosis (ALS) and frontotemporal lobar degeneration (FTLD). Using a newly developed fruit fly model, researchers have zoomed in on the protein structure of FUS to gain more insight into how it causes neuronal toxicity and disease.

ALS and FTLD are two different adult-onset neurodegenerative disorders in terms of the symptoms they cause and the neurons they affect. In ALS, the neurons that control muscle movement degenerate, resulting in progressive paralysis, while FTLD affects specific brain areas and causes dementia. Still, many patients present with symptoms of both diseases, so scientists and clinicians now believe they are actually on opposite ends of the same disease spectrum.

The overlap between ALS and FTLD is not only apparent in the clinic, but also when looking at the underlying disease mechanisms. FUS, for example, is implicated in both diseases. Mutations in the FUS gene cause familial ALS and aggregation of the FUS protein is observed in both ALS and FTLD.

FUS normally resides in the nucleus of the cell, but relocates to stress granules in the cytoplasm upon cellular stress. Stress granules are basically liquid droplets in the cell, similar in content to the toxic protein aggregates found in ALS and FTLD, but different in that their assembly is dynamic and reversible.

Could these liquid droplets serve as stepping stones towards the formation of aggregates that are typical for disease? "We believe so," says one of the authors. "Both FUS droplets and hydrogels have been shown to undergo a switch to irreversible fibrillarization in a test tube, but this process has not been studied in a cellular context".

The team generated a fruit fly model of FUS toxicity to investigate the formation of liquid droplets in more detail. They identified a previously unrecognized synergistic effect between two different protein regions that mediate toxicity. "We found that the FUS protein that is misbehaving in ALS and FTLD can form liquid droplets via specific molecular interactions between hydrophobic and charged amino acids," explains another researcher involved in the study. One N-terminal FUS protein domain was generally considered to mediate aggregation, but the new findings indicate that arginine residues in the c-terminal region of the protein are also required for maturation of FUS in cellular stress granules.

Further experiments immediately hinted at the importance of this protein interaction. Another author said: "We showed that the interactions between exactly these two protein domains could explain toxicity in our fruit fly ALS model, suggesting how the protein may be misregulated in patients as well."

"Deciphering how and why proteins such as FUS start aggregating in the brain will be key to understand neurodegenerative diseases and could lead to novel therapeutic strategies. Our new findings highlight an important role for arginine-rich domains in the pathology of these proteins" said the senior author.