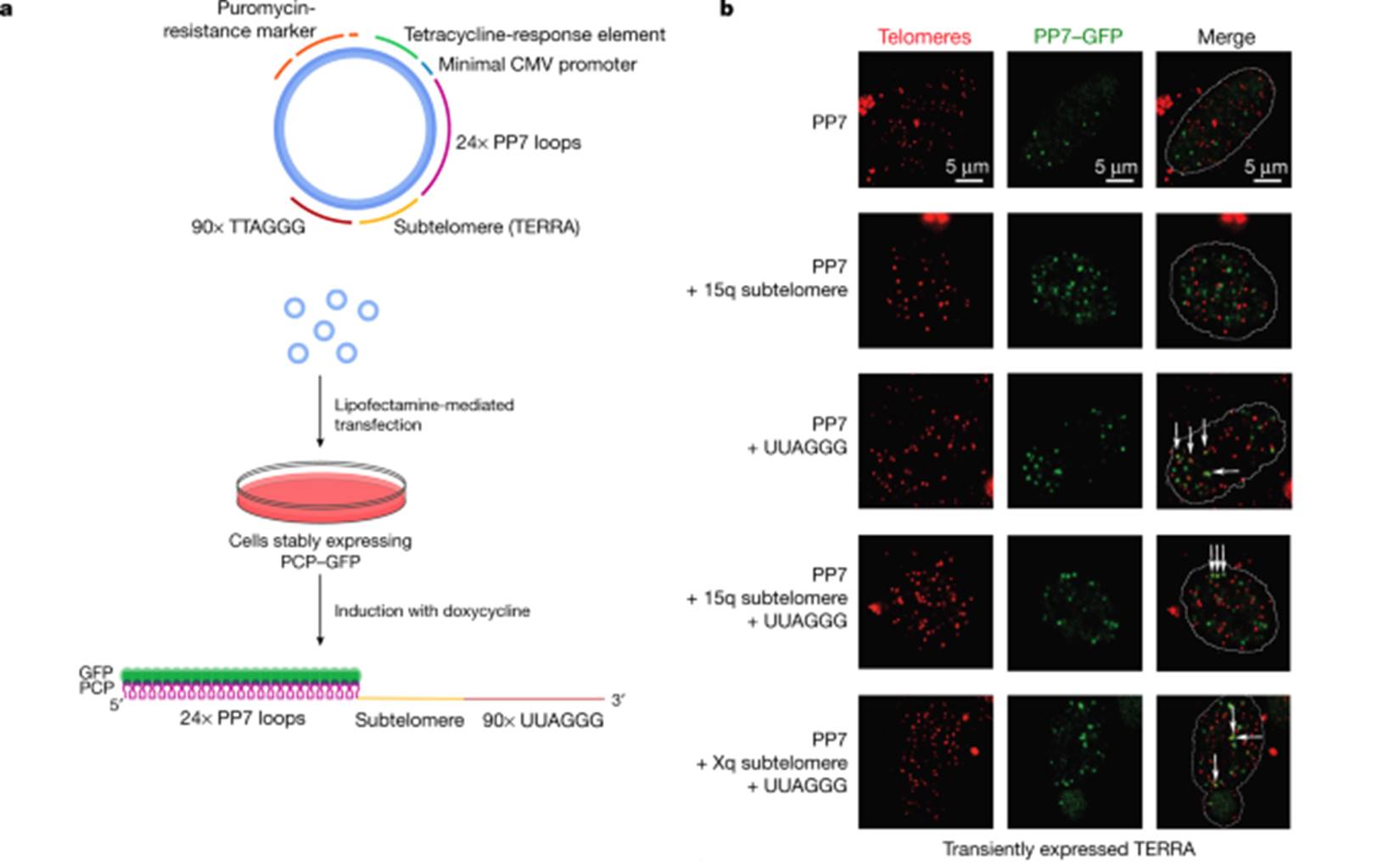 Much like an aglet of a shoelace prevents the end of the lace from fraying, stretches of DNA called telomeres form protective caps at the ends of chromosomes. But as cells divide, telomeres become shorter, making the protective cap less effective. Once telomeres get too short, the cell stops dividing. Telomere shortening and malfunction have been linked to cell aging and age-related diseases, including cancer.

Scientists have known that RNA species called TERRA help to regulate the length and function of telomeres. Discovered in 2007 TERRA belongs to a class of molecules called noncoding RNAs, which are not translated into proteins but function as structural components of chromosomes. TERRA accumulates at chromosome ends, signaling that telomeres should be elongated or repaired.

However, it was unclear how TERRA got to the tip of chromosomes and remained there. "The telomere makes up only a tiny bit of the total chromosomal DNA, so the question is 'how does this RNA find its home?'", the author says. To address this question, the team set out to analyze the mechanism through which TERRA accumulates at telomeres, as well as the proteins involved in this process. The findings are published in Nature.

By visualizing TERRA molecules under a microscope, the researchers found that a short stretch of the RNA is crucial to bring it to telomeres. Further experiments showed that once TERRA reaches the tip of chromosomes, several proteins regulate its association with telomeres. Among these proteins, one called RAD51 plays a particularly important role, the author says.

RAD51 is a well-known enzyme that is involved in the repair of broken DNA molecules. The protein also seems to help TERRA stick to telomeric DNA to form a so-called "RNA-DNA hybrid molecule". Scientists thought this type of reaction, which leads to the formation of a three-stranded nucleic acid structure, mainly happened during DNA repair. The new study shows that it can also happen at chromosome ends when TERRA binds to telomeres. "This is paradigm-shifting," the author says.

The researchers also found that short telomeres recruit TERRA much more efficiently than long telomeres. Although the mechanism behind this phenomenon is unclear, the researchers hypothesize that when telomeres get too short, either due to DNA damage or because the cell has divided too many times, they recruit TERRA molecules. This recruitment is mediated by RAD51, which also promotes the elongation and repair of telomeres. "TERRA and RAD51 help to prevent accidental loss or shortening of telomeres," the author says. "That's an important function."

Given the role of telomeres in health and disease, it will be important to see how the newly discovered mechanism--which was deduced from observations in living cells and reproduced in test tubes--is regulated in the very complex cellular environment, the author says. "