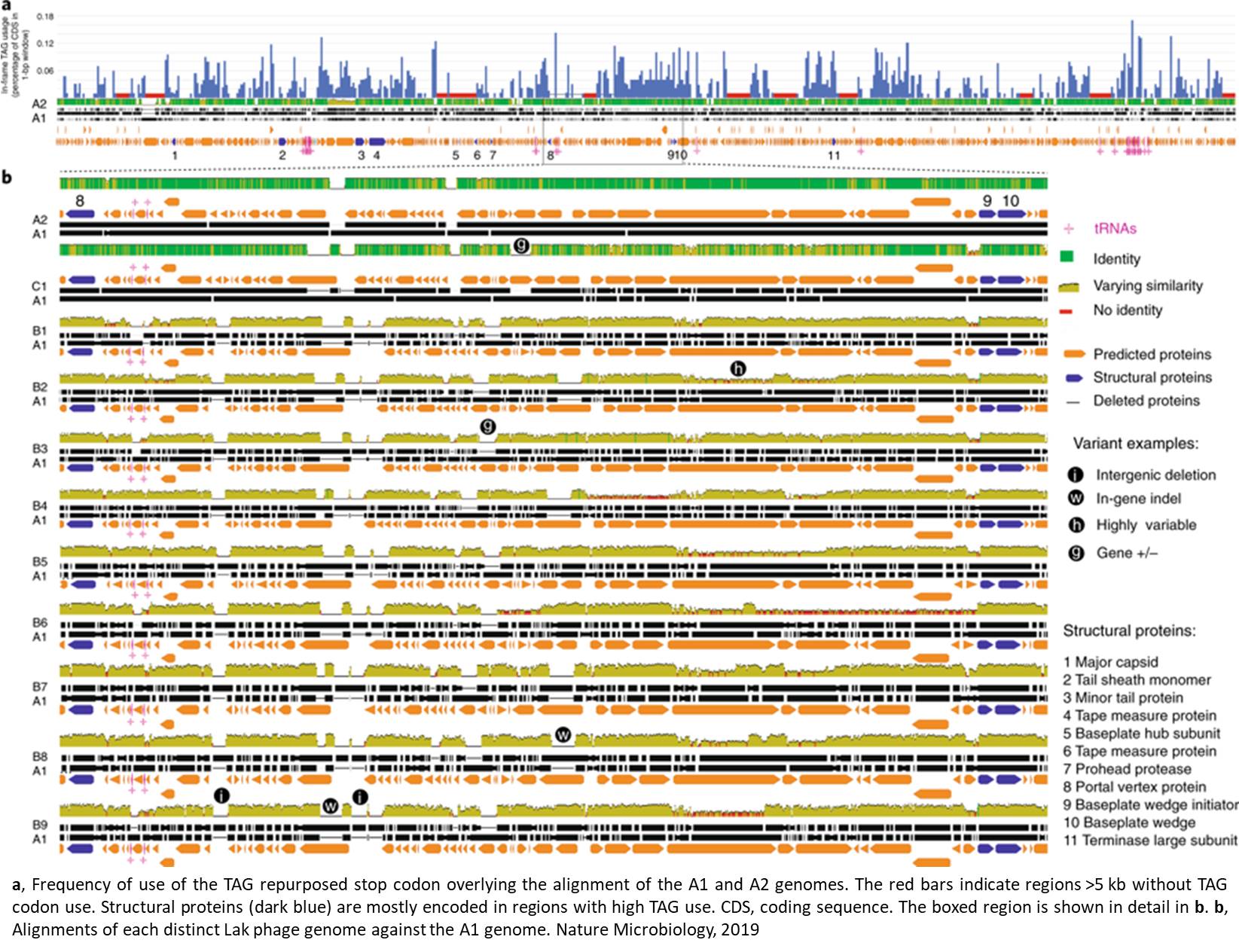 Viruses plague bacteria just as viruses like influenza plague humans. Some of the largest of these so-called bacteriophages have now been found in the human gut, where they periodically devastate bacteria just as seasonal outbreaks of flu lay humans low, according to a new study.

These "megaphages" -- which have genomes about 10 times larger than the average phage and twice as big as any phage previously found in humans -- were found in the human intestinal tract, but only from humans who eat a non-Western, high-fiber, low-fat diet.

Tellingly, they were also found in the guts of baboons and a pig, demonstrating that phages -- which can carry genes that affect human health -- can move between humans and animals and perhaps carry disease.

"Phage are well-known to carry genes that cause disease and genes that code for antibiotic resistance," said the senior author. "The movement of megaphages along with the movement of their host bacteria raises the possibility that disease also can move between animals and humans, and that the capacity for this is much larger with megaphage."

And because megaphages, which most biologists do not consider to be "living," are bigger than lifeforms like bacteria, they blur the distinction between what is alive and what isn't.

While sequencing gut bacteria from people in Bangladesh to explore the effects of arsenic-tainted water on intestinal flora researchers identified these megaphages. Once the authors had reassembled their entire genomes, they saw that all of them were 10 times bigger than the average phage encountered in other microbiomes. To accommodate these phages' bloated genomes, their packaging, called a capsid, is presumably larger than those of other known phages, possibly between 200 and 300 nanometers across.

Researchers found a CRISPR segment in one type of bacteria, Prevotella, that contained snippets of megaphage DNA, suggesting that the megaphage prey on Prevotella primarily. Prevotella is not common in people eating a Westernized diet, with lots of meat, fat and sugar, and fewer gut microbiomes from those eating a non-Western, "hunter-gatherer" type of diet have been sequenced.

Prevotella is also associated with upper respiratory tract infections and is prevalent in periodontal disease, according to coauthor. This means the new megaphage may open up the development of new phage-based treatments for infections caused by Prevotella.

The team named the group or clade of megaphages "Lak phage" after the area of Bangladesh where they found them, Laksam Upazila. Subsequently, first author found Lak phages in the gut microbiomes of members of the hunter-gatherer Hadza tribe of Tanzania, in two separate social groups of baboons that had been studied in Kenya and in the gut microbiota of pigs from Danish farms.

"The Lak phages in the pig are more closely related to humans than baboons are, so it's quite probable that these phages are moving across animal cohorts," the author said. "We suspect that the Prevotella and the Lak phage were pretty recently acquired by the baboons, because the baboons have so little resistance to them and they are so widespread among them."

Phages are known to carry genes that exacerbate many human illnesses. They can carry genes that encode botulism, cholera and diphtheria toxins, for example, making symptoms much worse for those infected with the bacteria. One of teams goal is to see how populations of phage and the bacteria they prey on in the gut change over time and with diet, and how that affects health.

In the four humans whose gut microbiomes were sampled, the team found changing levels of phage and Prevotella over time, indicating a constant cycle where rising populations of phage drive down bacterial populations, followed by a drop in phage that allows Prevotella to rebound.

Banfield speculates that megaphages have larger genomes in order to produce the proteins necessary to prevent the bacterial host from interfering with the phage's efforts to make more copies of itself, a process that takes longer because of the bigger genome.

The lab is to widely deploy CRISPR-Cas9, and searching through other metagenomic databases for megaphage, and hope to learn more about how they work and whether they harbor interesting and potentially useful proteins.

"These genomes are full of proteins of unknown function, probably pathways for processes not even imagined to date. There is a lot of new biology to be discovered in these new genomes," the senior author said.