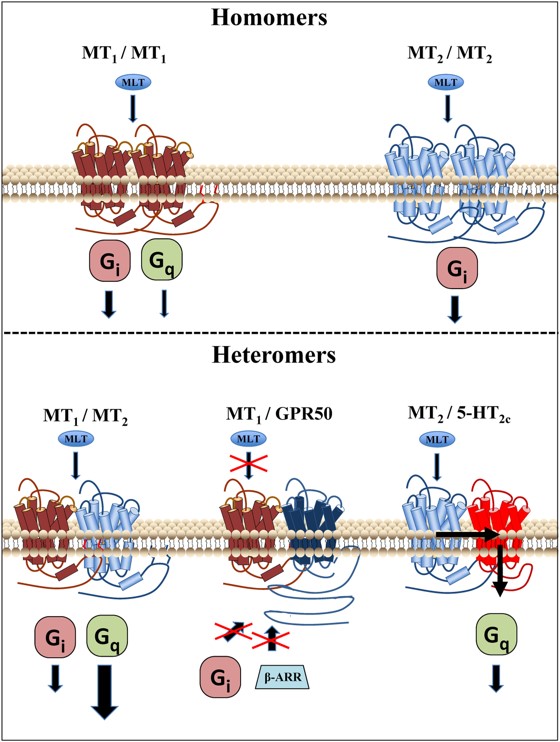 Like breathing or blinking, behaviors regulated by our circadian rhythms, such as digestion and sleep-wake cycles, go unnoticed by most people. But when circadian rhythms malfunction, the result can be any one of a broad range of serious, chronic disorders, from insomnia and depression to obesity, diabetes and bipolar disorder.

A key piece to the puzzle of circadian rhythms and the disorders they're involved in is the hormone melatonin, which the brain produces in the evening, to facilitate falling asleep and fine-tune circadian adjustments.

Now, a team of researchers has discovered through a vast and novel computational library the first molecules that can modulate circadian rhythms by binding with high selectivity to the MT1 melatonin receptor in the biological clock, located in the hypothalamus at the base of the brain.

The research, published in Nature, will greatly facilitate the development of targeted therapies that can either mimic or counteract the actions of melatonin, which is implicated in numerous circadian disorders ranging from depression, blindness, seasonal affective disorder and sleep disorders to difficulties experienced as a result of jet lag and shift work.

"This discovery allows us to now focus on the development of unique new molecules to generate a response that will help bring sleep patterns and other biological rhythms in line with environmental light and dark cycles, providing the sense of well-being that is only experienced when such rhythms are in sync," said the senior author.

Thirty-eight high-ranking molecules were synthesized and tested, revealing ligands in the 470 pM to 6 μM range. Structure-based optimization led to two selective MT1 inverse agonists (UCSF 7447 and UCSF 3384) that never existed before, attach with high strength and selectivity to human or mouse MT1 melatonin receptors. They generate cellular responses opposite to that of melatonin, which provided the rationale for the mouse circadian behavior.

The discovery that the cellular responses seen in vitro translated directly to in vivo function, slowing down adjustment to a new environmental light/dark period in the mouse model of jet lag, with one unexpected finding demonstrating that they mimic melatonin to modulate rhythms in the absence of light cues.

The team found it especially interesting that the two molecules discovered in this study generate two distinct and opposite mouse circadian responses that are dependent on clock time and the environmental light conditions that the animals experience.

"This could be potentially useful to entrain rhythms to the 24-hour day in populations removed from natural light/dark exposure, including the blind as well as some shift workers, submarine workers or those working in extreme environments, such as polar explorers," the author said.

"When the body is exposed to an abrupt change in the light/dark cycle, like what we experience when we travel across continents, there isn't sufficient time for the biological clock to adjust upon reaching the destination," the senior author explained.

"Giving these new molecules at the appropriate clock time under a light/dark cycle would allow us to decelerate our ability to adjust to the new environment, potentially providing a treatment for certain types of jet lag and, more importantly, addressing other conditions affected by circadian rhythm disruptions, such as shift work, sleep disorders and depression," the author said.

This finding reinforces the increased interest in chronopharmacology, the premise of which is that pharmaceuticals given at the time when a patient's biological clock is ready to receive them - given conditions of a precise time of day and environmental lighting - will produce a more effective outcome.

The author said the next step will be to identify the molecular and signaling pathways that translate the response exerted by these molecules from the time they interact with the receptors in the biological clock to the ultimate circadian behavior expressed in a mouse or human.