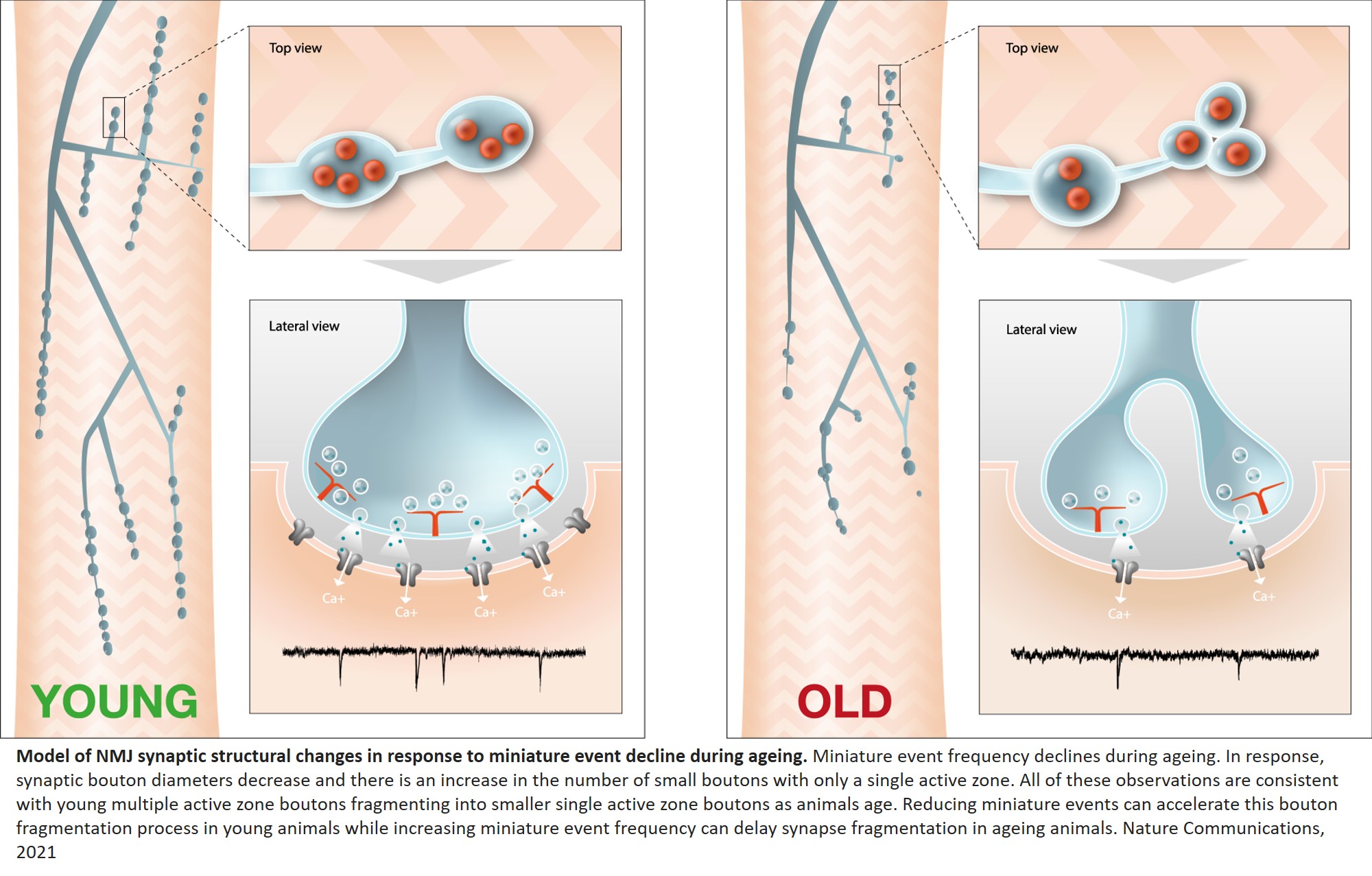 However, some neurotransmitter-packed droplets are released at the synapse even in the absence of electrical impulses. These miniature release events -- or minis -- have long been regarded as 'background noise', says the senior author.

But several studies have suggested that minis do have a function -- and an important one. In 2014, for example, the team showed that minis are important for the development of synapses. If neurons in the brain were a network of computers, evoked releases would be packets of data through which the machines exchange information, whereas minis would be pings -- brief electronic signals that determine if there is a connection between two computers, the senior author says. "Minis are the pings that neurons use to say 'I am connected.'"

To assess whether minis could play a role in the mature nervous system, the authors set out to study a set of neurons that control movement in fruit flies. As the insects aged, their synapses started to break up into smaller fragments, the researchers found. (A similar process occurs in aging mammals, including people.) As nerve junctions broke down, both evoked and miniature neurotransmission were dampened, and the flies showed motor problems such as a reduced ability to climb the walls of a plastic vial.

Next, the team assessed the effects of stimulating or inhibiting evoked and miniature neurotransmission. When both types of neurotransmission were blocked, synapses aged prematurely, suggesting that during aging or in neurological diseases associated with old age, changes in neurotransmission happen before synapses start to crumble. This finding, the author says, upends a longstanding idea in neuroscience. "The idea has long been that the structure of the synapse breaks down, and that causes a functional change in the synapse, but we found it is the other way around," the author says.

Stimulating evoked neurotransmission alone had no effect on aging synapses, the researchers found. However, increasing the frequency of minis kept synapses intact and preserved the motor ability of middle-aged flies at levels comparable to those of young flies. "Motor ability declines in all aging animals, including humans, so it was a delightful surprise to see that we could change that," the author says.

The findings, published in Nature Communications, could have important implications for human health: minis have been found at every type of synapse studied so far, and defects in miniature neurotransmission have been linked to range of neurodevelopmental disorders in children. Figuring out how a reduction in miniature neurotransmission changes the structure of synapses, and how that in turn affects behavior, could help to better understand neurodegenerative disorders and other brain conditions.