Mitochondrial methylation in health and diseases 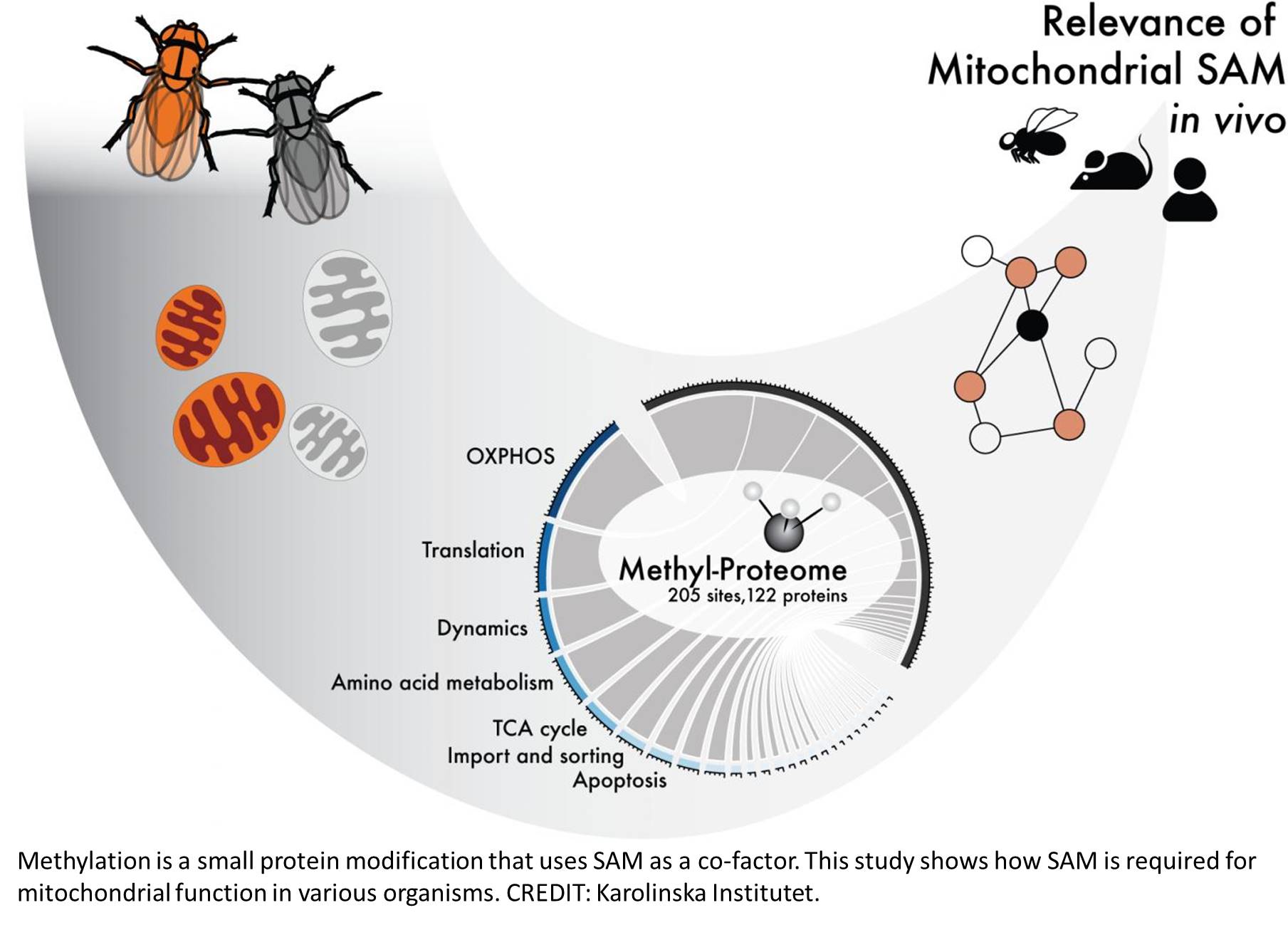 Disorders of the cells' energy supply can cause a number of serious diseases, but also seem to be connected to ageing. More research is needed on mitochondrial function to find future treatments. A new study shows how an important molecule inside the mitochondria affects their function in mice and fruit flies. The study, which is published in Science Advances, adds valuable knowledge on formerly relatively unexplored protein modifications.

In each cell of the body is an organ called the mitochondrion, which converts nutrients in our food to energy. Mitochondria are an essential part of the metabolism, and when things go wrong we can develop serious diseases.

Mitochondrial dysfunction is the hallmark of a group of rare genetic disorders but can also be observed in common diseases such as diabetes, heart disease, neurodegenerative diseases and the normal ageing process.

More research is needed on mitochondria and how they communicate with the rest of the cell if scientists are to find new therapeutic approaches to improve mitochondrial function.

Researchers have now studied how the methylation of proteins affects different mitochondrial processes.

Methylation is a chemical modification in which a methyl group (CH3) is added to a molecule, thereby potentially affecting its function. S-Adenosylmethionine (SAM), also known as AdoMet, is the main methyl group donor within the cell, including inside of mitochondria.

"We're interested in studying this particular molecule since the production of SAM changes in cancer and when we age," says the researcher.

A gradual decline in mitochondrial SAM (mitoSAM) causes hierarchical defects in fly and mouse, comprising loss of mitoSAM-dependent metabolites and impaired assembly of the oxidative phosphorylation system. Complex I stability and iron-sulfur cluster biosynthesis are directly controlled by mitoSAM levels, while other protein targets are predominantly methylated outside of the organelle before import. The mitoSAM pool follows its cytosolic production, establishing mitochondria as responsive receivers of one-carbon units.

"Earlier studies have shown that both SAM and cellular energy levels drop during ageing. Our study suggests a link between these two pathways by demonstrating that low SAM levels can influence mitochondrial energy production."

The study has identified which of the mitochondrial proteins are methylated and how methylation affects them, and how these modifications might affect mitochondrial function. The researchers also demonstrate the physiological consequences of the lack of such changes. However, several questions still need answering.

"Our study has provided an indication that some modifications can be modulated by diet, but we need to continue examining if we can change the pathological process for the better," says the author. "So far we've only looked at protein changes, but other molecules can also be modified by intra-mitochondrial SAM. We have to study these modifications to get a better understanding of the role it plays."