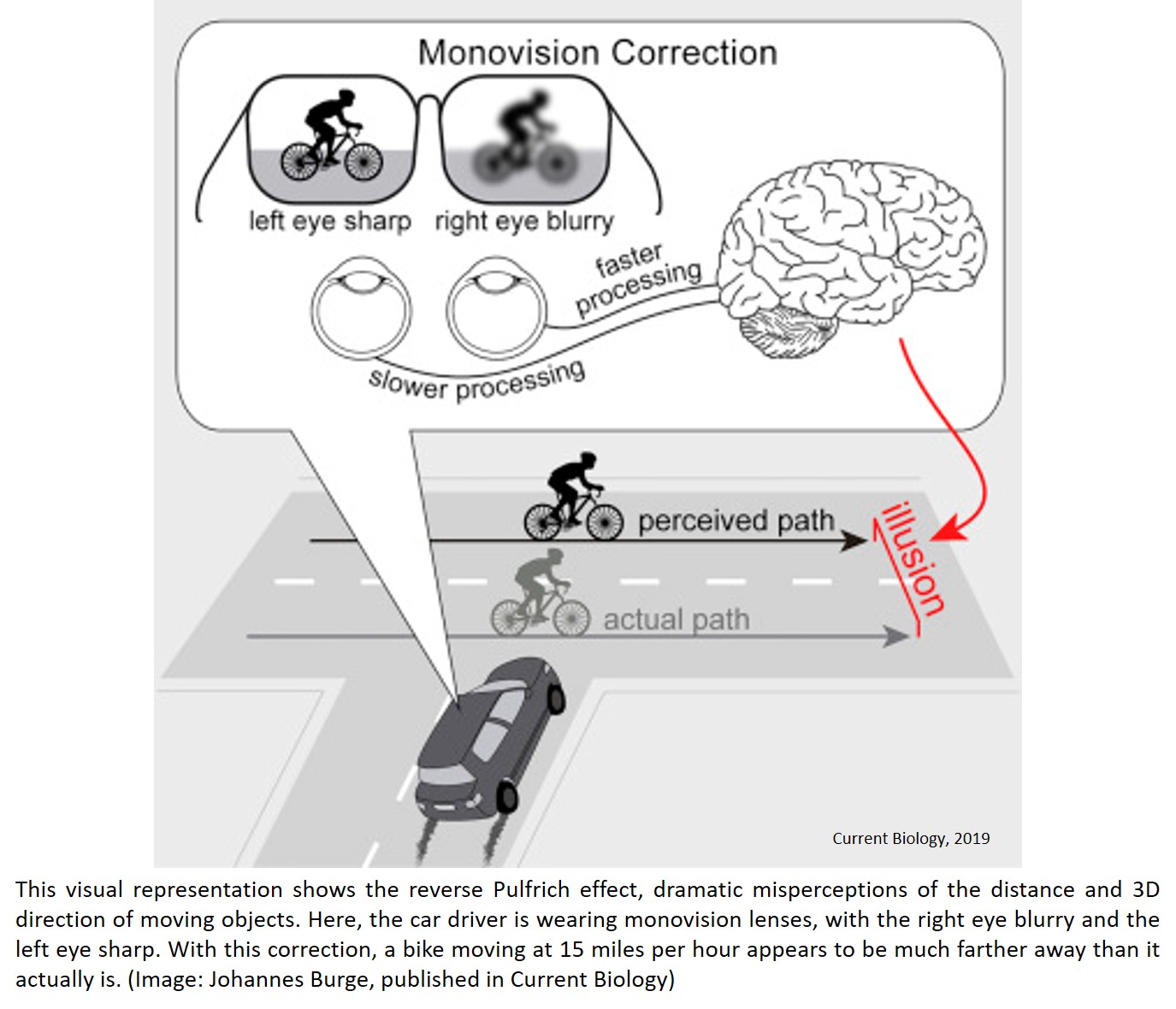 As we age, our eyes lose their ability to focus up close. It's a condition called presbyopia, and it's both extremely common and relatively easy to fix, with solutions like reading glasses, bifocals, or progressive lenses.

Another common correction, called monovision, solves the problem with different lenses in each eye, one that focuses nearby, the other that focuses far away. To adjust for the blur differences caused by wearing different lenses, the brain suppresses the blurrier image and preferentially processes the sharper image, effectively enhancing the depth of field. Ten million people in the United States currently use monovision to correct their presbyopia, and as the population ages that number is likely to grow.

A research team recently discovered that monovision can cause dramatic misperceptions of the distance and 3D direction of moving objects. What's more, the farther away the objects are and the faster they move, the larger the misperceptions become. The researchers published their findings in Current Biology.

"Imagine you're riding in a car, pulling up to an intersection," the senior author says. "A cyclist in cross-traffic is going by at 15 miles per hour. If you calculate it out, the misperception of depth will be about nine feet. That's a big deal--that's the width of a traffic lane."

In general, the lab studies how the human visual system processes the images that fall on the back of the eye when we're sitting in a room or walking down the street. "It seems really simple. We open our eyes and see," the author explains. "But as with most things, when you look under the hood to see how it actually works, it turns out to be a lot more complicated."

This new line of research is closely related to the Pulfrich effect, a 100-year-old perceptual illusion named for German physicist Carl Pulfrich. To understand this effect, picture a clock pendulum swinging from side to side. Viewing the pendulum with one eye darkened, through a pair of sunglasses with one lens missing for example, the pendulum will not appear to move side to side, but rather in an elliptical trajectory that changes depths. The same effect occurs for images with different contrast, like looking through a pair of glasses with one fogged-up lens.

The illusion happens because the brain processes the darker (or less contrast-y) image milliseconds more slowly than the brighter (or more contrast-y) image. For moving images, the processing delay causes what's called a "neural binocular disparity," meaning the actual location of the image on the back of the eye doesn't match where the visual system estimates it to be. A similar principle explains how stereo-3D movies work.

Brightness and contrast variation between the eyes cause the classic Pulfrich effect. Monovision induces blur differences between the eyes, and blur reduces contrast, so the researchers hypothesized that monovision would also lead to the Pulfrich effect. Using an apparatus called a haploscope--essentially, a laboratory version of a 3D movie house--they measured the effect of different monovision-like corrections. Surprisingly, participants experienced a reverse Pulfrich effect rather than a classic one. Instead of being processed more slowly, the blurry image was processed milliseconds faster than the sharp image.

The senior author had a guess for why: "Blurring an image doesn't change the contrast uniformly; instead it reduces the contrast of the fine details more than that of the coarse details."

The offers as an example what happens when looking through a camera lens. "As the image goes out of focus, first you lose the pinstripes in my shirt and the hairs of my eyebrow. Then you lose the medium details. And finally, the coarse details," the author explains. "Neuroscience has shown that the brain processes fine details more slowly than coarse details, all else being equal. Thus, we reasoned that the blurry image gets processed faster because the fine details in the sharp image are slowing it down. Additional experiments showed this reasoning was correct."

With the reverse Pulfrich effect identified, the researchers wanted a fix. "A darker lens slows down processing. A blurry lens speeds it up," the senior author says. "We thought, if you darken the blurring lens, the two effects may cancel out. And that's exactly what happens."

The current work answers some questions, but also brings up many more: How does overall light level impact the effect? Is it worse at dusk or nighttime? Does the brain adapt to the illusion once someone acclimates to monovision? It's great fodder for future research, work that could have real implications for public health and public safety.