More than one part of brain is involved in motor learning 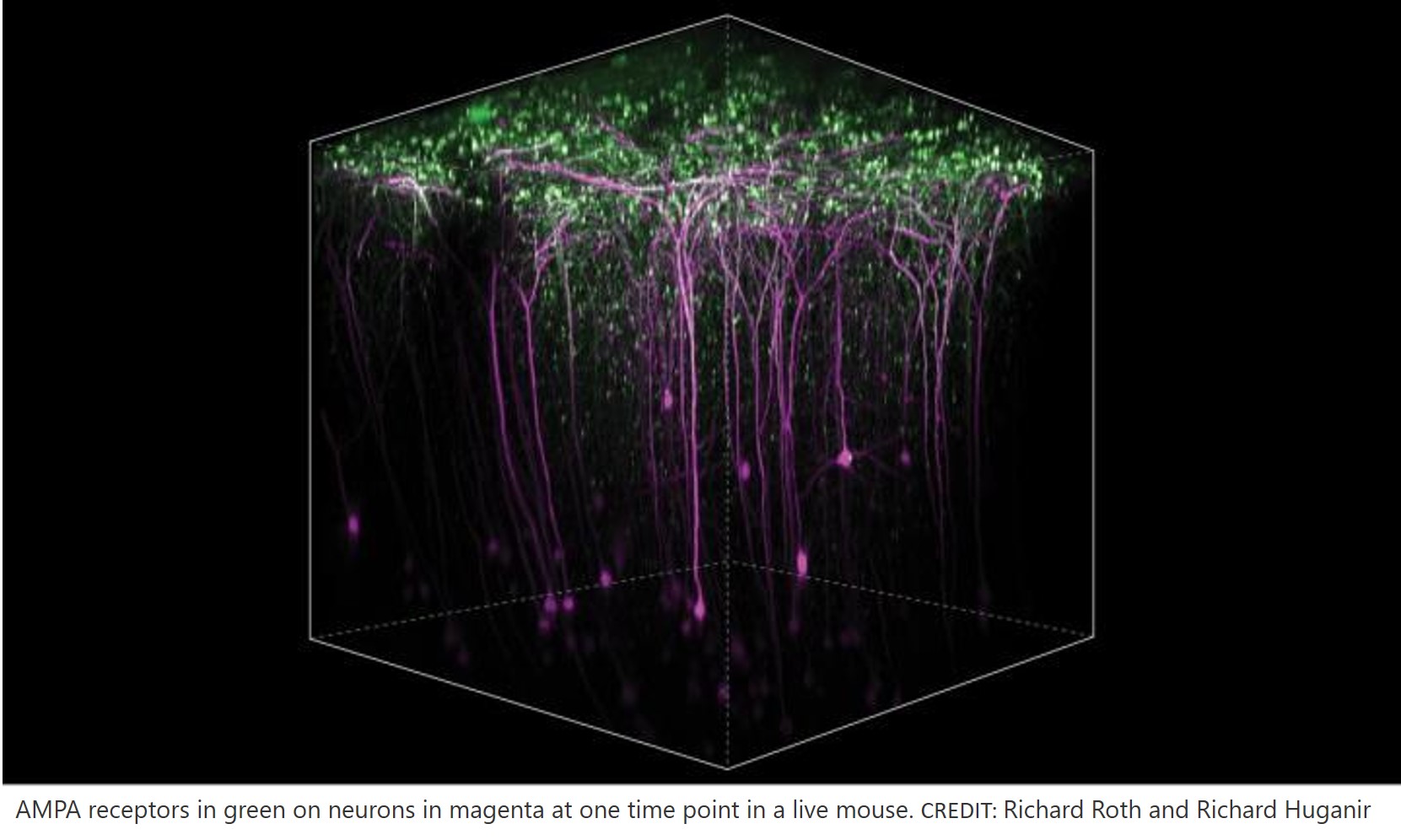 Researchers have successfully used a laser-assisted imaging tool to "see" what happens in brain cells of mice learning to reach out and grab a pellet of food. Their experiments, they say, add to evidence that such motor-based learning can occur in multiple areas of the brain, even ones not typically associated with motor control.

"Scientists should be looking at the entire brain to understand specific types of learning," says the senior author. "Different parts of the brain contribute to learning in different ways, and studying brain cell receptors can help us decipher how this works."

The work, say the researchers, may ultimately inform efforts to develop treatments for learning-based and neurocognitive disorders.

In a report on the work, appearing in Neuron, the team say they focused on AMPA-type glutamate receptors, or AMPARs, key molecules that help send messages between brain cells called neurons. AMPARs function like antennas that form along the surface of a particular spot on neurons called a synapse, where it receives molecular signals from other neurons.

To monitor and measure AMPAR levels in mouse brains, scientists previously had to dissect the organ before and after a learning experiment and compare differences. Now, scientists have ways to directly view the brain during learning, recording thousands of synapses at a time.

In the new experiments, scientists injected DNA-encoding AMPARs carrying a fluorescent tag into the brains of mice, and used an electrical pulse to get neurons to absorb the AMPAR DNA. Next, with a tool called two-photon microscopy, the scientists used a laser -- essentially an intensely focused beam of light -- to detect and measure the amount of fluorescence coming from the tagged AMPARs.

More fluorescence is an indication of increased AMPAR activity and messaging between neurons, a good sign that learning and memory building is taking place in those neurons, the senior author says.

To "see" what learning looked like in the test animals' neurons, the team trained mice to reach for and grab a food pellet placed just outside their cage using their paws. Normally, mice get pellets with their mouths.

While the mice were learning how to reach for the pellet, the scientists found an approximately 20% increase in the activity of AMPARs in an area of the brain known as the motor cortex, which is known for controlling and precisely moving muscles. On neurons, the AMPARs look like lights on a Christmas tree and glow brighter with increasing activity.

But the experiments also showed the same increase in AMPAR activity levels in the visual cortex too.

"This made sense because vision is very important for motor control," says the lead author. "So, we did the same experiment again, but with the lights switched off," says the author.

Using infrared light, which the mice couldn't see, the mice eventually learned to successfully grab the food, but there was a smaller increase (10%) in the activity of AMPARs in the visual cortex.

"We believe the mice brains are using different sets of sensory cues in the dark to learn the motor task, including touch and smell, enabling these other senses to take over," says the author.

Next, the research team repeated the experiments using specialized light-activated modulators to shut down neurons in either the motor or visual cortex.

However, mice initially trained to grab the pellet in the dark could still complete the task, even if their visual cortex was shut down.

"We've traditionally thought that motor-based learning happens solely in the motor part of the brain, but our studies and others now show that it's not as specific as we had thought. There is more of a brainwide effect in learning," says the author.

The senior author notes that among the genes that control neuronal receptors involved in learning is SYNGAP. His and others' research has shown that when the gene is mutated, it contributes to conditions including intellectual disability, autism and schizophrenia -- all conditions marked in part by disrupted thinking and learning.