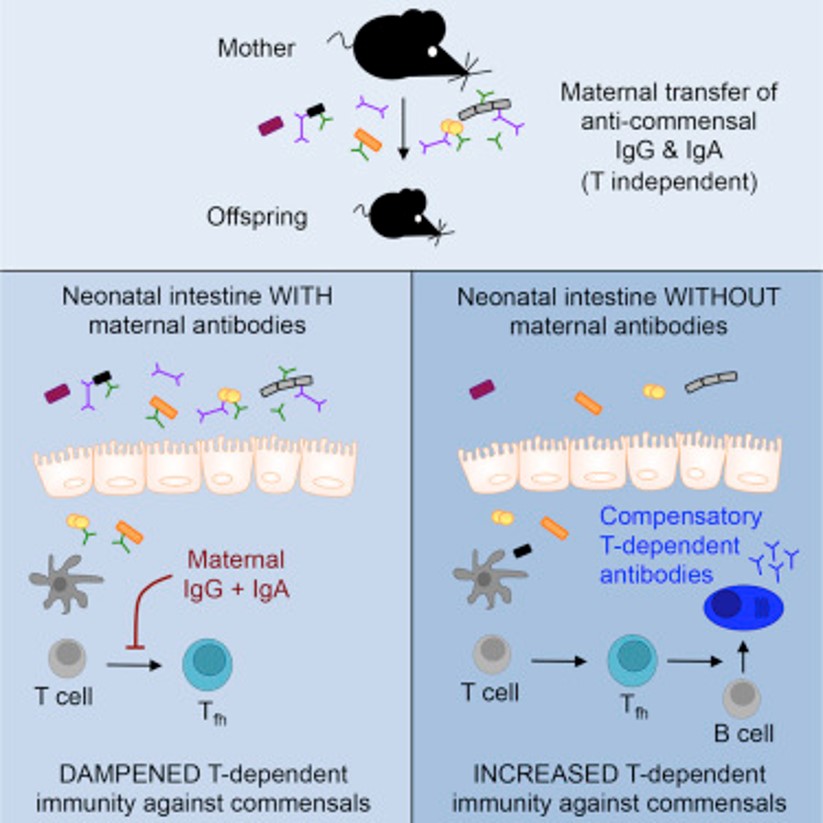 Mother's milk has been long touted for its salutary effects on the newborn and its ability to shield infants from certain infections.

Now research conducted in mice shows that at least part of its protective effects come from a surprising source: the microbes residing in maternal intestines.

The new study, published in Nature, shows that antibodies made in response to one particular organism in the maternal gut are passed on to the offspring both via milk and through the placenta to protect newborn pups from infection by at least one disease-causing, and potentially lethal, microbe, E. coli.

The findings add to a growing body of evidence pointing to the potent role of the microbiota--the trillions of microbes that dwell in the gut, skin, mouth and other parts of the bodies of mammals, including humans--in disease and health.

But the new research goes a step further--it specifically identifies maternal microbiota as source of newborn immunity. It further suggests that the intestinal microbiota could offer immune protection even when mothers have had no prior encounters with an infection that allows them to build and pass on protective antibodies to their offspring.

"Our results help explain why newborns are protected from certain disease-causing microbes despite their underdeveloped immune systems and lack of prior encounters with these microbes," said study senior investigator. "Moreover, they raise the possibility that mothers can confer immune protection to their offspring even to pathogens that they haven't themselves encountered in the past."

If affirmed through further studies, the findings could inform the design of microbial therapies against dangerous infections such as E. coli and other disease-causing organisms, the researchers said.

"Albeit preliminary, we are hopeful these insights could inform the development of vaccines derived from commensal microbial molecules as a way to prevent infectious diseases," said the senior author. "Another therapeutic avenue could be the use of commensal microbes as probiotics that protect against diarrheal disease."

Without any prior exposure to microbes, a newborn's immune system is a blank slate. For the first three weeks, a newborn's immune protection is derived entirely from maternal antibodies passed onto the fetus during pregnancy via the placenta, during birth via the birth canal, and shortly after birth via breastfeeding.

The researchers were also able to pinpoint the specific organism responsible for inducing the formation of the protective antibodies--a microbe called Pantoea, member of the Enterobacteriaceae bacterial family, which resides in the intestines of mice and other mammals, including humans.

Furthermore, the experiments showed that the antibodies enter both the intestines and bloodstream of newborns via the neonatal Fc receptor, a molecular channel on the placenta that helps ferry protective antibodies from the mother to the growing fetus.

Thus far, the receptor has been known to transfer antibodies through the placenta. However, the experiments conducted in the new study show this receptor also absorbs antibodies derived from milk and ferries them from the intestines and into the bloodstream of the newborn mice, ensuring wider, systemic protection beyond the gut. Adult mice, in which this neonatal receptor loses its function with age, did not transfer protective antibodies from their gut to the bloodstream, the experiments showed.