Networking of retinal ganglion cells in the womb 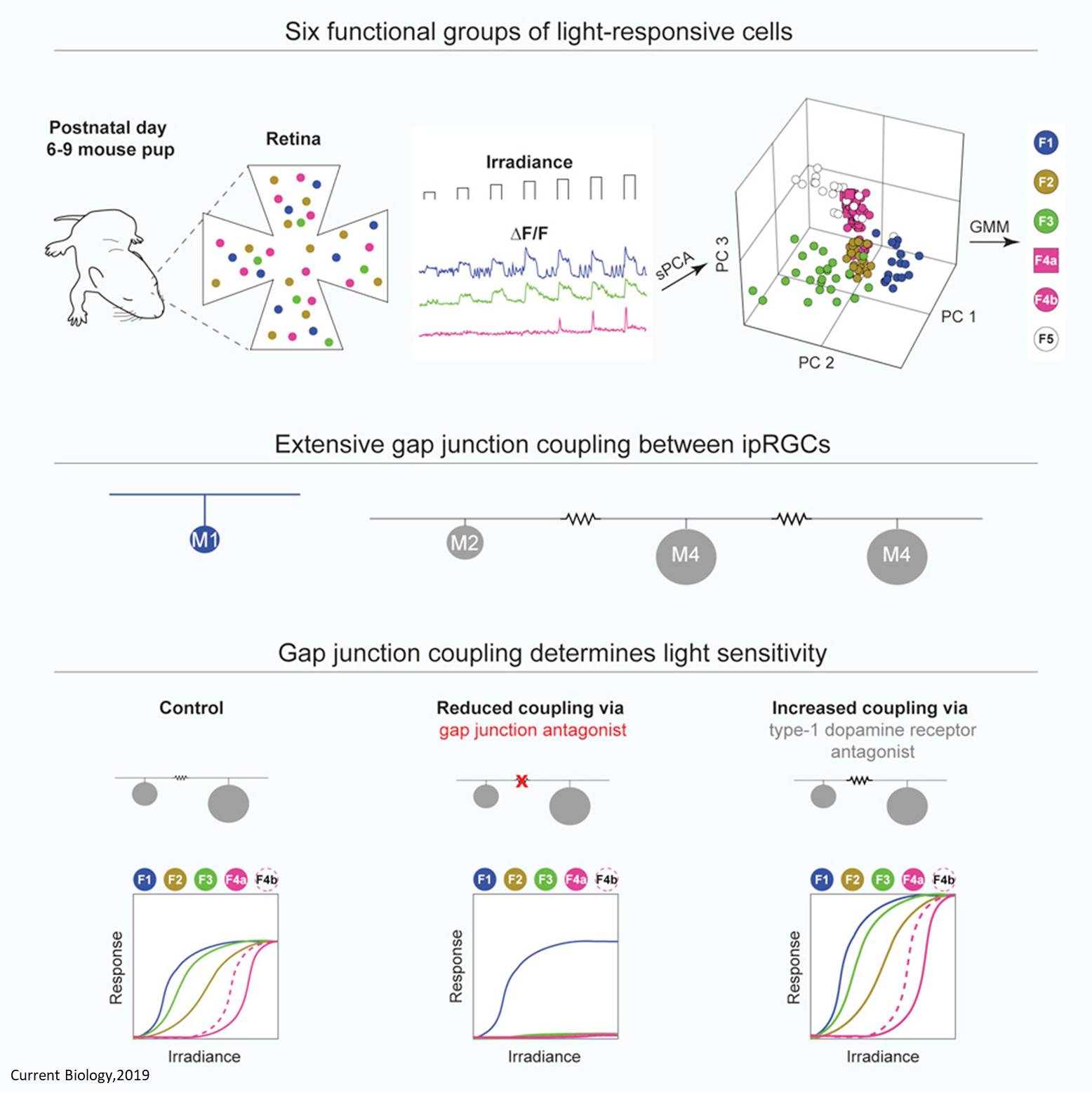 By the second trimester, long before a baby's eyes can see images, they can detect light.

But the light-sensitive cells in the developing retina -- the thin sheet of brain-like tissue at the back of the eye -- were thought to be simple on-off switches, presumably there to set up the 24-hour, day-night rhythms parents hope their baby will follow.

The scientists have now found evidence that these simple cells actually talk to one another as part of an interconnected network that gives the retina more light sensitivity than once thought, and that may enhance the influence of light on behavior and brain development in unsuspected ways.

In the developing eye, perhaps 3% of ganglion cells -- the cells in the retina that send messages through the optic nerve into the brain -- are sensitive to light and, to date, researchers have found about six different subtypes that communicate with various places in the brain. Some talk to the suprachiasmatic nucleus to tune our internal clock to the day-night cycle. Others send signals to the area that makes our pupils constrict in bright light.

But others connect to surprising areas: the perihabenula, which regulates mood, and the amygdala, which deals with emotions.

In mice and monkeys, recent evidence suggests that these ganglion cells also talk with one another through electrical connections called gap junctions, implying much more complexity in immature rodent and primate eyes than imagined.

"Given the variety of these ganglion cells and that they project to many different parts of the brain, it makes me wonder whether they play a role in how the retina connects up to the brain," said the senior author of a paper that appeared in the journal Current Biology. "Maybe not for visual circuits, but for non-vision behaviors. Not only the pupillary light reflex and circadian rhythms, but possibly explaining problems like light-induced migraines, or why light therapy works for depression."

The cells, called intrinsically photosensitive retinal ganglion cells (ipRGCs), were discovered only 10 years ago. "We thought they (mouse pups and the human fetus) were blind at this point in development," said the author. "We thought that the ganglion cells were there in the developing eye, that they are connected to the brain, but that they were not really connected to much of the rest of the retina, at that point. Now, it turns out they are connected to each other, which was a surprising thing."

The lead author combined two-photon calcium imaging, whole-cell electrical recording, pharmacology and anatomical techniques to show that the six types of ipRGCs in the newborn mouse retina link up electrically, via gap junctions, to form a retinal network that the researchers found not only detects light, but responds to the intensity of the light, which can vary nearly a billionfold.

Gap junction circuits were critical for light sensitivity in some ipRGC subtypes, but not others, providing a potential avenue to determine which ipRGC subtypes provide the signal for specific non-visual behaviors that light evokes.

"Aversion to light, which pups develop very early, is intensity-dependent," suggesting that these neural circuits could be involved in light-aversion behavior, another author said. "We don't know which of these ipRGC subtypes in the neonatal retina actually contributes to the behavior, so it will be very interesting to see what role all these different subtypes have."

The researchers also found evidence that the circuit tunes itself in a way that could adapt to the intensity of light, which probably has an important role in development, the senior author said.

"In the past, people demonstrated that these light-sensitive cells are important for things like the development of the blood vessels in the retina and light entrainment of circadian rhythms, but those were kind of a light on/light off response, where you need some light or no light," the author said. "This seems to argue that they are actually trying to code for many different intensities of light, encoding much more information than people had previously thought."