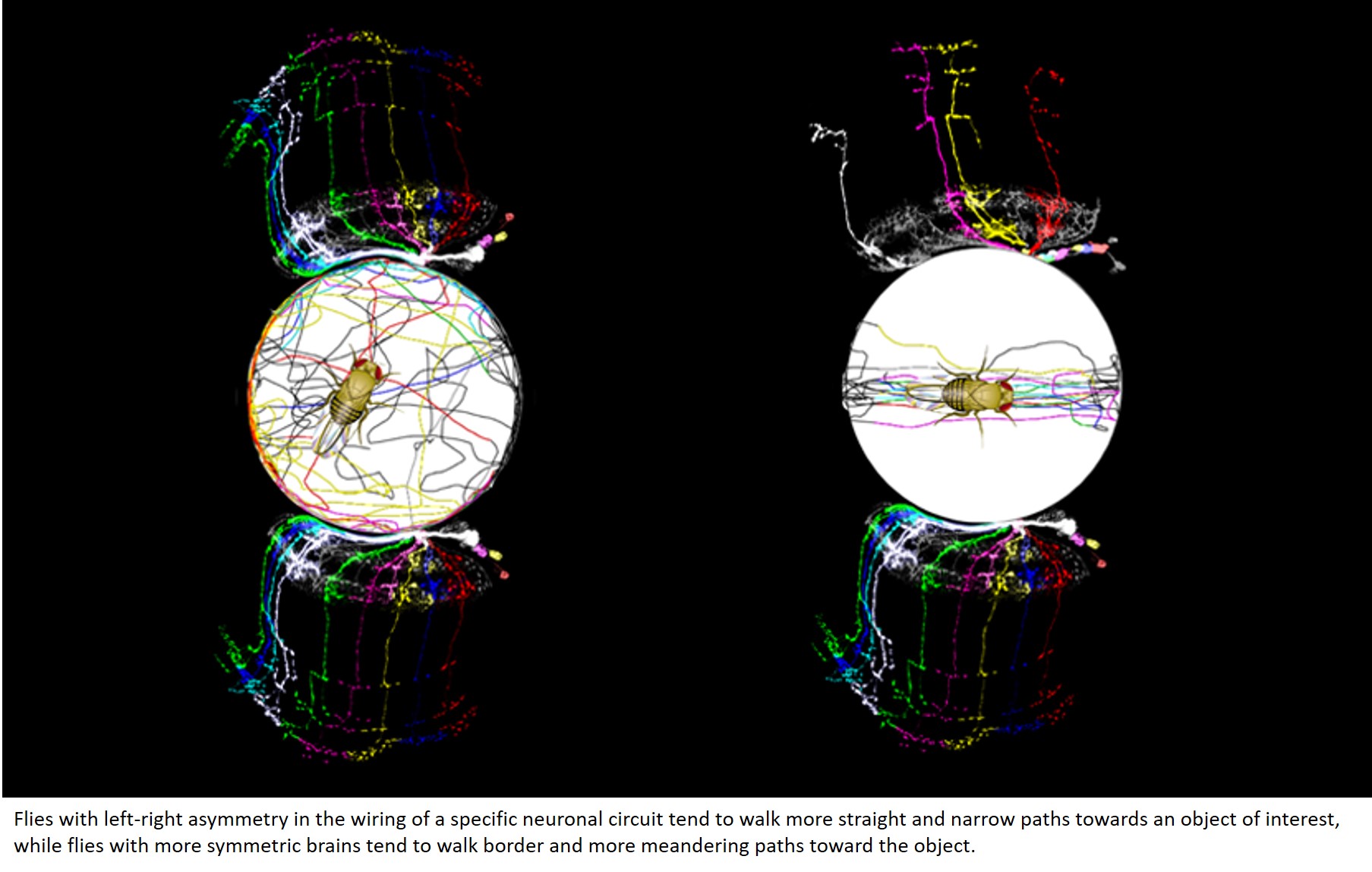 The idea that brain circuits regulate behavior is pretty straightforward notion. If a circuit is different between individuals, then it might influence their behavior individually. This could explain some of the behavioral idiosyncrasy present in population. But how to demonstrate this idea in an experimental setting?

The team have been working on this specific circuit of the brain, a visual system circuit called Dorsal Cluster Neurons (DCN) for several years. They had identified a stochastic anatomical and developmental variability in this system meaning that the brain of one fly develop slightly differently from the brain of another fly and as soon as the development is finished, that pattern is stable throughout the fly’s life.

But what about behavior? Is it as stable and unique as the circuit? To delve that question, the team started to test this behavior in flies for several weeks checking and showed this behavior remained constant in an individual fly but differed between flies. Moreover, they observed that with every generation the entire variance of the behavior was reset, meaning that the behavioral individuality was more the result of the unique development of each brain, than the specific genome of each individual.

“Now we had the behavior and the circuit, both unique to an individual fly and stable over time, but what is the link between the two?”

To explore this question, they conducted a series of experiments. By modifying the wiring in the flies’ brain and silencing DCN, an expertise they gathered from more than 10 years working on that circuit, they showed that the strongest anatomical correlate was left-right asymmetry in the wiring of a specific area that correlate with narrow or wide a path a fly would take toward an object. Not only that, but also a causal link between the circuit and behavior when rewiring the circuit happened to shift the flies’ behavior while maintaining the correlation between the circuit and the behavior in individual flies. These results established that the way the circuit develops causally underlies to a certain significant extent, the way the animal behaves.

“The idea that there is something innate about certain aspects of idiosyncrasy, that we would call “personality” in human psychology, and that it originates in the brain, is a very old idea. For the first time we can pinpoint to a clear distinctive brain-based origin for a parameter of what we could call an animal’s personality. The fact that it is due to developmental mechanisms that cannot be predicted either by the environment alone or the genome alone but from the phenomenon of stochastic developmental noise is super exciting. We are lucky enough to begin to solve two mysteries at the same time.

Doing this very basic research for a long time, which had no other obvious goal than understanding how the brain develops, and being able to show that by taking those approach and slowly building a knowledge base about a certain question you are interested in simply by curiosity-driven science, is extremely satisfying and a real reward for the effort of so many people in the tea,” concludes the author.