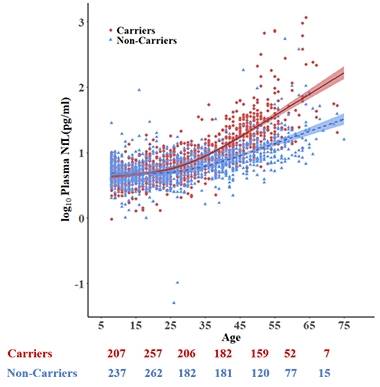 According to researchers neurofilament light chain (NfL) has great potential as a biomarker for early detection of Alzheimer's disease and could be also useful for monitoring treatment response for that condition.The work was published recently in The Lancet Neurology.

The authors found that NfL levels increased with age among people at genetic risk because of a specific mutation (PSEN1 E280A) and began to differentiate carriers from noncarriers at age 22, an average of 22 years before their estimated age of cognitive impairment (age 44).

Neurofilament light chain (NfL) is a biomarker of neurodegeneration - damage to neurons. Measures of NfL concentrations in cerebral spinal fluid (CSF) and blood have been used to detect and track neurodegeneration in individuals with Alzheimer's disease and other brain disorders.

The team used an ultra-sensitive single molecule array immunoassay to measure NfL concentrations in serum and plasma. Earlier studies have shown close correlations between blood-based and CSF measurements in people and animal models of neurodegenerative diseases.

Plasma NfL measurements increased with age in both groups (p<0·0001), and began to differentiate carriers from non-carriers at 22 years - the estimated median age of onset of mild cognitive impairment is 44 years. The ability of plasma NfL to discriminate between carriers and noncarriers only reached high sensitivity close to the age of clinical onset.

"Our findings add to the growing evidence that blood-based NfL can be useful in detecting neurodegeneration, starting with very early, subtle elevations way before the onset of clinical symptoms. We need more studies to further explore NfL as a way to inform prognosis and evaluate treatments in Alzheimer's disease," says the author.