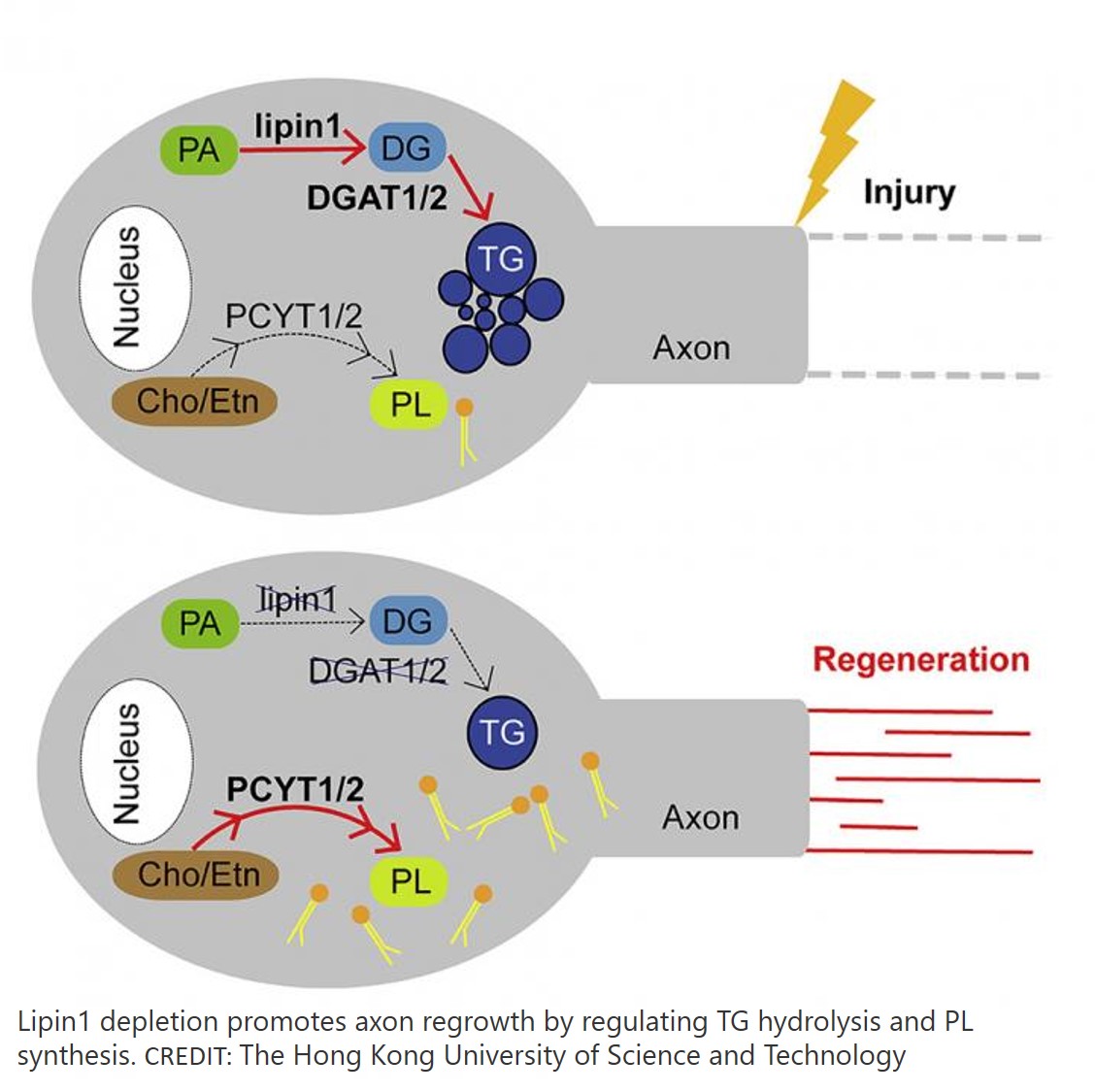 Typical examples include paralysis due to a spinal cord injury and visual field atrophy or even complete blindness due to optic nerve atrophy in glaucoma patients. Therefore, in-depth study of the basic biological processes that affect axon regeneration is particularly important for human health. Traditional research on axon regeneration has focused on the cytoskeleton, with a few studies exploring cell membranes. However, because the nervous system is rich in lipids, and the axon regeneration process requires a large amount of lipids to participate in the formation of cell membranes, related research is of great significance. The role of neuronal lipid metabolism on axon regeneration is a mystery that is still waiting to be solved.

For the first time, it was found that regulating the glycerolipid metabolism of neurons can promote the regeneration of axons of central neurons after injury.

Researchers first knocked down key genes that are involved in fatty acid metabolism, cholesterol synthesis, and the glycerol phosphate pathway in dorsal root ganglion (DRG) neurons, which were cultured in vitro. After item-by-item testing, it was found that knocking down a gene called lipin1 can significantly promote DRG neurite growth. This indicates that lipid metabolism in neurons has an important effect on the axon regeneration process.

Lipin1 has two main functions: participating in the synthesis of diglycerides and regulating gene expression in the nucleus. To determine which function is related to axon regeneration, researchers have overexpressed the lipin1 gene with a phosphatase function mutation and nuclear localization sequence deletion in the retinal ganglion cells with lipin1 depletion. They found that its phosphatase function is the main factor affecting axon regeneration.

Researchers also tested the effects of lipin1 elimination on neuronal lipid metabolism to explore which components affect axon regeneration. Their measurements showed the following: cholesterol and fatty acid content in neurons did not change significantly after lipin1 elimination; triglyceride content was significantly reduced; and the PC and PE levels had significantly increased. This suggests that lipin1 may cause neurons to synthesize triglycerides rather than phospholipids. What effect do triglycerides and phospholipids have on axon regeneration?

The current state of this research was aptly summarized by the senior author: "This research provides a new direction for the study of the axon regeneration in the central nervous system. The results provide a new explanation for the difference between the regeneration capacity of the central and peripheral nervous systems, and it may provide new translational targets for CNS injury."

What makes the brain tick so fast?

First 3-D structure of the enzymatic role of DNA