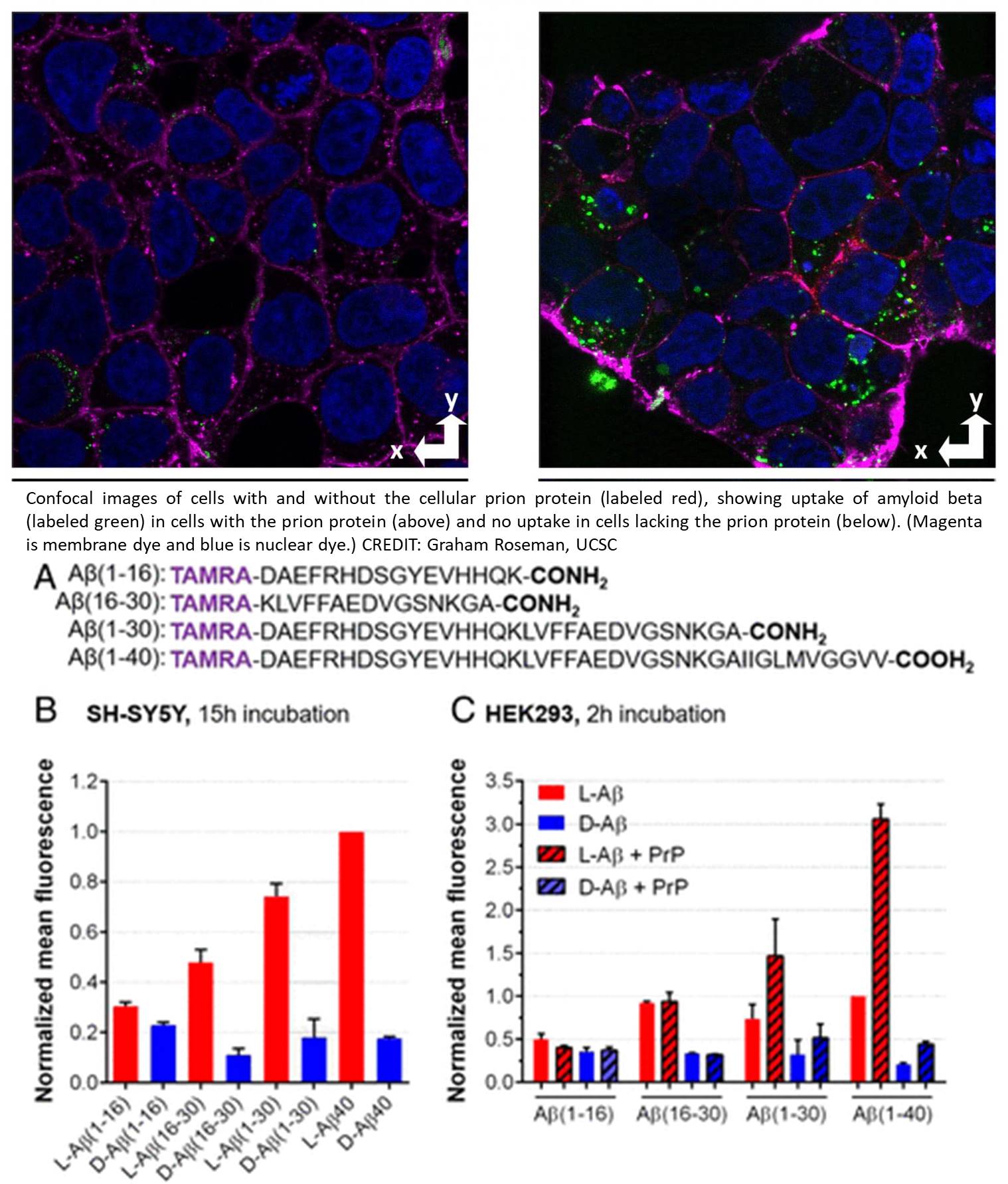 One of the hallmarks of Alzheimer's disease is the formation of amyloid plaques--sticky clumps of a protein called amyloid beta--that collect between neurons in the brain. Increasingly, however, attention has turned from these insoluble plaques to soluble forms of amyloid beta that can be taken up into neurons and are highly neurotoxic.

A new study pinpoints a segment of the amyloid beta protein that is recognized by receptors involved in neuronal uptake of this toxic peptide. The researchers used a novel approach to study the mechanisms of cellular uptake of amyloid beta. Their findings, published in Proceedings of the National Academy of Sciences, suggest that targeting this process may be a promising approach for Alzheimer's drug development.

"There are many different ways that amyloid beta can be toxic inside cells, so wouldn't it be nice if we could block its uptake by neurons? This is a pathway we can target," said corresponding author.

The researchers took an approach using mirror-image versions of amyloid beta to show that cellular uptake is mostly mediated by receptors on the cell surface. In the earlier work, researchers compared the uptake of natural amyloid beta with a synthetic version in which the arrangement of the atoms in the protein's amino acids is a mirror image of the natural arrangement. This rearrangement subtly changes the protein's structure in ways that would interfere with its binding to a receptor, so the finding that cellular uptake of the mirror-image version was greatly reduced pointed to receptor-mediated uptake.

After testing all the peptides in the library for cellular uptake, they found that amino acids 1-30 showed the same stereoselectivity as full-length amyloid beta, with much greater uptake of the L form than the D form. In addition, this segment is completely soluble and does not form aggregates because it is missing a long hydrophobic domain involved in the aggregation of amyloid beta into clumps and fibrils.

"With this shortened amyloid beta, we are able to decouple cellular uptake from aggregation, giving us a great model for studying uptake," the senior author said.

The non-aggregating amyloid beta segment 1-30 showed the same prion-dependent uptake and stereoselectivity. The researchers also used nuclear magnetic resonance spectroscopy to gather detailed information about the interactions involved in the binding of amyloid beta to the cellular prion protein.

Their findings show that the binding of amyloid beta at the cell surface, leading to its internalization, is largely due to the amino acid sequence 1-30 and not the state of aggregation. When amyloid beta molecules begin to aggregate, they form "oligomers" consisting of a small number of molecules stuck together that are still soluble and can be taken up by neurons. These soluble oligomers are increasingly considered to be the form of amyloid beta that triggers the pathological processes leading to Alzheimer's disease, but there are many different aggregated forms.

"There are different levels of aggregation, different sizes and types of oligomers, and a big question has been which forms are internalized and cause neurotoxicity," the aitjpr said. "Our findings suggest that any form in which that sequence of amino acids is exposed will bind to the prion protein."

According to another author, "The initial steps leading to Alzheimer's disease may be the prion protein-mediated transport of soluble amyloid beta into neurons, where it then clumps, forming toxic aggregates that ultimately lead to the characteristic plaques associated with the disease."

Although the prion protein seems to be responsible for most of the amyloid beta uptake, the study suggests other receptors may offer alternate routes. Nevertheless, drugs that target the 1-30 segment of amyloid beta or the sites it binds to on receptors may hold therapeutic potential for treating Alzheimer's disease.

"Our findings open up new avenues for understanding Alzheimer's and suggest promising strategies for therapeutics," the author said.