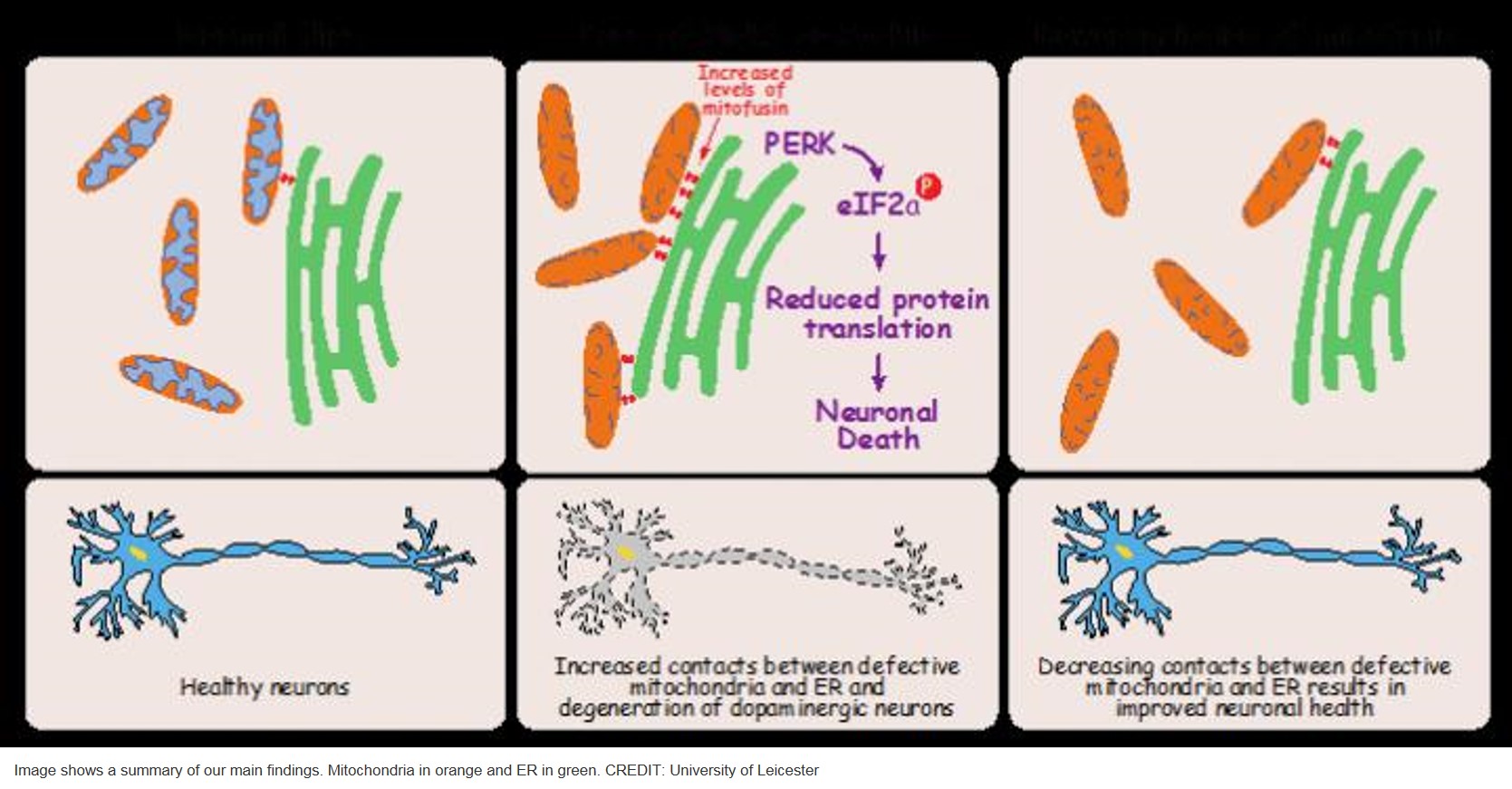 The neurodegeneration that occurs in Parkinson's disease is a result of stress on the endoplasmic reticulum in the cell rather than failure of the mitochondria as previously thought, according to a study in fruit flies. It was found that the death of neurons associated with the disease was prevented when chemicals that block the effects of endoplasmic reticulum stress were used.

Some inherited forms of early-onset Parkinson's disease have typically been blamed on poorly functioning mitochondria, the powerhouses of cells. Without reliable sources of energy, neurons wither and die. This may not be the complete picture of what is happening within cells affected by Parkinson's. Researchers from the MRC Toxicology Unit at the University of Leicester used a common fruit fly to investigate this further; fruit flies were used because they provide a good genetic model for humans.

Studies on human subjects are of limited use for elucidating the signaling pathways and cellular processes underlying the neurodegenerative process. This is because both ethical and technical constraints limit the extent to which genetic analysis can be performed in humans.

Flies are a well-established model animal to understand the molecular mechanisms of human diseases. This is because about 75% of human disease-causing genes are found in the fly in a similar form. Also, they are easy to work with, breed quickly and many tools are available to manipulate any genes in the fly. In flies, potential therapeutic drugs can be mixed with food and readily tested.

It was found that the bulk of the damage to neurons with damaged mitochondria stems from a related but different source - the neighbouring maze-like endoplasmic reticulum (ER).

The ER has the important job of folding proteins so that they can do the vast majority of work within cells. Misfolded proteins are recognized by the cell as being dangerous. Cells halt protein production if there are too many of these harmful proteins present. While this system is protective, it also stalls the manufacture of vital proteins, and this eventually results in the death of neurons.

To find out if ER stress might be at play in Parkinson's, research team analyzed fruit flies with mutant forms of the pink1 or parkin genes. Mutant forms of pink1 and parkin are already known to starve neurons from energy by preventing the disposal of defective mitochondria. These genes are also mutated in humans and result in hereditary versions of the disease. Much like Parkinson's patients, flies with either mutation move more slowly and have weakened muscles. The insects struggle to fly and they lose dopaminergic neurons in their brains - a classic feature of Parkinson's.

Compared to normal flies, the team found that the mutants experienced large amounts of ER stress. The mutant flies did not manufacture proteins as quickly as the non-mutants. They also had elevated levels of the protein-folding molecule BiP, a telltale sign of stress.

One function of pink1 and parkin genes is to help degrade mitofusin - a protein that tethers the endoplasmic reticulum to mitochondria. Mutant flies have an abundance of this protein. It was found that the mutants had more of their mitochondria attached to the ER than normal flies. For this reason, the researchers suggest that ER stress is related to extra tethering of mitochondria, thereby preventing the removal of defective versions of the organelle.

Mutant flies, which have more of these tethers, have fewer dopaminergic neurons, which can have an adverse effect on the brain. By reducing the number of these tethers it is possible to prevent the loss of the neurons. When the researchers experimentally lowered the amount of mitofusin in the mutants, the number of tethers fell and the neuron number increased again (see figure). The flies' muscles also remained healthy despite the mitochondria themselves still being defective.

These results suggest that the neurodegeneration seen in Parkinson's is a result of ER stress rather than a general failure of the mitochondria. The scientists were able to prevent neurodegeneration in mutant flies not only by reducing mitofusin, but also with chemicals that block the effects of ER stress.

Author said: "This research challenges the current held belief the Parkinson's disease is a result of malfunctioning mitochondria. By identifying and preventing ER stress in a model of the disease it was possible for us to prevent neurodegeneration. Lab experiments, like this, allow us to see what effect ER stress has on Parkinson's disease. While the finding so far only applies to fruit flies, we believe further research could find that a similar intervention in people might help treat certain forms of Parkinson's."