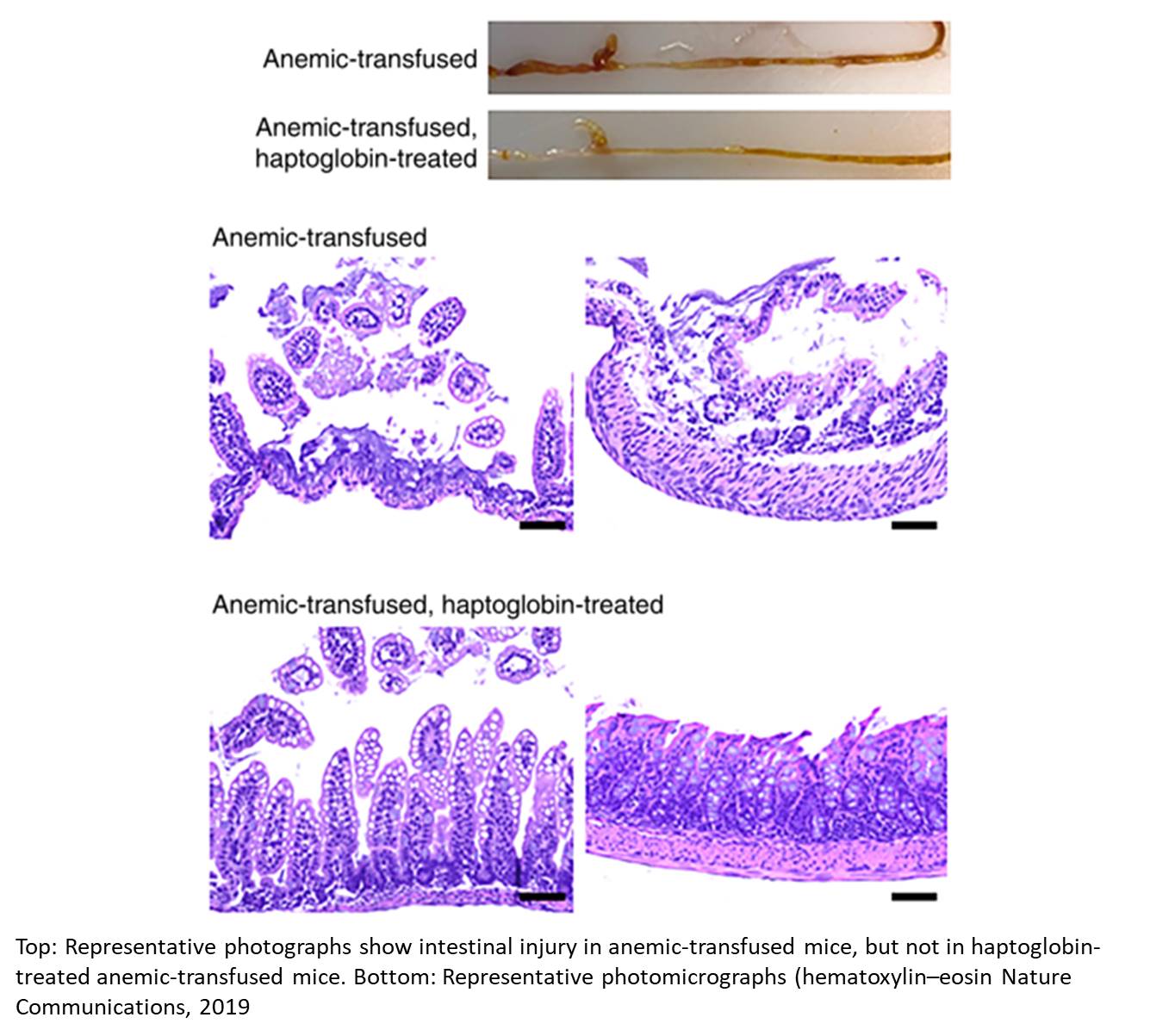 Physicians have long suspected that red blood cell transfusions given to premature infants with anemia may put them in danger of developing necrotizing enterocolitis, a potentially lethal inflammatory disease of the intestines. However, solid evidence for the connection has been difficult to obtain in part because of the lack of a practical animal model able to accurately represent what physically occurs when a baby gets NEC.

Now, researchers have developed that model -- believed to be the first of its kind -- using infant mice, or pups, that are first made anemic and then given blood transfusions from neonates of a different mouse strain. The new method, the researchers say, mimics what happens when blood transfusions are given to human babies from a non-related donor.

A description of the mouse model, along with significant findings and potential benefits from its first uses, is published in a new paper in the journal Nature Communications.

"We needed a working live mouse model in order to learn if a blood transfusion alone leads to NEC or does it only happen if the transfusion is given when anemia is present," says  the senior author of the research paper.

Seen in approximately 10% to 12% of infants weighing less than 3.5 pounds at birth, NEC is a rapidly progressing gastrointestinal emergency in which bacteria invade the wall of the colon, causing inflammation that can ultimately destroy healthy tissue at the site. If enough cells are necrotized (killed) that a hole results in the intestinal wall, fecal material can enter the bloodstream and cause life-threatening sepsis.

The research studies have repeatedly shown that babies born prematurely who are severely anemic -- those with a proportion of red blood cells to total blood volume between 20% and 24% at birth -- can develop NEC within 48 hours after receiving a red blood cell transfusion. By comparison, the American Academy of Pediatrics says that babies delivered at term normally have red blood cell volumes between 42% and 65%, dropping to between 31% and 41% at age 1.

In search of a useful and practical mouse model, researchers had to overcome a size problem. "Newborn mouse pups are about the size of a quarter and weigh less than an ounce, so it's extremely difficult to remove enough blood from them for laboratories to analyze," the senior author says.

To get past that obstacle, a private medical diagnostic equipment company donated the use of its advanced blood analysis system that only requires a 5 microliter (5 millionths of a liter) sample instead of the 50 microliters -- 60% of a mouse pup's total blood supply -- that most testing labs require.

Next, the researchers designed a procedure to induce severe anemia in the pups by removing about half of their blood volume every other day for 10 days after birth. This dropped their red blood cell counts to levels approximating those in severely anemic newborn babies.

Seven days after birth, the researchers introduced bacteria that had been isolated and cultured from a premature infant with NEC. Finally, red blood cell transfusions were given on the 11th day after birth.
Over the next 48 hours, the researchers looked for development of NEC-like symptoms in their experimental group and three other sets of mouse pups: (1) a control group without any intervention, (2) a group without anemia that received transfusions and (3) a group with anemia but not transfused.

"Only the severely anemic pups who received blood transfusions showed intestinal damage that resembled human NEC with necrosis, inflammation and separation of the tissues supporting the lining of the colon," the senior author says. "The next step was to see if we could find a mechanism for why this occurred."

Examining the blood of the pups with NEC-like conditions after they were transfused, the researchers discovered that it contained three components not seen in the blood of the other test mice: (1) a large number of macrophages, the immune cells that engulf and digest cellular debris, bacteria and viruses, (2) freely circulating hemoglobin, the iron-based molecules that normally carry oxygen throughout the body when attached to red blood cells, and (3) elevated levels of inflammation-inducing proteins, indicating that the macrophages had been activated even without a biological threat to the intestine.

The researchers also observed that levels of haptoglobin, a protein that removes free hemoglobin from the blood, were extremely low.

"These findings suggest that anemia reduces the amount of haptoglobin in the neonate, preventing the free hemoglobin that comes in via transfusion from being properly removed as it normally would," the author says.

What apparently happens, is that free hemoglobin attaches to a protein receptor on the intestinal wall that is the same site where bacterial poisons bind. As a result, the immune system mistakenly believes the intestine is being attacked and activates the macrophages.

Once those immune cells go to work, they trigger release of the inflammatory proteins seen in the blood of the anemic, transfused mice. "That event starts a double whammy on the intestinal wall," the author says. "First, the macrophage proteins inflame and weaken the tissues, making them vulnerable, and then, bacteria move in and produce endotoxins that kill the individual cells."

With evidence for a probable mechanism to explain the connection between anemia and transfusion in the development of NEC, the researchers next sought to confirm it by seeing if they could block two of its stages, and perhaps, advance the search for potential therapies.

"In one trial, we gave haptoglobin to our model anemic mice before transfusing them and blocked macrophage activation, so they did not develop NEC-like symptoms," the author says.

In another test, nanoparticles were used to deliver a genetic interruption -- an RNA molecule known as a small interfering RNA, or siRNA -- that blocks the chemical signal telling macrophages to start producing inflammatory proteins. The nanoparticles were tagged with a fluorescent dye to track their movement and included a non-toxic compound derived from honeybee venom.

The macrophages in the blood of anemic mouse pups engulfed the nanoparticles and enclosed them within vacuoles. The bee venom derivative, broke open the vacuoles so that the siRNA could be released inside the macrophages.

"Because we showed that the inhibitory nanoparticles with siRNAs were able to control a master regulator of inflammation in NEC, perhaps this technology can one day be applied to not only treat or prevent NEC, but other diseases where inflammation plays a key role such as arthritis and atherosclerosis," the author says.