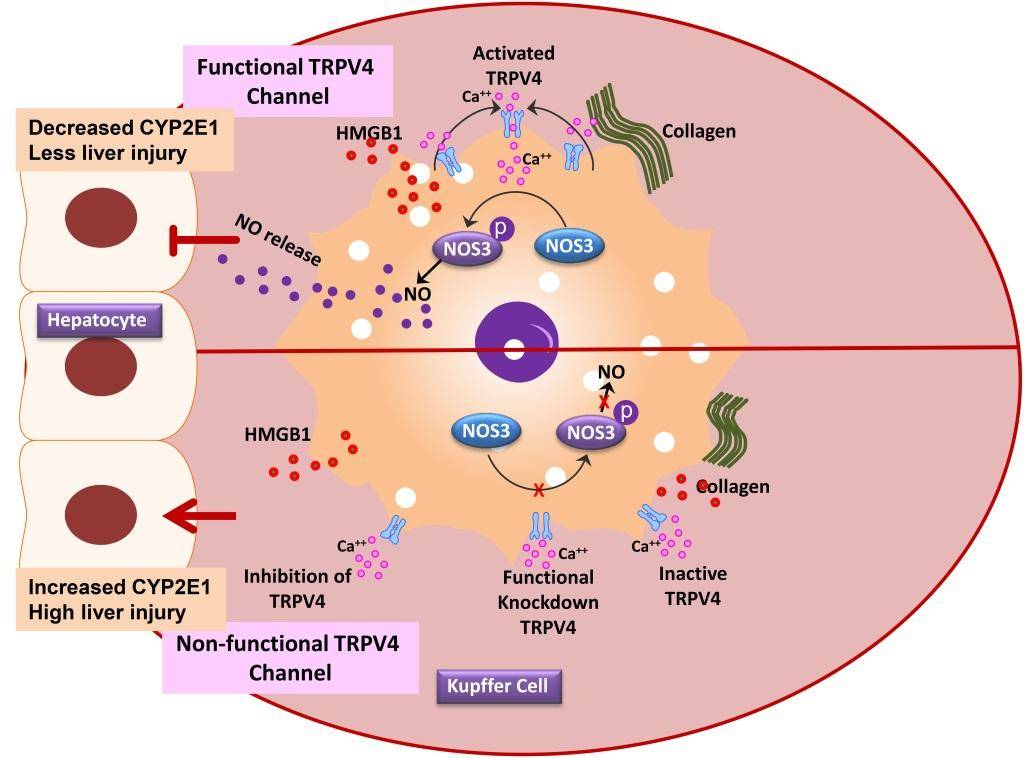 Researchers have discovered a new pathway in the liver that opens the door to treat non-alcoholic fatty liver disease, a condition that affects up to 25 percent of the population and may lead to cirrhosis and eventually liver cancer or failure, and likely other liver diseases and the study was published in Free Radical Biology & Medicine.

The team found that a protein (TRPV4), which is a part of the body's defense system, is able to activate the release of a gas (nitric oxide). This gas then blocks one of the enzymes (CYP2E1) that is a major contributor to non-alcoholic liver disease and its progression. TRPV4 is already known to protect against cardiovascular abnormalities.

Using Trpv4-/- mice and cultured primary cells, authors show that TRPV4 is activated both by damage associated molecular pattern HMGB1 and collagen in diseased Kupffer cells that in turn activate the endothelial NOS (NOS3) to release nitric oxide (NO).

The diffusible NO acts in a paracrine fashion in neighboring hepatocytes to deactivate the redox toxicity induced by CYP2E1. They also find that CYP2E1-mediated TRPV4 repression in late stages causes an unrestricted progression of disease.

Now that this protein's capacity to block the development of non-alcoholic fatty liver disease has been discovered, the next step is to harness its preventive and treatment abilities. According to the authors, a new generation of TRPV4 agonists can now be tested to improve outcomes related to non-alcoholic fatty liver disease. The agonist is a chemical that will bind to this protein and activate the release of nitric oxide to block the harmful enzyme. Once the appropriate agonist is identified, it can be incorporated into medication for clinical treatment.

In addition to revealing the benefits of activating TRPV4, the researchers also warn against the consequences of inhibiting the TRPV4 ion channel, an approach that can enhance hepatotoxicity (i.e., liver damage caused by chemicals), which can result from acetaminophen or alcohol over-consumption.

Non-alcoholic fatty liver disease occurs when there is a buildup of extra fat in the liver (i.e., more that 5-10 percent of the liver's total weight) coupled with liver inflammation that is not caused by alcohol.