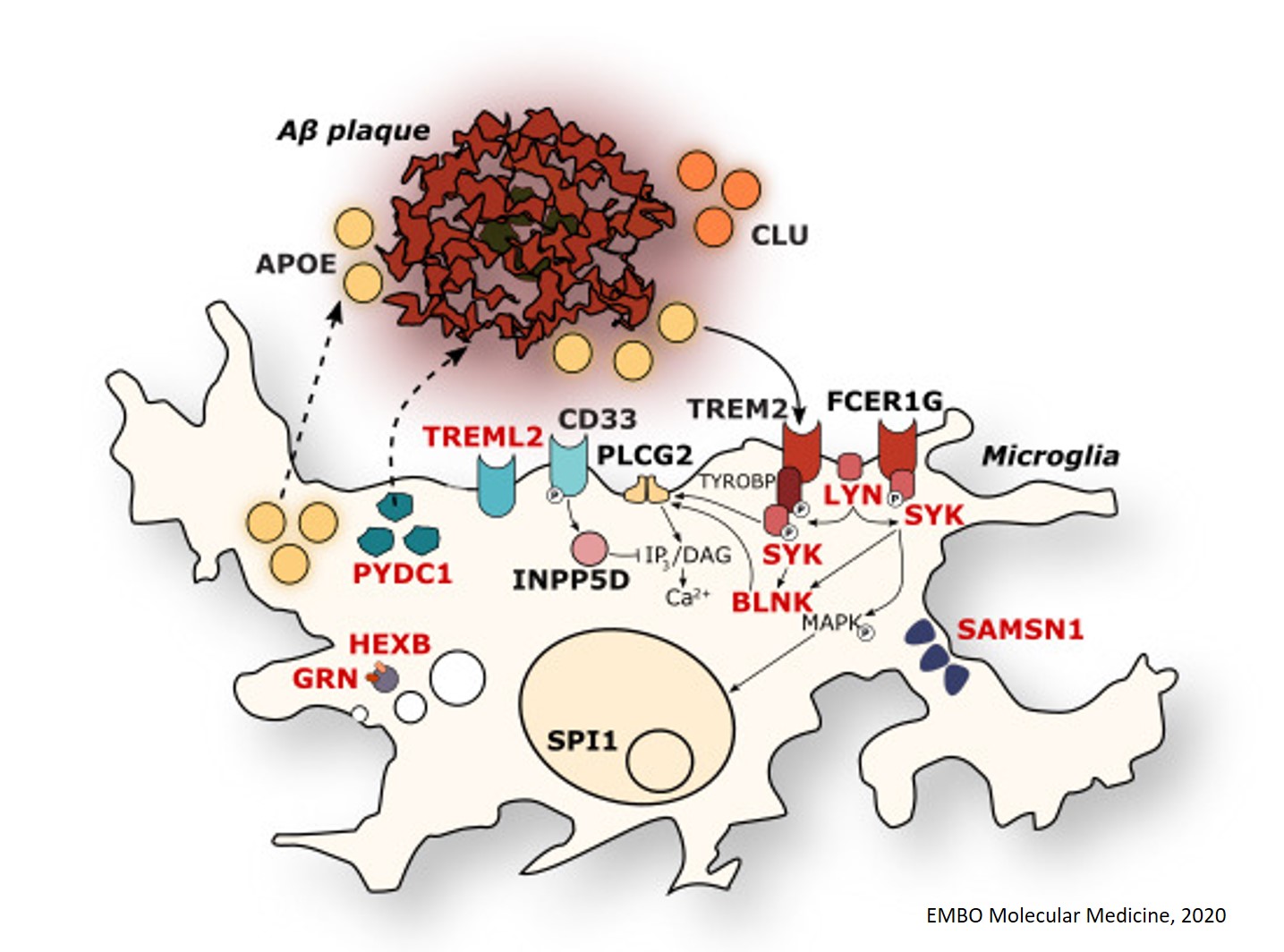 Our DNA determines a large part of our risk for Alzheimer's disease, but it remained unclear how many genetic risk factors contribute to disease. A team of researchers now show that many of risk factors affect brain maintenance cells called microglia, and more particularly their response to amyloid-beta, one of the proteins aggregating in the brains of Alzheimer patients. The individual effects of small genetic variations are likely small, but the combination of hundreds of such subtle alterations might tip the balance and cause disease.

Why do some people get Alzheimer's disease while others do not, even when growing very old? Despite decades of research, we still don't know the full answer to this question. Epidemiological studies show that about two-thirds of a person's risk for Alzheimer's disease is genetically determined. A few dozen risk genes have been identified, however, recent evidence shows that there could be hundreds of additional genetic variants that each contribute in a small but significant way to disease risk.

The team tries to find out what this combined genetic risk can teach us about how the disease develops in our brain: "Two crucial questions arise from the myriad of genetic studies. First, what is the link between these Alzheimer risk genes and the amyloid-beta plaques or tau tangles we find in Alzheimer brains; and second, are they all involved in one central cellular or molecular pathway, or do they define many parallel pathways that all lead to Alzheimer's?"

The researchers set out to understand when these genes are expressed and in particular, whether they respond to tau or amyloid?beta pathology. "When it comes to risk, you always need to take the context into account," explains co-lead author of the study. "If you don't wear your seatbelt in the car, there is no problem as long as you don't have an accident."

With this in mind, the researchers aimed to understand under which circumstances genetic risk for Alzheimer's comes into play. The author said: "Almost every person develops some degree of Alzheimer pathology in the brain, i.e. amyloid-beta plaques and tau tangles. However, some people remain cognitively healthy despite a high pathology load, while others develop Alzheimer symptoms quite rapidly."

"To gain more insight we checked gene expression in two different mouse models of Alzheimer's, one displaying amyloid-beta and the other tau pathology, at different ages," says the lead author. "We identified that many of the genes linked to Alzheimer's risk are particularly responsive to amyloid-beta but not to tau pathology."

The team identified 11 new risk genes that are significantly upregulated when facing increased amyloid-beta levels. All these genes are expressed in microglia, cells that play a key role in brain maintenance.

A PhD student closely involved in the analysis: "We could confirm that microglia exposed to amyloid-beta drastically switch to an activated status, something that occurs to a much lesser extent in the tau mice. These new insights indicate that a large part of the genetic risk of Alzheimer's disease involves the microglial response to amyloid-beta."

Should we rethink the classical gene based view, where certain mutations or genetic variants lead to disease? The senior author thinks so: "One single genetic variant within a functional network will not lead to disease. However, multiple variants within the same network may tip the balance to a disease causing disturbance. Such a hypothesis could also explain the conundrum that some /individuals with a lot of amyloid-beta in their brain do not develop clinical symptoms."

"While amyloid-beta might be the trigger of the disease, it is the genetic makeup of the microglia, and possibly other cell types, which determines whether a pathological response is induced," adds the co-author. "Identifying which genetic variants are crucial to such network disturbances and how they lead to altered gene expression will be the next big challenge."