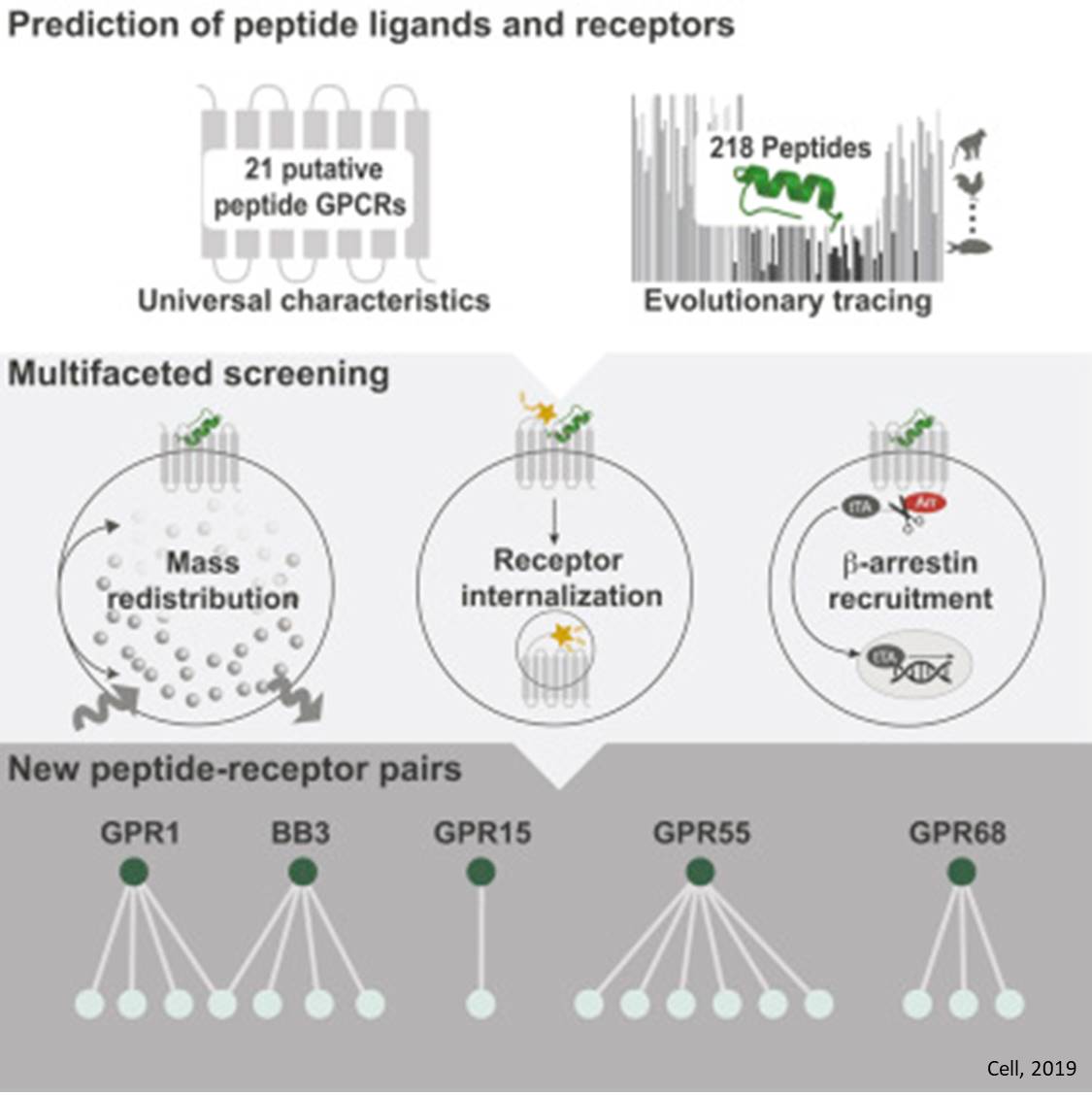 The human cell has a wide variety of receptors on its surface that many molecules and therapeutic drugs can bind to in order to activate signals inside the cell to regulate different physiological functions. GPCRs are the largest - and a very important - family of receptors on human cells.

One third of all approved drugs target GPCRs in one way or the other. However, for about one third of GPCRs the scientific community does not know which molecules - or ligands as they are called - bind to the receptor and activate a signal.

Now researchers have discovered new signaling systems: five GPCRs activated by 17 peptide ligands. The new study, which is published in Cell, therefore expands the known peptide-GPCR network from 348 to 415 interactions or by 19 percent in total.

Researchers can spend their whole career studying one GPCR signaling system because their therapeutic potential is vast, as shown by the sheer number of medical drugs targeting them. In this study, we have identified five new such systems. In other words, this doesn't happen every day and it might have huge implications for drug development," says lead author.

The researchers wanted to find peptides that function as signaling molecules because they represent around 71 percent of all known ligands that bind to GPCRs and they are increasingly tested in clinical trials. In short, peptides were a good place to start in the search for new signaling molecules.

Potential peptide ligands were identified from all the proteins in a cell, the so-called proteome, consisting of around 20,000 proteins. The researchers focused on those that are secreted from the cell, as peptides that work as signaling molecules need to be secreted. They then filtered out all those with a previously known function.

In the research project, they then used machine learning to predict what potential peptides could be ligands for GPCRs. The calculations took into account genomes from more than 300 species and attempted to answer to what extent the peptides were "evolutionary conserved" or had the same characteristics as peptides in the species.

"In combining computational drug design with pharmacology, machine learning and genomics we have used a truly collaborative method in order to identify these new aspects of human biology. We would not have been able to identify this many pairs had it not been for the interdisciplinary nature of our method," says the senior author.

The researchers selected 218 potential ligands which they screened against 21 receptors with three different cutting-edge techniques to capture the different receptor responses: physical mass distribution inside the cell, internalization of the receptor in the cell and the recruitment of a protein called beta-arrestin. The researchers used three techniques because using only one might miss some signals that use other pathways.

This comprehensive experimental process took over 3 years of lab work and in the end, the researchers identified the five GPCRs paired with 27 peptide ligands. The gene of origin of the identified peptide ligands have previously been implicated in many diseases including genetic, nervous system and neoplastic disorders.