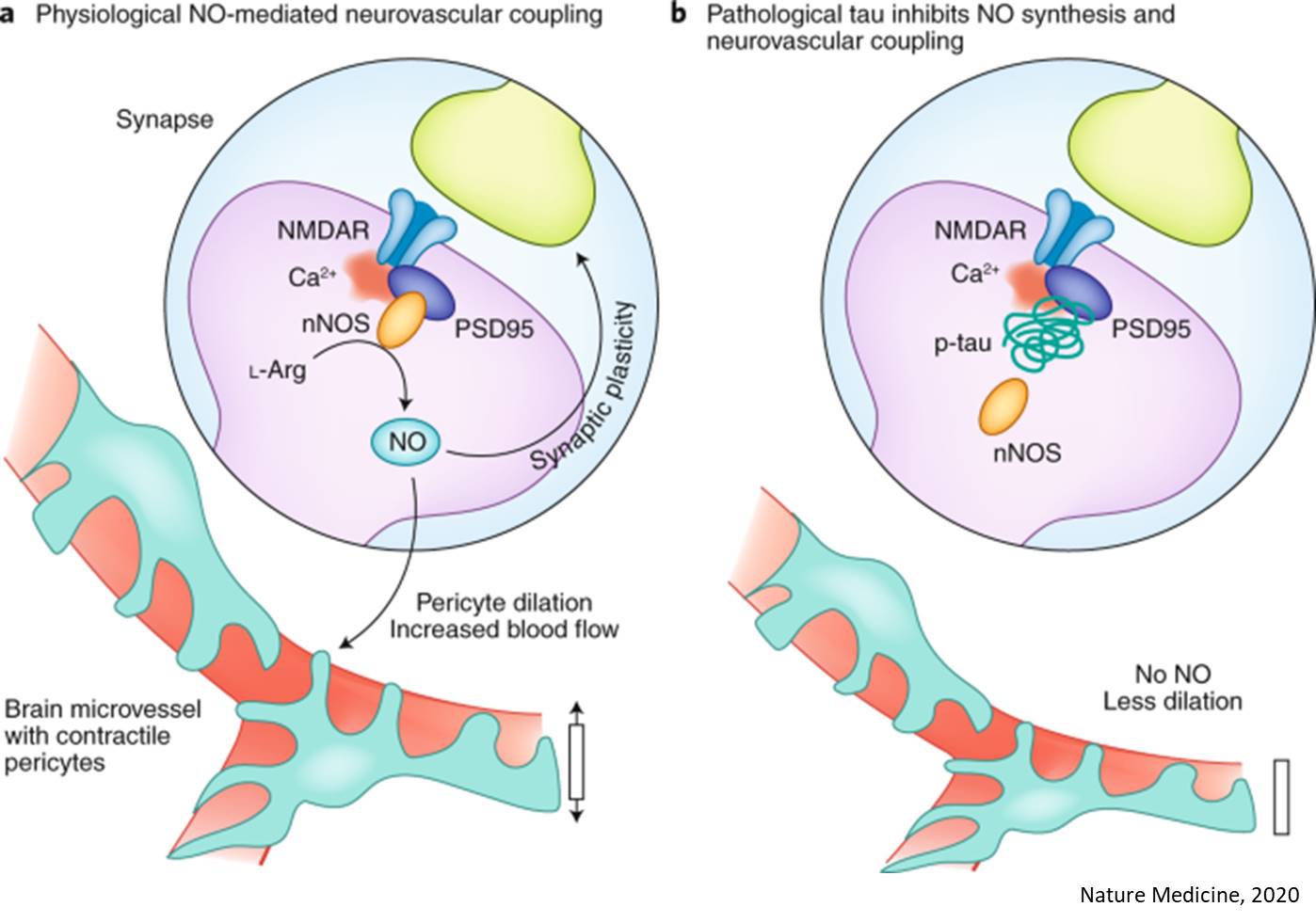 Abnormal forms of a brain-cell protein called tau, which have long been implicated in Alzheimer’s and other neurodegenerative disorders, may contribute to neurodegeneration earlier than was previously understood, by interfering with the normal dynamics of blood flow in the brain, suggests a study.

Published in Nature Neuroscience, the study revealed that in mice carrying mutant versions of tau, the protein disrupts the normal ability of brain cells to induce more blood flow from cerebral vessels when the cells are more active.

This defect in normal cerebral blood-flow dynamics was evident even in young tau-mutant mice, long before they showed signs of neurodegeneration.

Although scientists have known for many decades that abnormal aggregates of tau protein form within affected brain regions in some neurodegenerative disorders, they have never fully understood how tau drives these disorders. The new finding raises the possibility that tau does so, at least in part, by preventing active neurons from getting the level of oxygen and nutrients they need.

Roughly six million people in the United States have Alzheimer’s disease, and hundreds of thousands of others have less well known tau-related neurodegenerative disorders such as frontotemporal dementia and progressive supranuclear palsy. These disorders are all considered “tauopathies” because they feature the accumulation in affected brain regions of large aggregates of tau proteins, often called tau tangles. To date, however, no one has conclusively shown how tau drives neurodegeneration, and in clinical trials no anti-tau therapy has ever helped patients who have tauopathies.

In the new study, the authors examined mice that had been genetically engineered to have mutant, tauopathy-linked forms of tau. Such mice, which develop tau tangles and neurodegeneration, are commonly used as animal models for studying Alzheimer’s and other tauopathies.

The researchers found that even at just two to three months old, a basic process in the tau-mutant mice that ensures proper blood flow to energy-hungry neurons in the cortex was markedly reduced—long before the development of tau tangles or neurodegeneration. The process, called neurovascular coupling, normally causes local blood vessels supplying neurons to dilate and increase their blood flow in response to increases in the neurons’ activities.

The scientists found evidence in the mice that among neurons using the neurotransmitter glutamate for signaling, tau proteins bind to a large protein complex linked to the glutamate receptor. This binding of tau interrupts the normal connection between glutamate signaling activity and the production of nitric oxide, a molecule that causes vessels to dilate.

Shutting off the production of tau restored normal neurovascular coupling. The researchers observed this restorative effect even in older mice whose neurons were riddled with tau tangles. Thus, the disruption of neurovascular coupling appeared to be caused by a form of tau other than tangles.

The results suggest that in Alzheimer’s and other tauopathies, mutations in tau or other events that displace tau from its usual locations in neurons may allow some non-tangle form of the protein to disrupt normal neurovascular coupling.

Though it remains to be proven, it’s conceivable that this subtle disruption of normal cerebral blood-flow dynamics may contribute to the degeneration of neurons that is observed in tauopathies.

The authors now plan experiments to see if restoring neurovascular coupling can prevent neurodegeneration. They are also studying the molecular details of how tau interrupts nitric oxide production..