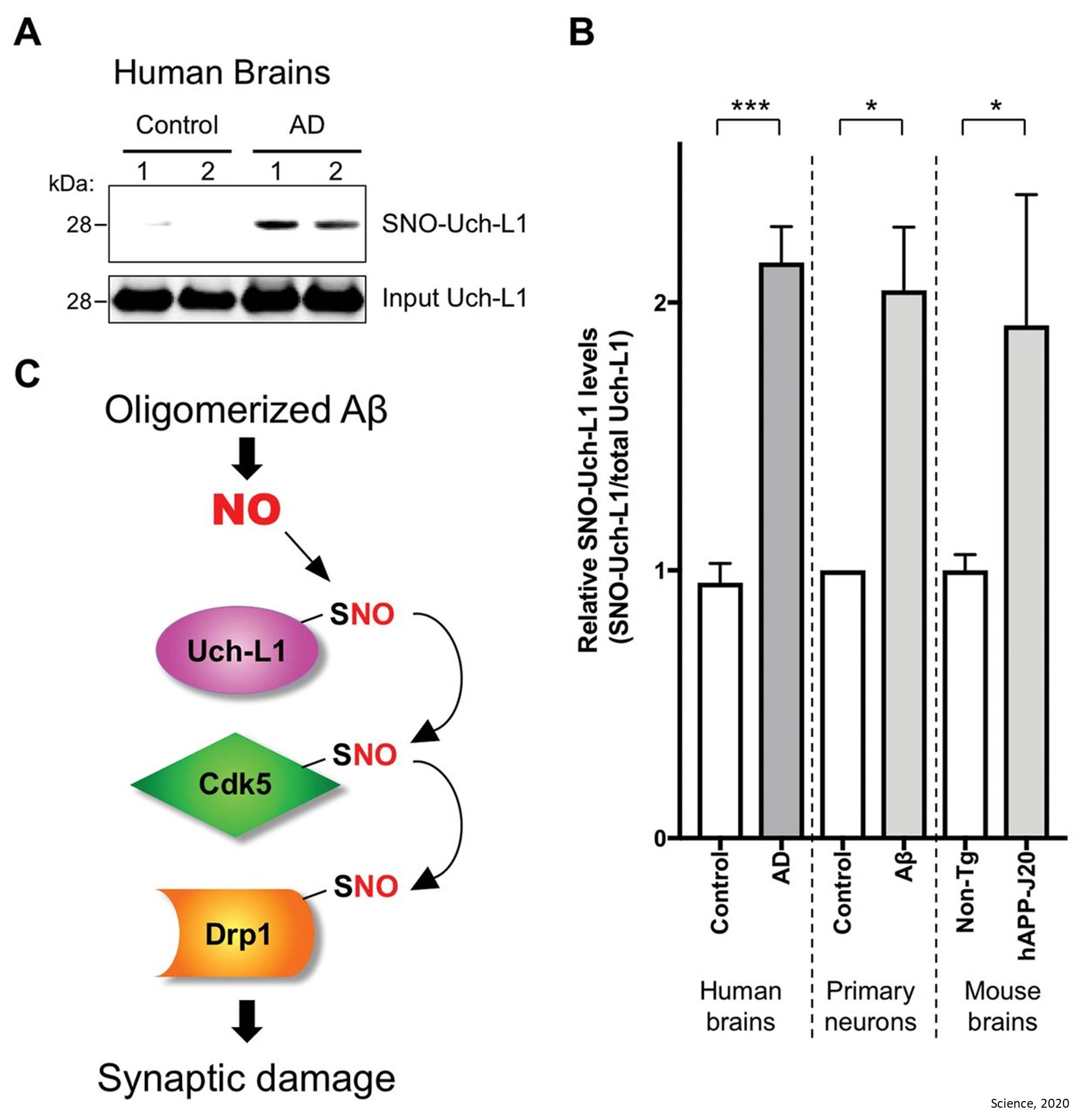 A new study on Alzheimer's disease has revealed a previously unknown biochemical cascade in the brain that leads to the destruction of synapses, the connections between nerve cells that are responsible for memory and cognition.

The findings present a fresh angle for discovering drugs that treat Alzheimer's disease, which affects roughly 50 million people worldwide. The study appears in the journal Science.

"This work gives us new hope for better therapeutic targets, as the reactions we discovered are downstream of amyloid action," the senior author says. "We've opened up a whole new avenue for drug development."

In the new study, the team used physical chemistry techniques to quantify how electrons participate in chemical reactions, as they suspected unknown processes may be taking place in the brain. Through this, they uncovered the entirely new series of biochemical events in nerve cells affected by Alzheimer's.

They found that small clumps of beta amyloid protein trigger excessive neuron activity and inflammation, leading to the destructive series of transnitrosylation reactions.

The process begins with excessive levels of nitrogen (N) and oxygen (O) atoms joining together as an "NO group," which is then transferred to a protein building block called cysteine to regulate the activity of the protein. A series of these aberrant protein reactions cuts off energy to the brain's nerve cells by disrupting their mitochondria--organelles that generate power for the cell's biochemical reactions. This eventually leads to loss of synapses connecting the nerve cells.

"We were able to show that these reactions occur in brains of Alzheimer's patients, and when we prevented these reactions in the brains of animal models of the disease, we protected the synapses," the author says. "Our findings suggest that it may be possible to intercede to reverse synapse damage in spite of plaques and tangles," the author added, referring to "plaques" of beta amyloid and "tangles" of misfolded tau protein, both of which are characteristic of Alzheimer's disease.

The author notes that while normal levels of NO foster memory and learning, excessive levels can build up as we age and become harmful to synapses.

"With this new knowledge, we may be able to restore synaptic connections in Alzheimer's patients after extensive plaques and tangles have formed in their brains," adds the first author of the study.

The team's most incredible findings was that the three enzymes discovered to pass NO to each other along a concerted chain of events, resulting in energy failure, were previously not thought to be even remotely related to one another. Each of the enzymes is important in its own right in a completely disparate normal biochemical pathway, and yet they interact under disease conditions in a novel manner to trigger intense neuronal stress and synapse damage.

"This type of hidden or 'ghost' pathway may only become evident under disease conditions and may represent an important fundamental tenet of why we did not understand the disease process previously," the senior author says. "If we do not know about a pathway, scientists cannot study its contribution to disease or develop drugs to treat it."

While many molecular biochemical pathways have been discovered, an over-reliance on this existing body of evidence can actually impede discovery of disease processes, the author adds.

"Hence, the most important aspect of the work is that we have to be on our guard to look for new pathways and new relationships of existing enzymes in order to understand and treat neurodegenerative disorders such as Alzheimer's," the senior author says.