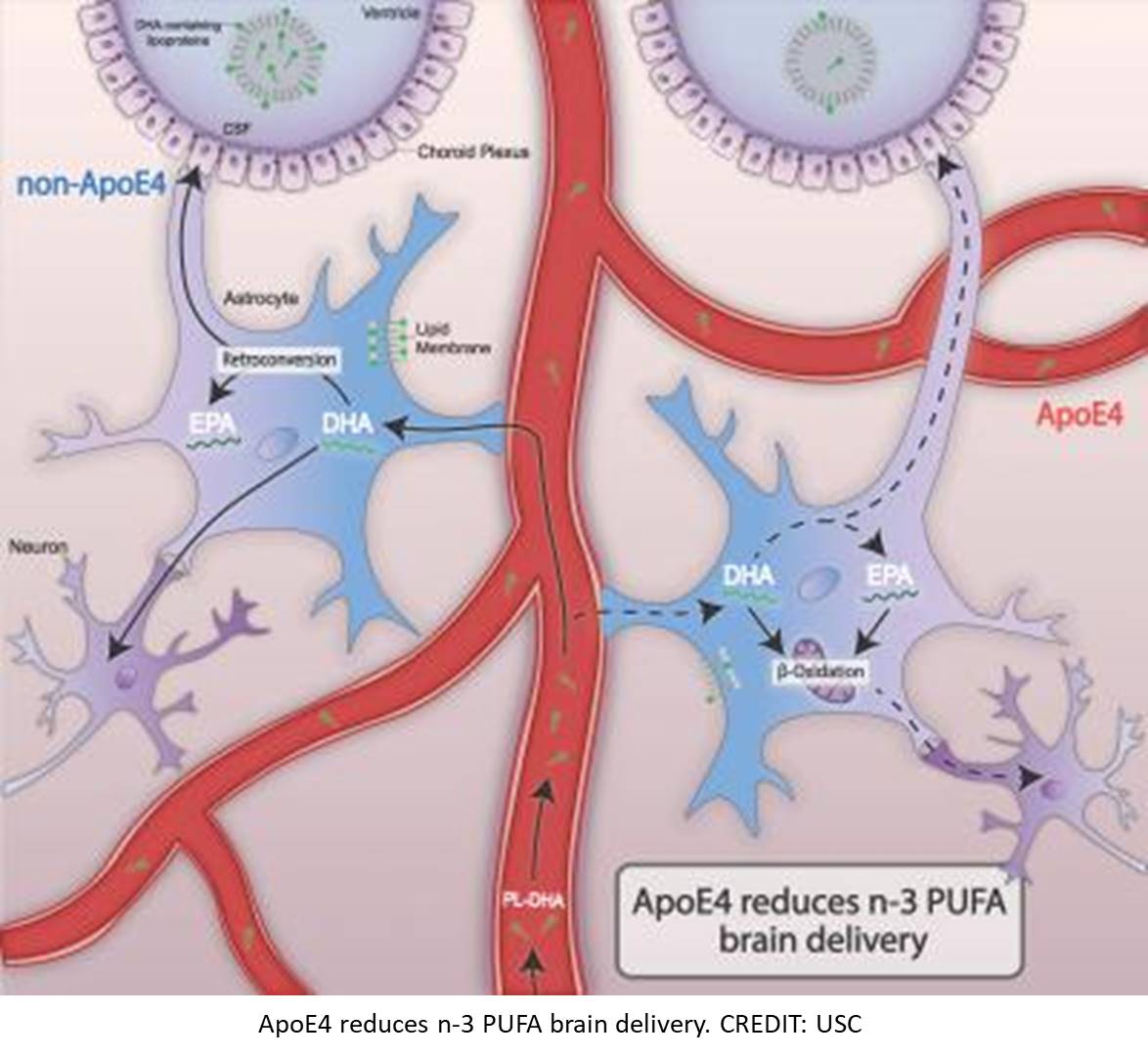 For years, a scientific puzzle has bedeviled researchers aiming to fight Alzheimer's disease, a common and incurable form of dementia.

The results of numerous lab investigations and population studies support the preventive potential of omega-3 fatty acids, "good fats" found abundantly in fish. However, to date the majority of studies evaluating omega-3s for averting or curtailing cognitive decline in human participants have failed to show benefits.

Now, a small clinical trial from provides important clues about this discrepancy, in the first Alzheimer's prevention study to compare levels of omega-3s in the blood with those in the central nervous system. The findings suggest that higher doses of omega-3 supplements may be needed in order to make a difference, because dramatic increases in blood levels of omega-3s are accompanied by far smaller increases within the brain. Among participants who carry a specific mutation that heightens risk for Alzheimer's, taking the supplements raised levels of a key fatty acid far less compared to those without the mutation.

"Trials have been built on the assumption that omega-3s get into the brain," said senior author. "Our study was specifically designed to address this question." The paper was published in the journal EBioMedicine.

The researchers recruited 33 participants who had risk factors for Alzheimer's but were not cognitively impaired. All participants had a family history of the disease, a sedentary lifestyle and a diet low in fatty fish. Fifteen carried a gene variant called APOE4, which is linked to inflammation in the brain and increases Alzheimer's risk by a factor of four or more; the other 18 were noncarriers.

At random, participants were assigned to a treatment group or control group. Members of the treatment group were asked to take supplements containing more than 2 grams of an omega-3 called docosahexaenoic acid (DHA) daily for six months. Control group members took placebos each day over the same period. Participants in both groups also were asked to take daily B-complex vitamins, which help the body process omega-3s.

The authors gathered samples of blood plasma and cerebrospinal fluid -- a gauge for whether the omega-3s reached the brain -- from participants at the outset, and again at the end of the study period. The scientists looked at levels of two omega-3 fatty acids: DHA and eicosapentaenoic acid (EPA), a potent anti-inflammatory that the body derives from a small portion of its DHA intake.

The researchers found that at the end of the six months, participants who took omega-3 supplements had 200 percent more DHA in their blood compared to those who took placebos. In contrast, the DHA found in cerebrospinal fluid was only 28 percent higher in the treatment group than the control group. This result hints that measuring omega-3 levels in the blood may not indicate how much is reaching the brain.

The authors also report that, within the treatment group, those without the risk-inflating APOE4 mutation showed an increase of EPA (anti-inflammatory omega-3 fatty acid) in their cerebrospinal fluid three times greater than what was seen in carriers of the gene.

"E4 carriers, despite having the same dose, had less omega-3s in the brain," the senior author said. "This finding suggests that EPA is either getting consumed, getting lost or not getting absorbed into the brain as efficiently with the E4 gene."

Notably, the 2-gram dose of DHA in this study far exceeded what has been used in major clinical trials testing the preventive power of omega-3s, which typically administer 1 gram or less daily.

"If you use a lower dose, you can expect a less-than-10-percent increase in omega-3s in the brain, which may not be considered meaningful," the author said.

The investigators worked for two years to recruit participants for the trial. The barrier to entry came from the only method capable of extracting cerebrospinal fluid: a lumbar puncture, also known as a spinal tap. It proved challenging to find people willing to undergo that procedure, which involves a hollow needle piercing the lower back, two times.

The authors had high praise for the study participants."They were generous with their time, and they were courageous to do the lumbar punctures," the author said. "The main reason they did this was their desire to advance science." The participants' bravery may pay off in the creation of even more knowledge about omega-3s and Alzheimer's.

The preliminary data from the current study was intriguing enough that the scientists were able to attract funding for a larger trial for which recruitment is underway. Following 320 participants over two years, it will examine whether high doses of omega-3s can slow cognitive decline in carriers of the APOE4 gene.

The author believes that the progression from a small study to a bigger one is a good model for developing therapies and preventions targeting the brain. "These pilot studies are so important as a step toward much larger, more complicated studies," the author said. "The bottom line is, before you embark upon very expensive clinical trials, you need to show proof of concept, that your drug is getting into the brain and changing biomarkers of disease in the right direction."