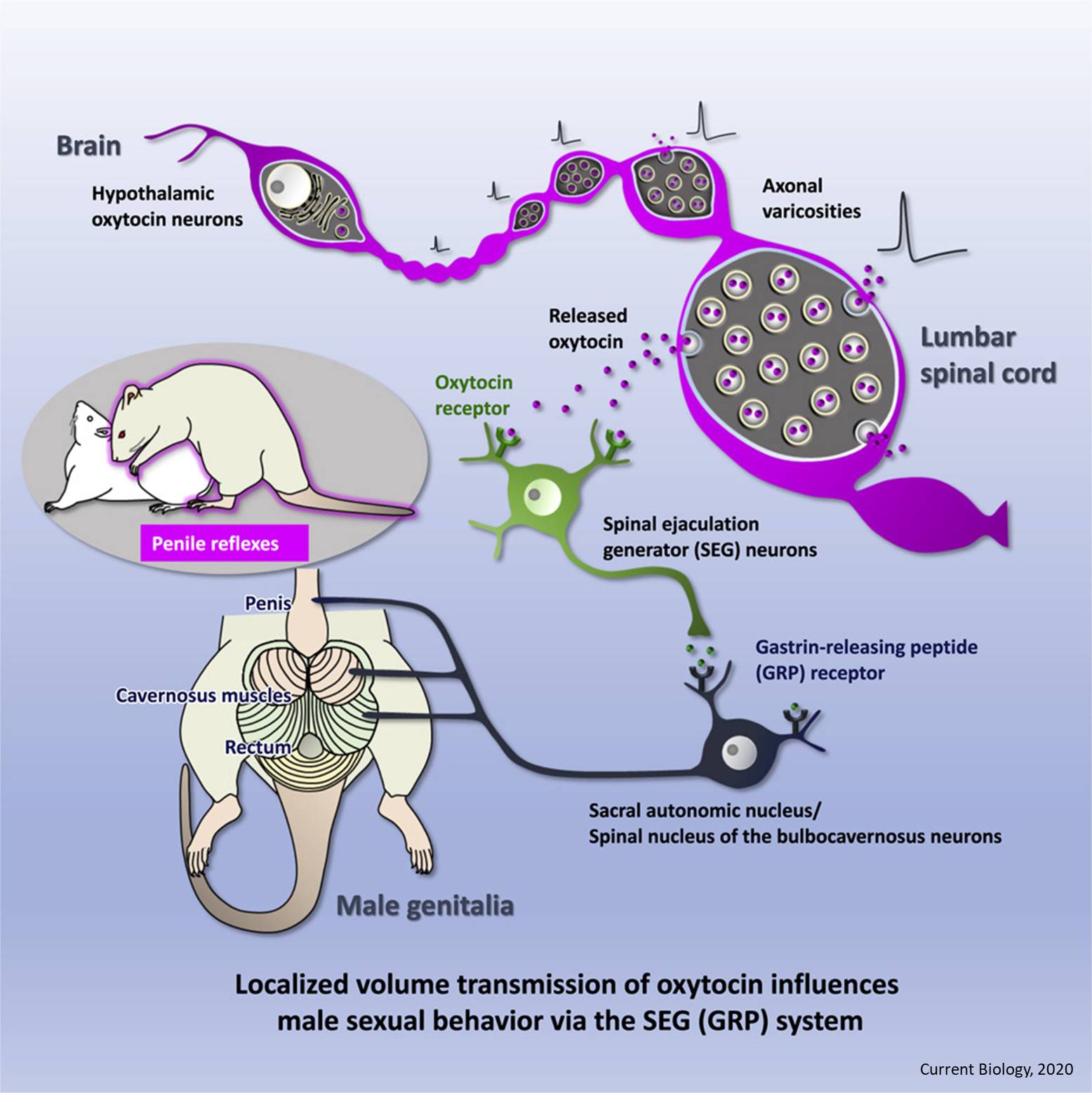 Hormones are key players of the endocrine system and have a major influence on our emotional and sexual wellbeing. The hormone oxytocin is involved in a wide range of emotions from social bonding to maternal behaviors like nursing and lactation. But the most popular and well-known role of oxytocin, lending it its popular moniker of 'love hormone,' is its role in romantic and sexual emotions.

The functional mechanism of oxytocin in male sexual function and behavior is not clearly understood, but there is some evidence supporting the role of oxytocin-specific nerve cells or neurons in the brain that project to the lower spinal cord and control penile erection and ejaculation in male rats. Now, in a brand new study published in Current Biology, a group of researchers has explored this potential role of oxytocin and the underlying mechanisms in modulating male sexual function using rats as a model system.

Oxytocin is transferred from the brain to various parts of the body by the blood, and from neuron to neuron through structures called "synapses." However, the precise mechanisms by which sparsely dispersed oxytocin fibers--structures responsible for responding to oxytocin in the central nervous system--cause the activation of widely distributed receptors remain unclear.

The researchers investigated a novel non-synaptic mode of oxytocin transport across the central nervous system. When asked to explain this process, the senior author refers to an interesting analogy: "Overall, the endocrine system, which acts on widespread distant organs via the circulation, resembles a 'broadcasting satellite' communication, whereas synaptic transmission resembles the hard-wired 'ethernet.' Accordingly, the localized volume transmission of peptides resembles 'Wi-Fi' communication, since it is a hybrid of both endocrine (satellite) and synaptic (ethernet) systems, and may be the predominant mechanism of oxytocinergic modulation of socio-sexual behavior and cognition throughout the central nervous system."

It is already known that spinal regions like the spinal ejaculation generator (SEG) are known to control sexual functions in male rodents. To assess the role of oxytocin in copulatory and ejaculatory responses, the team injected oxytocin into the spine of male rats. The gastrin-releasing peptide or GRP neurons are an important component of the SEG, as they control the lower lumbar region connected to muscles at the base of the penis, thereby controlling erection and ejaculation.

The question remained about the transport of oxytocin, however. Electron microscopy images acquired from slices of the lumbar region ruled out the presence of synaptic vesicles or connections. Upon stimulation of exocytosis ex-vivo, they were able to observe oxytocin transport mediated by a more passive diffusion in extracellular spaces at non-synaptic sites.

Highlighting the importance of the study, the author remarks, "Now that we have uncovered a novel neural mechanism-the 'localized volume transmission' of oxytocin from axons-involved in controlling male sexual function in the spinal cord, we can hope that this may lead to the development of treatments for male sexual dysfunction."

This study thus presents a completely unprecedented role for oxytocin in male sexual function, in addition to its long-standing "female-centric" role. Learning more about this "love hormone" may indeed help us foster healthier and long-lasting loving relationships!