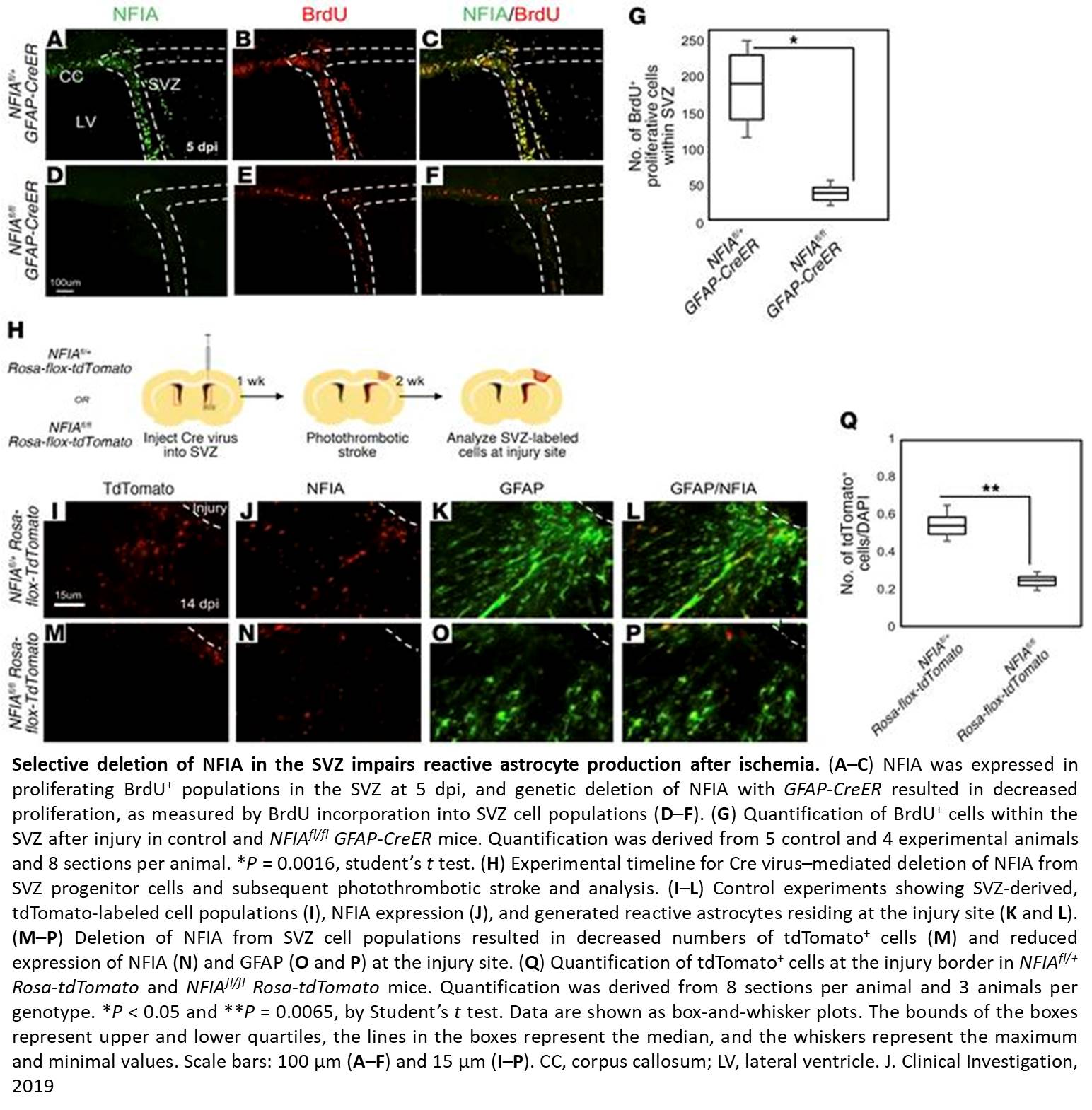 Astrocytes are the most abundant cells in the brain, yet there is still much to learn about them. For instance, it is known that when the brain is injured or diseased astrocytes are the first responders. They become reactive and play roles that can be both beneficial and deleterious, but little is known about how these diverse responses to injury are regulated. Working with mouse models, a multi-institutional group of researchers has identified nuclear factor I-A (NFIA) as a central regulator of both the generation and activity of reactive astrocytes.

Unexpectedly, NFIA's role seems to depend on the type of injury and on the region of the central nervous system where the injury occurs. The report also begins to define the molecular mechanisms involved, and shows that NFIA also is abundant in reactive astrocytes found in human pediatric and adult neurological injuries, suggesting that NFIA may play similar roles in people. The study appears in The Journal of Clinical Investigation.

Looking to better understand the roles these important cells play in neurological disorders, the authors  looked into NFIA, a known regulator of astrocyte development, to determine its role in the generation and regulation of reactive astrocytes.

"The results were surprising," said the senior author . "Until now, it was thought that regardless of the type of injury or where it occurred in the central nervous system, reactive astrocytes would respond in the same way. Knocking out NFIA allowed us to uncover a previously unknown layer of functional diversity in reactive astrocytes."

But when the researchers tested the response to a different form of injury in another region of the central nervous system, a stroke in the cerebral cortex, they observed something much different. While normal mice (with NFIA) responded to stroke by producing reactive astrocytes that migrated toward the injury to repair the bleeding, NFIA-deficient mice did not generate reactive astrocytes and the injury was not healed. In both cases, in the spinal cord and in the cerebral cortex, the injury was not properly repaired, but the underlying reasons for this were drastically different.

"These findings suggest that NFIA's function in reactive astrocytes is dependent upon the type of injury and brain region in which the injury occurs. In the cerebral cortex, NFIA is crucial for making reactive astrocytes, while in the spinal cord NFIA is important for sealing off leaking blood vessels. These results hint at an extensive reservoir of reactive astrocyte responses that vary based on form and location of injury," the author said.

In addition, the researchers began to define the molecular mechanisms underpinning the generation of reactive astrocytes. They found a direct connection between NFIA and thrombospondin 4. NFIA directly regulates the production of thrombospondin 4, a factor that had been previously identified in the lab of co-author  as an essential regulator of the generation of reactive astrocytes.

"Although our study was conducted in mice and much more research is needed, we think our findings may reflect what occurs in people, as NFIA also is abundantly present in reactive astrocytes in both pediatric and adult neurological injuries," the author said. "We also are interested in investigating the role of NFIA in reactive astrocytes in neurodegenerative diseases such as Alzheimer's and Parkinson's disease, as it's entirely possible it has a completely different set of functions in these diseases."