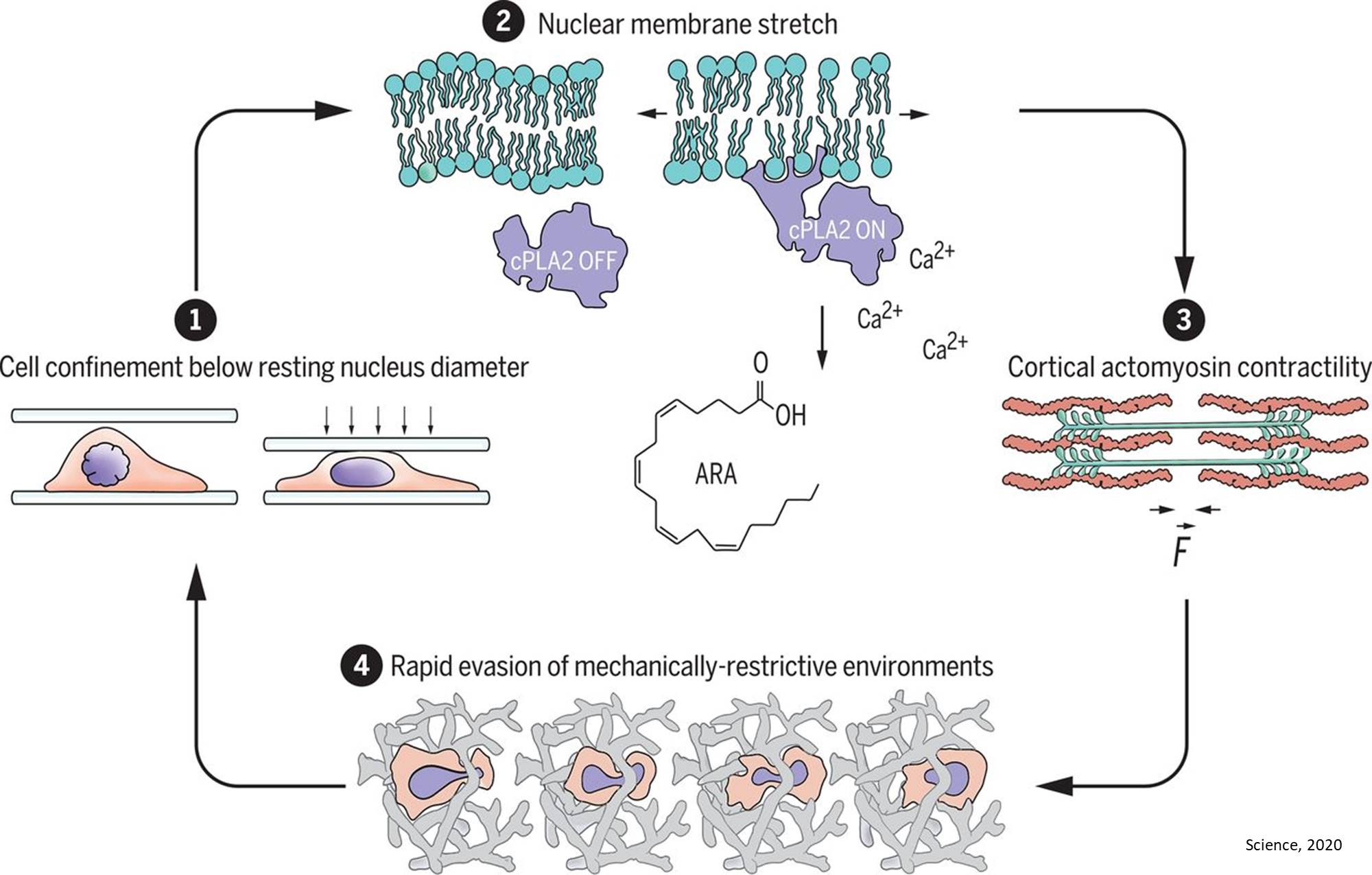 Like people, cells in the human body protect their personal space. They seem to know how much space they need, and if it gets too tight, most cells prefer to break free. The mechanism enabling cells to evade crowded environments appears to involve an unusual player - the cell nucleus. This is what researchers showed in their recent wook in the journal Science.

The human body consists of trillions of cells growing in confined volumes, which often leads to cell crowding. The crowding effect is exacerbated when cell growth and proliferation are out of control during tumor formation. This creates a compressive microenvironment for the constituent cells. How do tumor cells cope with the lack of space and compressive stresses? Answering this question, the investigators found that the cells are able to sense environmental compression.

To do so, they utilize their largest and stiffest internal compartment, the nucleus. Squeezing cells to the degree that physically deforms the nucleus causes the nuclear membranes to unfold and stretch. These changes are detected by specialized proteins, activating cellular contractility. The ability to develop contractile forces helps squeezing the cell out of its compressive microenvironment in an "evasion reflex" mechanism. Therefore, the study proposes that the nucleus operates as a ruler (see the accompanying illustration). It allows living cells to measure their personal space and trigger specific responses once the space becomes violated.

As the scientists describe in the paper, Ca2+-dependent phospholipase cPLA2 is a protein, which senses nuclear membrane stretch upon cell compression. The lead author emphasizes that cPLA2 represents a druggable target. "Pharmaceutical companies are currently testing small molecule inhibitors of cPLA2. Based on our data, downregulating the activity of cPLA2 in tumor cells might interfere with their ability to escape the primary tumor and metastasize to distant locations", explains the author.

cPLA2-inhibitors prevent the production of arachidonic acid (ARA), which subsequently affects cell migration, growth, and survival. However, ARA can also be obtained by cells from their environment. The Western diet, for instance, is a potent source of omega-6 fatty acids, such as ARA. Dietary fat restriction and consumption of omega-3 instead of omega-6 fatty acids could synergize with cPLA2 inhibitors to effectively attenuate tumor cell escape from overcrowded areas. "Testing these hypotheses is an exciting direction for future research", concludes the author.

Identifying the cell nucleus as an active player that rapidly converts mechanical inputs into signaling or metabolic outputs is surprising. Until today, the nucleus was considered as a passive storehouse for genetic material. "We are very excited about what comes next", says the author. According to the author, high degrees of nuclear deformation could be predictive of metastatic potential and resistance to chemotherapy and immunotherapy.

"For many years, pathologists have been evaluating changes in the shape of the nucleus to discriminate between different stages of tumor growth; however, how these structural-mechanical alterations of the nucleus functionally impact cancer cells remained completely unexplored", says the author.