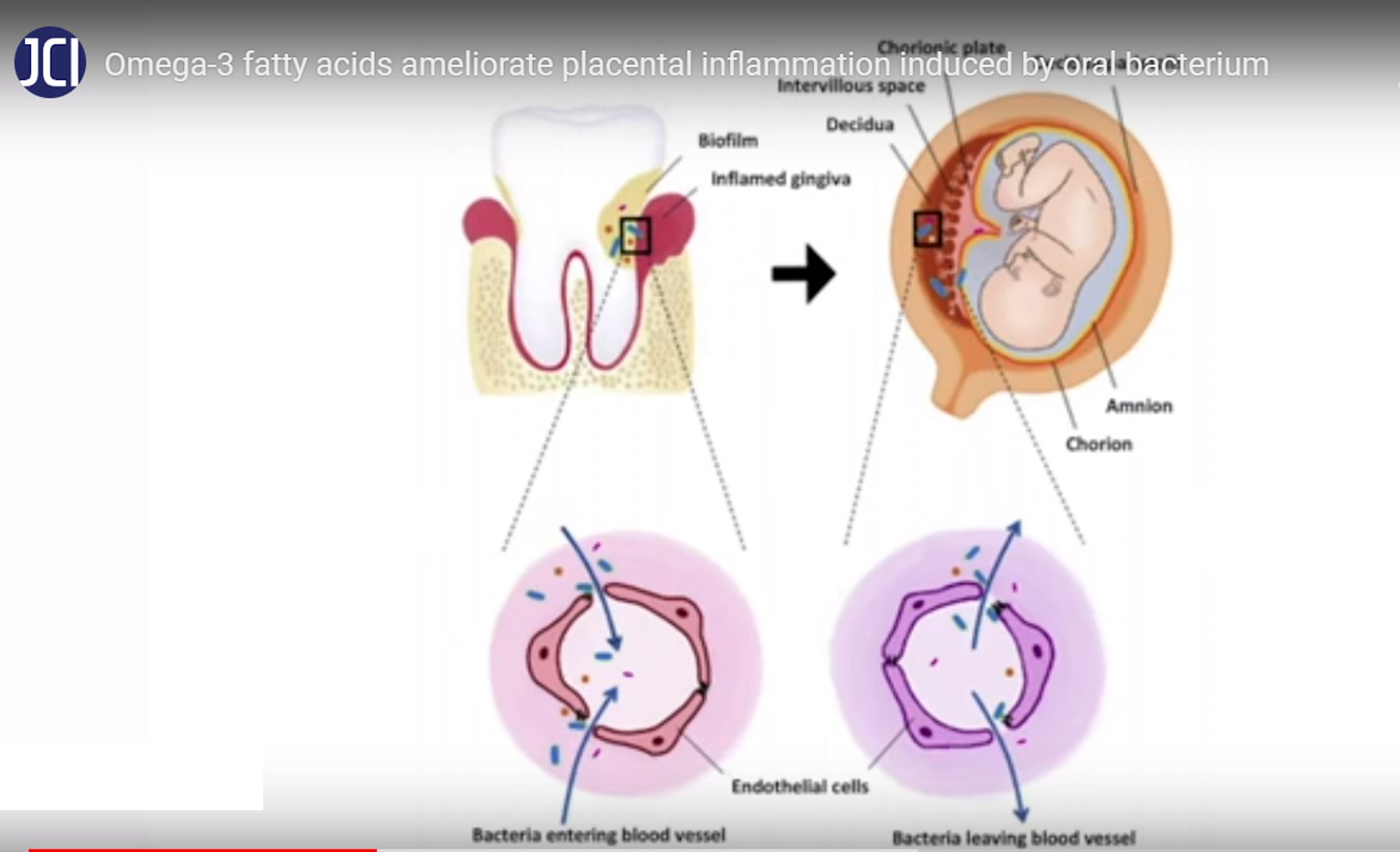 Compounds found in fish oil prevent pregnancy complications, including preterm birth, neonatal death, and stillbirth, in mice when the complications are caused by a common oral bacteria, according to research published in the journal JCI Insight.

Approximately one in 10 U.S. infants are born before term. Between 10 and 30 percent of preterm births have been attributed to uterine infections with a type of bacteria commonly found in the mouth, F. nucleatum.

This research identifies a potential prophylactic treatment for pregnant women to lower the risk of adverse outcomes including stillbirth.

"This type of bacteria is ubiquitous; everybody has it in their mouths," says the senior author of the new study. "The problems start when it travels to other parts of the body."

In pregnant women, the placenta is at particular risk for infection with F. nucleatum. Hormonal changes during pregnancy can cause inflammation and bleeding in the gums, which affects between 30 and 100 percent of pregnant women. Bleeding gums create an entryway for bacteria to leak into the bloodstream. Once in the circulatory system, the bacteria can migrate to the placenta and cause inflammation there, sometimes triggering miscarriage or stillbirth.

"We knew from our previous work that uterine inflammation due to infection with this bacteria is associated with adverse pregnancy outcomes, but in order to prevent those outcomes, we needed to determine exactly how these infections trigger inflammation."

Using a mouse model, the researchers injected the bacteria into mice during their third trimester of pregnancy. As predicted, the bacteria invaded the animals' uteruses.

The researchers saw that the bacteria triggered an inflammatory response in endothelial cells within the mouse placenta, leading to preterm births. The inflammatory response only occurred when a specific immune protein was present in the mothers' endothelial cells. In pregnant mice lacking this protein, fewer fetuses died, suggesting that inflammation ignited by this protein is critical for causing preterm births.

Elimination of TLR4 from maternal endothelial cells alleviated placental inflammation and reduced fetal and neonatal death, while elimination of TLR4 in the hematopoietic cells had no effect. The placental inflammatory response followed a spatiotemporal pattern, with NF-kB activation observed first in the maternal endothelial cells and then in the decidual cells surrounding the endothelium, followed by induction of inflammatory cytokines and chemokines,

After determining how the bacteria trigger inflammation within the placenta, the team used cultured cells to look for ways to inhibit those mechanisms. "We were looking for an anti-inflammatory agent that's safe for pregnant women to use," says the senior author.

The doses of omega-3 fatty acids used in this study were far higher than those recommended for people taking fish oil supplements. The study points to a promising avenue for further research, but does not support any immediate changes in clinical practice.

An autoimmune cause of schizophrenia