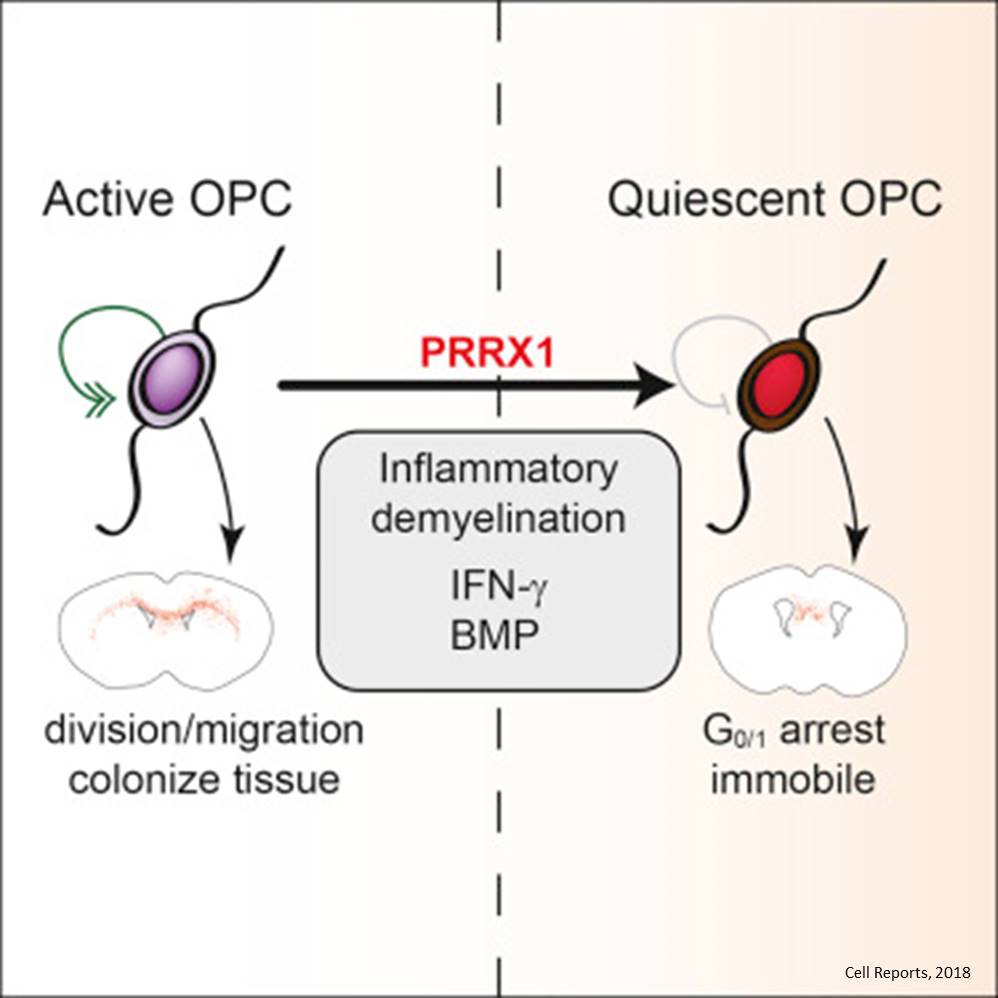 The pre-clinical findings published in Cell Reports by a research team reveal that activation of a specific transcription factor induces in adult stem cells a phenomenon called pathological quiescence. This is when adult stem cells are rendered incapable of responding to injury by producing myelin-forming oligodendrocytes. The failure to remyelinate is the key feature of MS. The paper defines the role of the previously undescribed transcription factor known as PRRX1 in human oligodendrocyte progenitor cells, the cells that generate myelin-forming oligodendrocytes.

Current MS research focuses largely on drugs that induce the differentiation of human oligodendrocyte progenitors. In contrast, the current research presents a novel concept for the development of new drugs based on blocking the pathological quiescence of progenitors. "The idea that pathological quiescence of progenitors could prevent regeneration in MS is distinct from the current pre-clinical strategies making their way into trial," explained the senior author.

"We found that switching this gene on could cause problems in myelin repair by blocking the proliferation of the oligodendrocyte progenitor cell, the stem cell-like precursor that is responsible for all myelin regeneration in the adult brain," the senior author said. The research demonstrated that PRRX1 expression results in the cell cycle arrest and quiescence of oligodendrocyte progenitors, which disabled the production of myelin.

In an animal model of leukodystrophy, the group of genetic disorders in which myelin fails to form or is destroyed in children, the senior author said that pathological quiescence induced by PRRX1 prevented cell colonization of white matter and effective myelin regeneration by transplanted human oligodendrocyte progenitors. They also found that blocking expression of this transcription factor prevented the negative effects of proinflammatory cytokines, such as interferon-γ, which regulates its expression.

"We found that blockade of PRRX1 expression prevents the negative effects of interferon-γ, suggesting that PRRX1 expression might be a viable target in inflammatory diseases, such as multiple sclerosis, where interferon-γ may prevent successful myelin regeneration," said the senior author. This suggests new targets for therapeutic intervention and how the disease environment in MS may prevent effective myelin repair and regeneration.

The finding that pathological quiescence is key to the inability to repair and regenerate myelin in MS and similar diseases provides a novel direction for the team's research. "We plan to pursue the idea that perhaps we could identify treatments for MS that work by overcoming pathological quiescence of oligodendrocyte precursors in demyelinating lesions that characterize this disease," the senior author said.