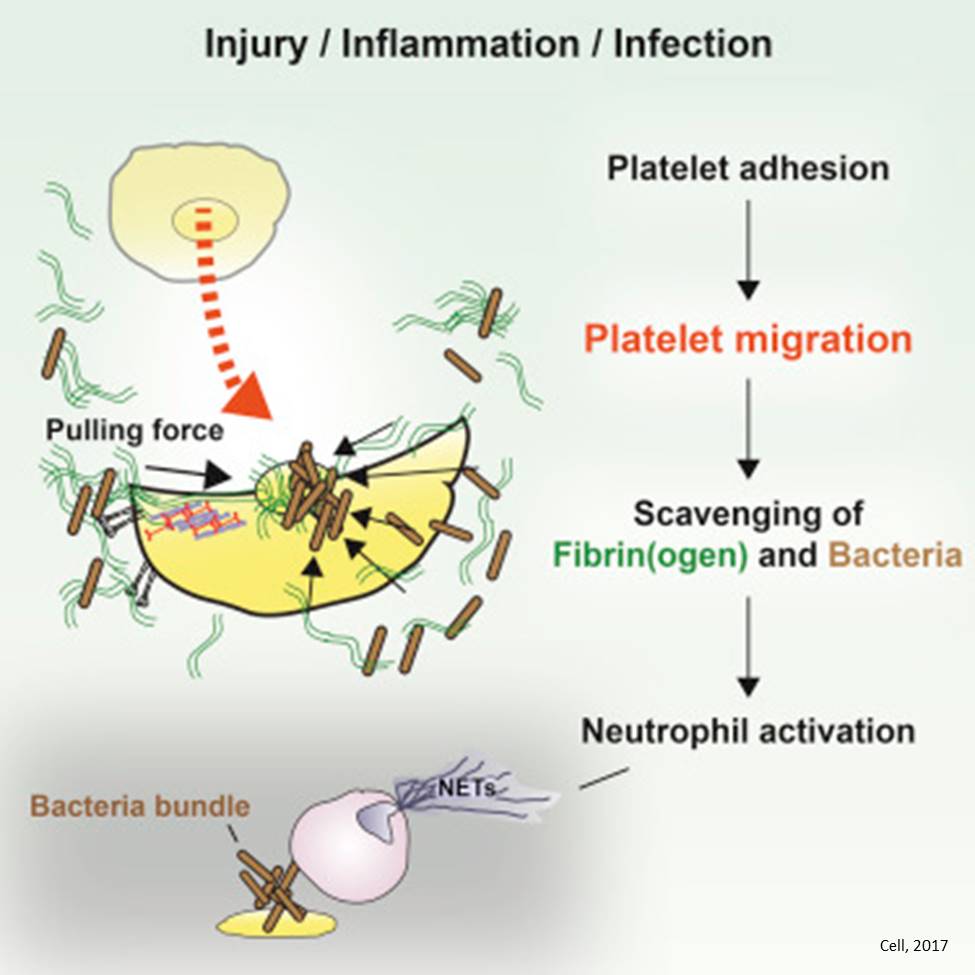 Some 750 billion platelets are passively transported in the bloodstream throughout the adult human body. Platelets adhere specifically to sites in the vasculature where the endothelial cells have been damaged by binding via surface receptors to proteins in the sub-endothelial cell layer. They then spread out on the extracellular matrix, and interact with one another to form a network that acts like a sticking plaster to seal the wound. Furthermore, they are intimately involved in initiating blood coagulation at wound sites, but also in the development of blood clots (thromboses) which can obstruct blood circulation.

The active role of blood platelets in immune defense has been underestimated. A new study shows that this cell type has a larger range of functions than previously thought. Thrombocytes are best known for their role in blood coagulation and wound-healing. But they are not only adept at patching up tears in the endothelial cell layer that lines the blood vessels. "They are also important in defending the organism against bacterial pathogens. They have the capacity to actively migrate within the organism, to interact with pathogens and immobilize them."

Researchers recently developed a way to track individual platelets at the site of an inflammatory reaction for extended periods. These observations revealed an unsuspected function of this cell type. "Not only do they attach to bacterial cells by passively sticking to the vascular wall, they are also capable of active locomotion," says the senior author. At sites of inflammation or infection, platelets begin to actively explore their immediate environment, and when they come into contact with foreign bodies, such as invasive bacteria, they use the traction associated with locomotion to collect them into bundles, rather like street-sweepers clearing up debris. The resulting platelet-bacterial aggregates facilitate the activation of neutrophils, which engulf the trapped microbes.

The reason why the versatility of platelets has so far been overlooked may well lie in the fact that they are derived from giant precursor cells called megakaryocytes by fragmentation, and therefore lack nuclei. This work demonstrates that they are nevertheless capable of undergoing dynamic shape change and active migration. This finding has implications that extend beyond their role in immune defense, because it reveals what anucleate cells can do. "This is a very striking demonstration that the cytoskeletal apparatus responsible for cell motility does not depend on the presence of a nucleus," senior author says.

In addition, the new results make platelets an attractive target for drug developers searching for novel ways to treat inflammation reactions. As senior author points out, "one way to modulate the action of the body's immune defenses would be to inhibit the ability of platelets to migrate."