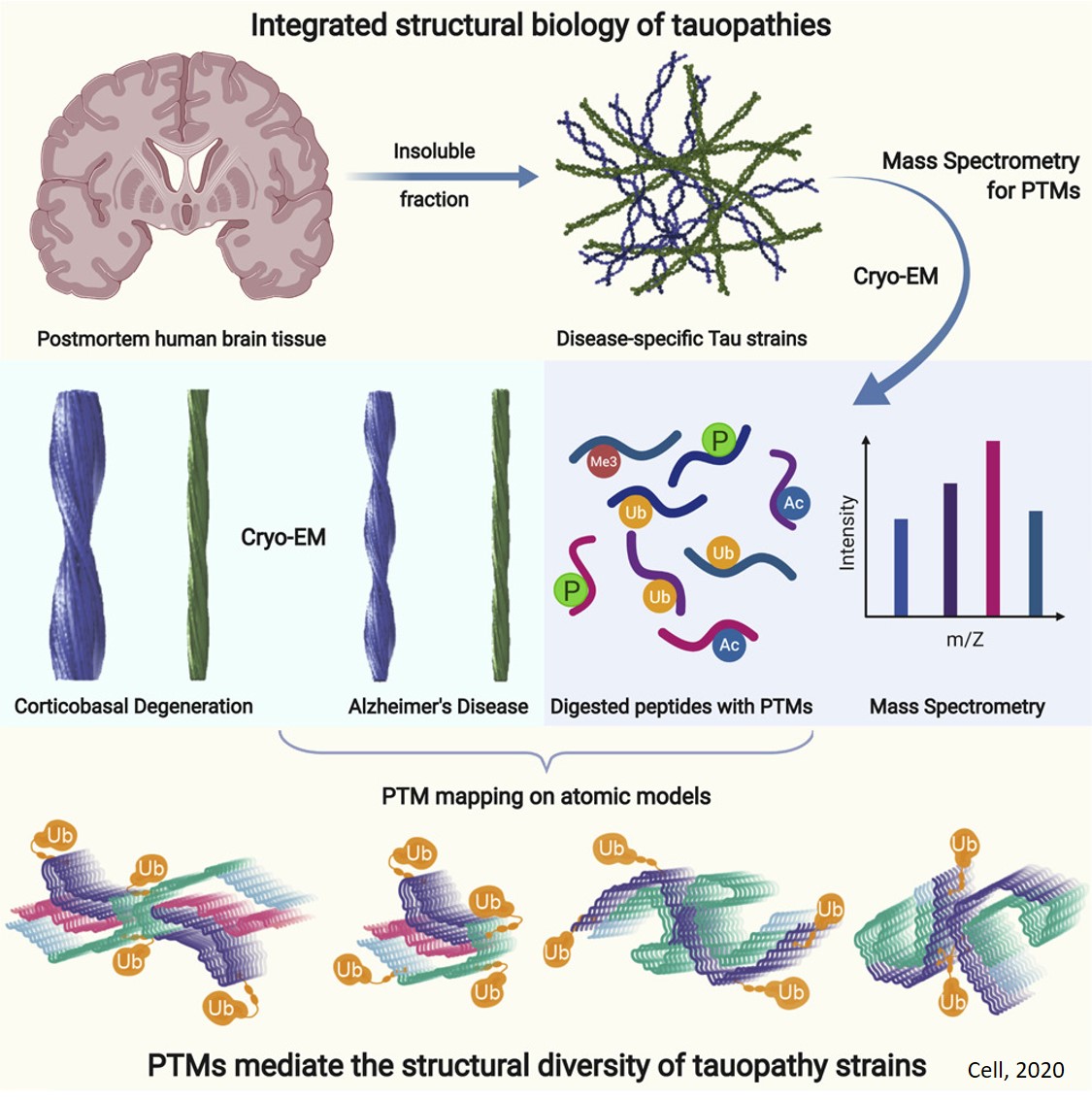 The protein tau has long been implicated in Alzheimer's and a host of other debilitating brain diseases. But scientists have struggled to understand exactly how tau converts from its normal, functional form into a misfolded, harmful one. Now, researchers have used cutting-edge technologies to see tau in unprecedented detail. By analyzing brain tissue from patients, this research team has revealed that modifications to the tau protein may influence the different ways it can misfold in a person's brain cells. These differences are closely linked to the type of neurodegenerative disease that will develop -- and how quickly that disease will spread throughout the brain.

The study, published in Cell, employed two complementary techniques to map the structure of tau and decipher the effects of additional molecules, called post-translational modifications (PTMs), on its surface. These new structural insights could accelerate the fight against neurodegenerative diseases, by helping researchers identify new biomarkers that detect these disorders before symptoms arise and design new drugs that target specific PTMs, preventing the onset of disease before it wreaks havoc on the brain.

"Tau has long been a protein of significant interest due to its prevalence in disease," said a Principal Investigator of the study. "In today's publication, we lay out compelling evidence that PTMs play an important structural role in tauopathies, the collection of neurodegenerative diseases characterized by toxic buildup of misfolded tau."

No two tauopathies are exactly alike. Each affects different parts of the brain -- even different cell types -- which can lead to different symptoms. Alzheimer's, for example, arises in the hippocampus, and so affects memory. Chronic traumatic encephalopathy, a disorder most often seen in survivors of traumatic brain injury, can lead to problems with movement, memory or emotion, depending on which areas of the brain are affected.

Scientists have used traditional imaging techniques to find clues to how tangles of tau, comprised of individual fibers, or filaments, are implicated in these diseases. But painting a complete picture has proven difficult.

"The brains of patients with neurodegenerative diseases are easy to identify: entire sections have been eaten away, replaced by large clumps and tangles of misfolded proteins like tau," said the paper's co-first author. "However, tau filaments are 10,000 times thinner than the width of a human hair, making them extraordinarily difficult to study in detail."

The researchers used cryo-EM and mass spectrometry to analyze the brain tissue from patients diagnosed with two tauopathies: Alzheimer's disease and corticobasal degeneration, or CBD. CBD is a rare but extremely aggressive tauopathy, affecting only one in every 10,000 people. Unlike Alzheimer's, which is thought to arise due to a number of factors including tau, CBD is primarily associated with misbehaving tau proteins.

The scientists' analysis of brain tissue samples revealed several key insights. Most notably, the researchers found that cross-talk between PTMs on the surface of tau influences the structure of the tau filaments, contributing to differences in tau filaments observed across the various tauopathies -- and even variations from patient to patient.

By comparing the structures and PTMs of tau filaments from CBD (corticobasal degeneration) and Alzheimer’s disease, it is found that ubiquitination of tau can mediate inter-protofilament interfaces. The authors propose a structure-based model in which cross-talk between PTMs influences tau filament structure, contributing to the structural diversity of tauopathy strains.

"Collectively, these results suggest that PTMs may not only be serving as markers on the proteins' surface, but are actually influencing the behavior of tau," said the author.

Moving forward, the team plan to expand this work to other tauopathies. Today's findings on Alzheimer's and CBD hold immense promise for the field, particularly in the development of new disease models -- such as lab-grown organoids, or mini-brains -- that may serve to accurately recapitulate what is actually happening in the brains of patients.

Universal immune mechanism as a regulator of sleep

Monoclonal antibody given to preterm babies may reduce wheeze later