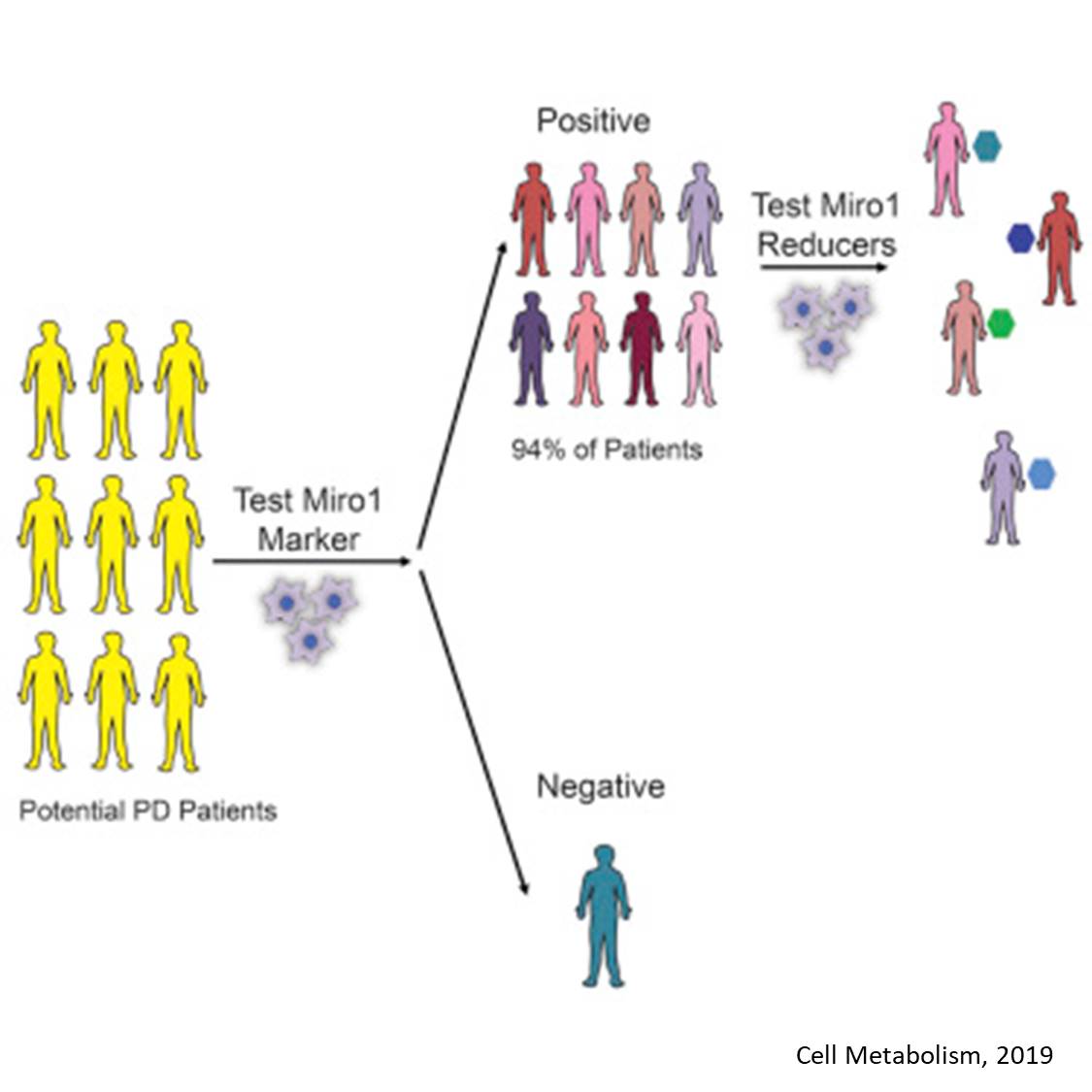 Investigators have pinpointed a molecular defect that seems almost universal among patients with Parkinson's disease and those at a high risk of acquiring it.

The discovery could provide a way of detecting the neurodegenerative disorder in its earliest stages, before symptoms start to manifest. And it points to the possibility of halting the disease's progression. The defect appears to be exclusive to individuals with Parkinson's disease.

"We've identified a molecular marker that could allow doctors to diagnose Parkinson's accurately, early and in a clinically practical way," said the senior author. "This marker could be used to assess drug candidates' capacity to counter the defect and stall the disease's progression."

The scientists also identified a compound that appears to reverse the defect in cells taken from Parkinson's patients. In animal models of the disease, the compound prevented the death of the neurons whose loss underlies the disease. These steps are described in a study to be published in Cell Metabolism.

An age-related progressive movement disorder, the disease stems from the mysterious die-off of a set of nerve cells, or neurons, in the brain that fine-tunes bodily movement. These neurons, which originate in a midbrain structure, the substantia nigra, are referred to as dopaminergic because they secrete a substance, dopamine, to transmit motion-modulating signals to other neurons. By the time a person starts manifesting symptoms of the disease, an estimated 50% of the substantia nigra's dopaminergic neurons have already died.

What makes these particular neurons die is unknown. A leading theory holds that the special intensity with which they perform their duties frazzles their mitochondria. These bacteria-sized cellular components generate energy for cells in exchange for a steady supply of raw materials: oxygen and carbon-rich carbohydrates or fats.

This process, known as respiration, has a downside: It inevitably generates toxic byproducts called free radicals, which not only can cause cellular damage but are extremely harmful to the mitochondria themselves.

Parkinson's is known to involve a defect in mitochondrial function. The harder a cell has to work, the more energy its mitochondria have to churn out -- and the more likely they'll burn out. Dopaminergic neurons in the substantia nigra are among the body's hardest-working cells.

Mitochondria spend much of their time attached to a grid of protein "roads" that crisscross cells. Like old cars that can no longer pass a smog test because they can't stop spewing noxious exhaust fumes, defective mitochondria have to be taken off the road. Our cells have a technique for clearing mitochondrial clunkers: a series of proteins that shuffle them off to the cell's recycling centers. But first, those proteins have to remove an adaptor molecule called Miro that attaches mitochondria, damaged or healthy, to the grid.

The group previously identified a mitochondrial-clearance defect in Parkinson's patients' cells: Their inability to remove Miro from damaged mitochondria.

In the new study, the team obtained skin samples from 83 Parkinson's patients, five asymptomatic close relatives considered to be at heightened risk, 22 patients diagnosed with other movement disorders and 52 healthy control subjects. They extracted fibroblasts -- cells that are common in skin tissue -- from the samples, cultured them in petri dishes and subjected them to a stressful process that messes up mitochondria. This should result in their clearance, necessarily preceded by removal of Miro molecules tethering them to the grid.

Yet the researchers found the Miro-removal defect in 78 of the 83 Parkinson's fibroblasts (94%) and in all 5 of the "high-risk" samples, but not in fibroblasts from the control group or other or from patients with other movement-disorders.

Next, the investigators screened 6,835,320 small molecules, whose structures reside in a commercially available database, in collaboration with Atomwise Inc. The biotechnology company's software predicted that 11 of these molecules would bind to Miro in a way that would facilitate its separation from mitochondria and would, in addition, be nontoxic, orally available and able to cross the blood-brain barrier, the study reports.

After feeding these compounds to fruit flies for seven days, the researchers determined that four of them significantly reduced the flies' Miro levels without toxicity. They tested one compound, which appeared to target Miro most exclusively, on fibroblasts from a patient with sporadic Parkinson's disease. It substantially improved Miro clearance in these cells after their exposure to mitochondria-damaging stress.

The scientists also fed the compound to three different fruit-fly strains bioengineered to develop Parkinson's-like climbing difficulty. Administering the compound to those flies throughout their 90-day life spans produced no evident toxicity and prevented dopaminergic neurons' death in all three strains and, in two, preserved their climbing ability.

"Our hope," the senior author said, "is that if this compound or a similar one proves nontoxic and efficacious and we can give it, like a statin drug, to people who've tested positive for the Miro-removal defect but don't yet have Parkinson's symptoms, they'll never get it."

Watching in 3-D, as neurons talk to each other in a living mouse brain Radiation-free alternative to mammogram in the making

English and Portuguese are processed similarly in the brain