Preventing the onset of schizophrenia in mouse model 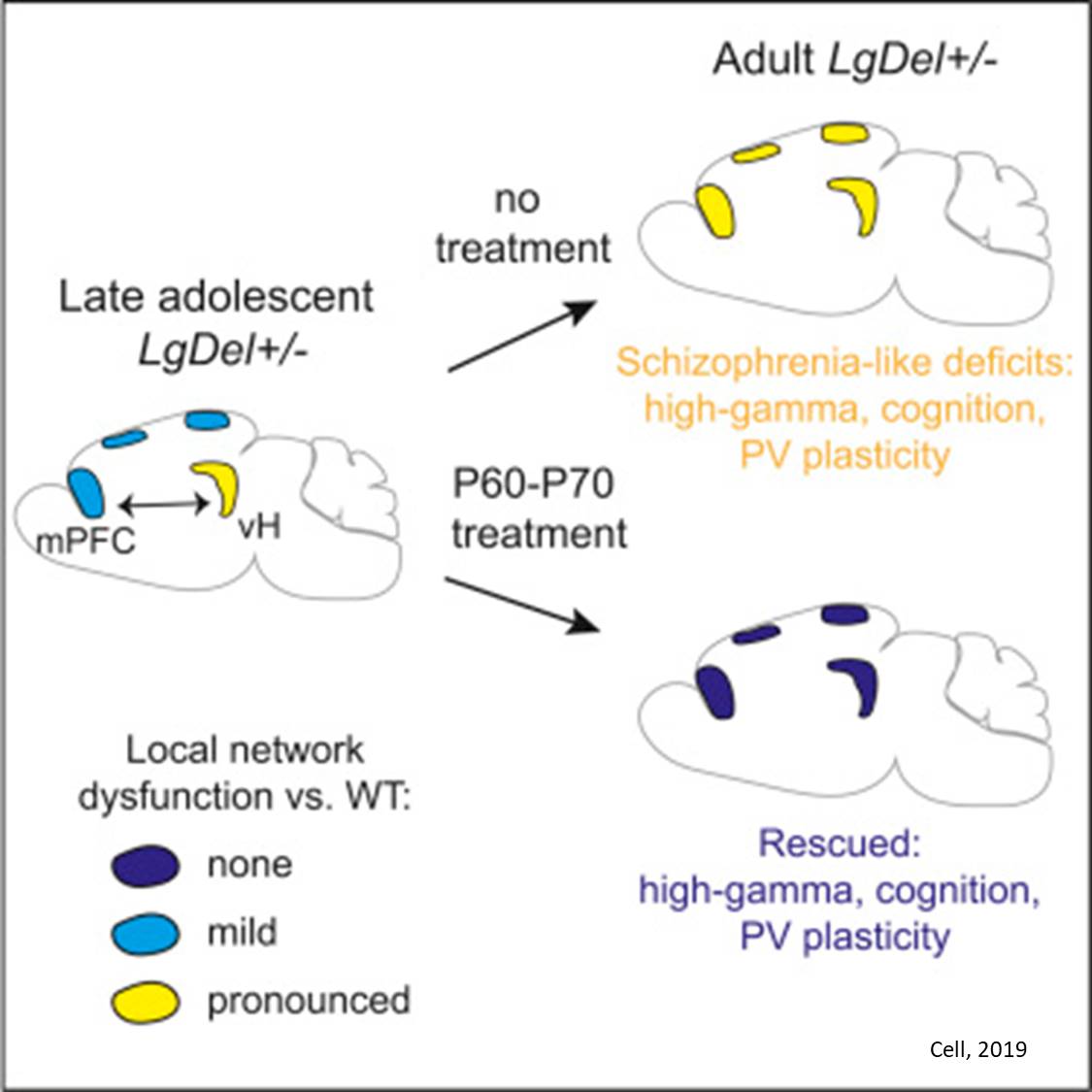 Although predisposing processes occur earlier, schizophrenia breaks out at young adulthood, suggesting it might involve a pathological transition during late brain development in predisposed individuals. Using a genetic mouse model of schizophrenia, researchers showed that, like in patients, characteristic network and cognitive deficits only emerge in adult mice. They then demonstrated that these deficits could all be permanently prevented by specific treatments during a late adolescence sensitive time window. Their study has been published in Cell.

Schizophrenia - affecting about 1% of the worldwide population - is a mental disorder characterized by disorganized thoughts, false beliefs, difficulty in social relationships, cognitive deficits, abnormal motor behavior, as well as blunted emotions and motivation. A notable feature of this severe, chronic condition is that its symptoms first emerge at the transition between late adolescence and young adulthood. Schizophrenia treatments focus on the symptoms and often consist of antipsychotic medications.

The causes of schizophrenia are complex. They include comparable contributions by environmental factors - such as problems during birth, psychosocial factors, stress, and the consumption of cannabis during adolescence - and genetic factors, which in most cases involve mutations in large numbers of genes, each making a small contribution to the condition.

In order to do research on the root causes of a condition with a complex genetic component, researchers need to focus, if possible, on simpler 'genetic models' - people or animals with well-defined mutations exhibiting a strongly elevated risk of developing the disease. In schizophrenia, such models include people with the 22Q11DS syndrome, caused by deletions within a segment of chromosome 22, who have a 20 to 30-fold increased risk of developing schizophrenia. This led researchers to develop mice carrying a corresponding deletion in order to use them as a model of schizophrenia for lab research. (These mice are called "LgDel mice" but for simplicity reasons we will call them "schizophrenia-mice" here.)

Although PV neuron dysfunctions only spread through the brain in the adult, they were already present in the hippocampus of adolescent schizophrenia mice. Since late adolescence represents a time window when coordinated activity depending on hippocampal and cortical PV neurons is important for late brain maturation, the group hypothesized that adolescent hippocampal dysfunctions might interfere with proper brain maturation in schizophrenia-mice. The researchers investigated whether they could prevent the onset of schizophrenia by suppressing the network dysfunctions during the most critical time window, long enough to allow for transition to normal adult brain function, in spite of a strongly predisposing genetic background.

They succeeded! They showed that repeated treatments targeting the hippocampal PV network with common antipsychotic drugs or with more specific genetic activators of PV neurons, during 6-10 days, at the transition between late adolescence and adulthood, produced a complete and long-lasting rescue of network dysfunctions, as well as cognitive deficits in adult schizophrenia-mice.