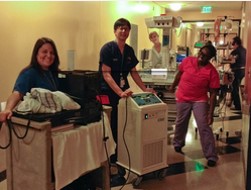 Therapeutic hypothermia or targeted cooling of the brain is the first therapy for neuroprotection in neonates with HIE. Without treatment, these babies often develop cerebral palsy or other severe complications. World-wide, nearly one million babies will die and another million will be left with disabilities.

About half of infants with HIE don't adequately respond to therapy. Although we know hypothermia helps, we don't fully understand how it helps or how best to help those babies for whom hypothermia isn't enough to alleviate their brain injur, said the author.

The team of researchers, physicians and nurses at Children's Hospital Los Angeles transferred the babies and all of the cooling equipment to the MRS lab - in essence "bringing the whole NICCU down to the MRI suite," which, according to the author, enabled them to map what is happening biochemically in the brains of the infants while they were undergoing therapy.

The researchers measured the concentrations of key molecules involved in the use and storage of energy, neurotransmission and oxidative stress in newborns with HIE. Their findings, showing that neuroprotection is achieved by realizing a specific balance between energy metabolism and neurotransmission, were published by the Journal of Cerebral Blood Flow and Metabolism.

The study suggests that a key effect of hypothermia is not only a reduction in energy metabolism, but also a reduction in the synthesis of glutamate and other excitatory neurotransmitters.

The decrease in excitatory transmitters is expected to decrease the likelihood of seizures, but should also reduce energy utilization, since neurotransmission consumes between one-third and one-half of the brain's energy.