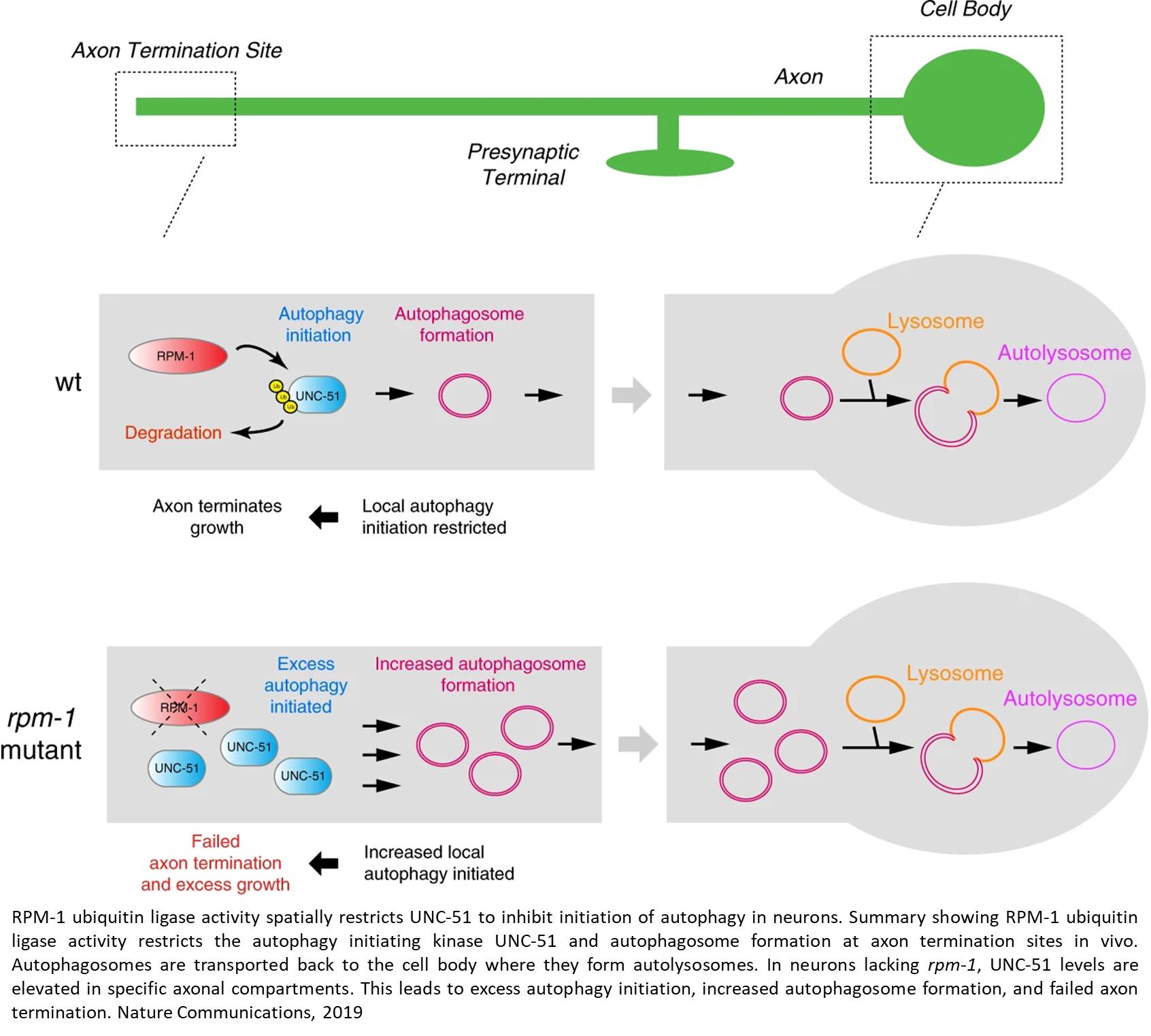 Neuroscientists have identified a molecule in brain cells that regulates autophagy, an important cellular waste-recycling system implicated in a range of brain disorders. The new finding illuminates an important feature of nervous system biology and opens the door to new approaches for treating Alzheimer’s and other neurodegenerative diseases.

In their study, which appears in Nature Communications, the scientists show that a protein known as ULK, which is responsible for switching on autophagy in cells, is regulated by an enzyme called RPM-1. Although the scientists did their principal experiments in the simple roundworm C. elegans, a prominent model for biology and neuroscience research, tests in human cells suggest that this important relationship could exist in most or all animals.

“How autophagy is regulated in the brain has remained cryptic, but here—for the first time—we’ve found a molecule that potentially does just that,” says the senior author. “There’s potential for clinical applications down the road, given the growing evidence that neurodegenerative diseases such as Alzheimer’s feature prominent abnormalities in autophagy in nerve cells.”

The autophagy process works as a key waste-disposal and housekeeping system in cells by recycling damaged and potentially harmful proteins and other cellular components. In some animals, calorie restriction and genetic manipulations that extend lifespan have been found to boost autophagy. The process is particularly important in the brain, where most nerve cells cannot be replaced in adulthood and therefore must keep themselves—and their often-lengthy output fibers, called axons—tidy and healthy for many decades.

Studies in animals have shown that altered autophagy is a hallmark of neurodegeneration, and growing evidence suggests that autophagy becomes impaired in the brain with aging and in Alzheimer’s and other neurodegenerative diseases. For these reasons, scientists are keenly interested in finding ways to boost autophagy in the brain.

One obvious way to enhance autophagy would be to target a protein that normally inhibits this process. But scientists have suspected that the nervous system might have its own separate regulator of autophagy. That critical molecule is what the authors believe they have uncovered.

At the onset of their study, the team were not investigating autophagy. The laboratory primarily studies nerve cell development, and the team was doing experiments in C. elegans with a molecule called RPM-1, which plays an important role in axon growth and maintenance of nerve cell connections. To their surprise, the researchers found that RPM-1 affects axon development by inhibiting ULK, a known initiator of autophagy, thereby restricting autophagy in the nervous system.

“We knew then that we had something really interesting,” the senior author says. This finding advances our understanding of brain development and suggests that RPM-1’s counterpart in humans could be targeted to boost autophagy in the brain. Thus, the team may have identified a new way to possibly prevent or treat neurodegenerative disease. To that end, the scientists performed initial experiments with human cells and showed that RPM-1’s human counterpart, PAM, regulates the human autophagy-initiating protein ULK1.

“PAM is potentially a key molecule to target if you want to boost autophagy in the nervous system,” the senior author says.

He and his colleagues are following up with further experiments to explore the functions of RPM-1 in the nervous system and beginning to explore translating their findings into models of neurodegenerative disease.