Rapamycin has harmful effects when telomeres are short 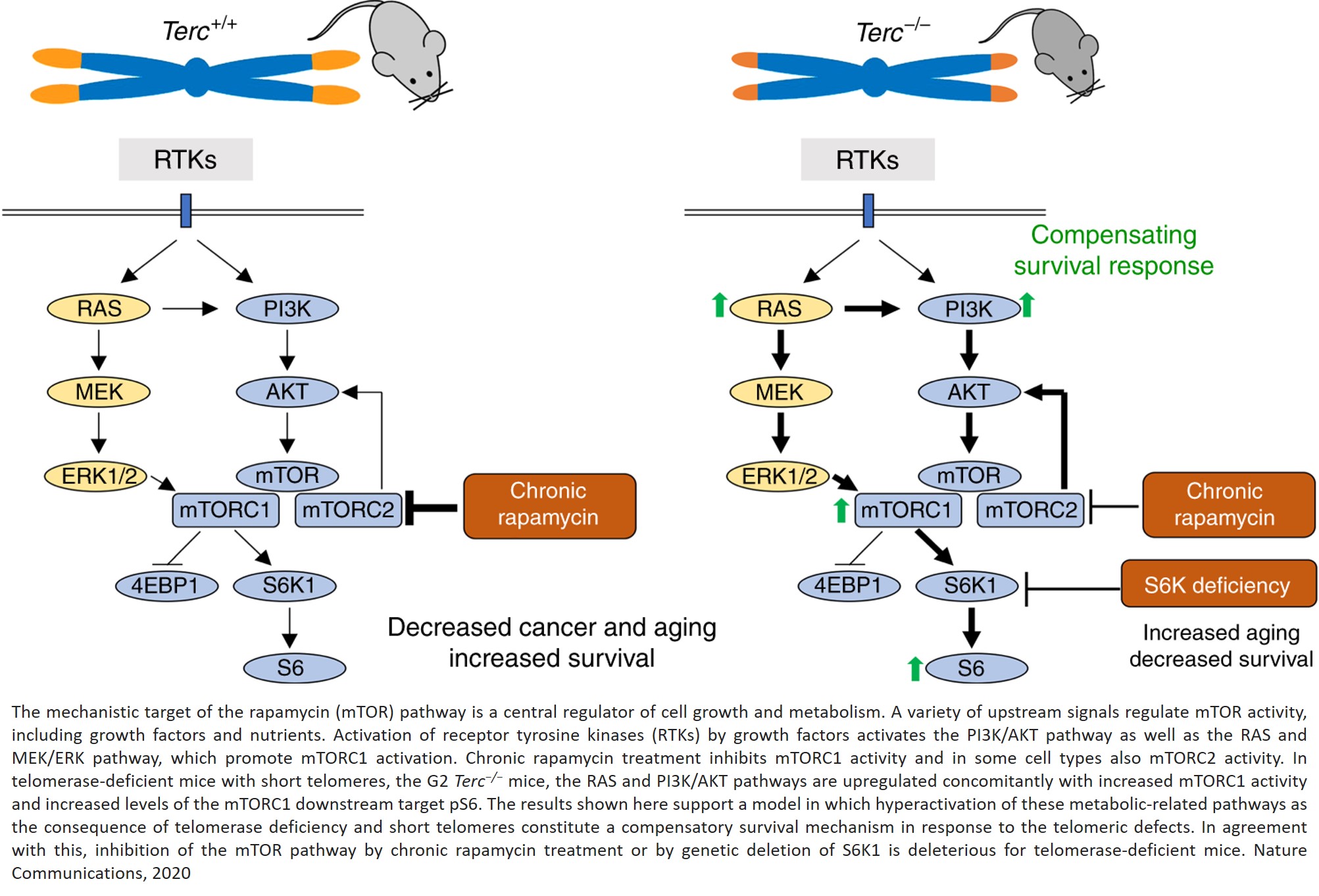 In the past few decades, it was discovered that the rate at which we age is strongly influenced by biochemical processes that, at least in animal models, can be controlled in the laboratory. Telomere shortening is one of these processes; another one is the ability of cells to detect nutrients mediated by the mTOR protein.

Researchers have been able to prolong life in many species by modifying either one of them. But what if we manipulate both? A team of researchers now studied it for the first time, with unexpected results. Blocking nutrient sensing by treatment with rapamycin, an mTOR inhibitor, delays the ageing of healthy mice but, curiously, it worsens diseases and premature ageing that occur in mice with short telomeres. This finding has important implications for the treatment of diseases associated with short telomeres, but also for age-related diseases that are also associated with short telomeres. The study is published in Nature Communications.

Telomeres, at the end of chromosomes, preserve the genetic information of the cells. They shorten with age until they can no longer fulfil their function: the cells stop dividing and the tissues age since they are no longer able to regenerate.

On the other hand, the ability of cells to detect nutrients depends on a cascade of biochemical signals that activates the mTOR protein. This is a fundamental molecular pathway because it controls the growth of cells and the whole organism. It also plays a central role in ageing: if the mTOR pathway is blocked, ageing slows down. But this had only been demonstrated in young and healthy mice. What happens when mice have short telomeres, associated with ageing and certain diseases called telomere syndromes?

An mTOR inhibitor is rapamycin, a drug that prolongs life in yeasts, flies, worms and mice, and that significantly reduces the incidence of cancer in mice with normal telomeres.

The researchers wanted to test whether rapamycin could also extend the life of mice with short telomeres, but they found that the opposite happens: they age up to 50% faster. This basic finding allowed the authors to discover that mTOR is, in fact, important for the survival of mice with short telomeres, and therefore blocking it has a negative effect.

But it also has clinical implications. Short telomeres are associated with or are the cause of the so-called telomere syndromes, diseases such as dyskeratosis congenita, aplastic anaemia, pulmonary and hepatic fibrosis, and other degenerative diseases for which few treatments exist. Blocking the mTOR pathway with rapamycin was considered a possible strategy against these diseases, but the results of the study suggest that it would not work and could even be harmful.

"In light of all the beneficial effects of inhibition of the mTOR pathway in extending longevity, here we set to address whether rapamycin treatment could also ameliorate the premature ageing phenotypes and the decreased lifespan of telomerase-deficient mice with short telomeres," the authors write. But, although "in control mice [with normal telomeres] rapamycin extended the lifespan, in mice with short telomeres it reduced it. We did not expect that. These results are of clinical interest for human diseases in which patients have critically short telomeres," explain authors of the paper.

Another surprise for the researchers was the finding that in mice with short telomeres the mTOR pathway is hyper-activated, that is, their cells are more sensitive than usual to the presence of nutrients. The authors interpret that it is precisely the greater ability to detect nutrients that allows these mice to survive, an unexpected conclusion that could open new avenues for research in the treatment of telomere syndromes.

"This discovery indicates that hyper-activation of the mTOR pathway is necessary to compensate for problems arising from having short telomeres," the senior author explains.

In fact, it is known that mTOR is also hyper-activated in some organs of elderly mice, which may indicate that this is a phenomenon associated not only with abnormally accelerated ageing but also with natural physiological ageing.

Mechanism of self-protection by bacterial predator

How herpes simplex virus reactivates in neurons to trigger disease