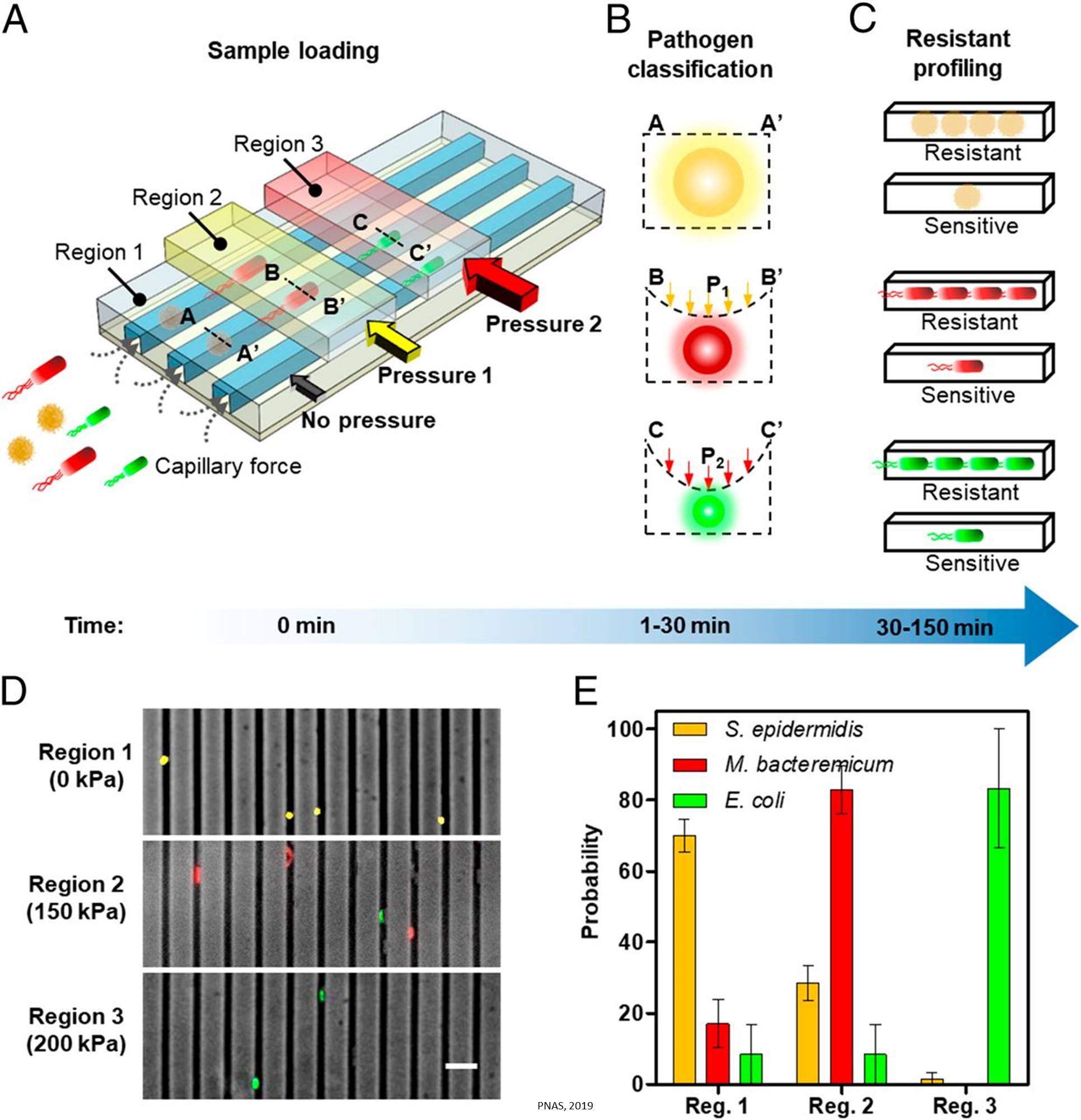 Medical professionals may soon be able to detect bacteria in patient samples in minutes rather than days thanks to a new approach that traps and tests single cells, according to a team of biomedical engineers.

Currently, testing for pathogenic bacteria takes from three to five days, so physicians often treat patients initially with broad spectrum antibiotics rather than targeting specific microorganisms. They typically may not know whether the bacteria they are trying to kill are resistant to the antibiotics they might choose.

"Multidrug-resistant pathogens are common causes of patient morbidity and mortality," said the senior author. "Without a rapid method of microbiological analysis, physicians are often required to prescribe antibiotics empirically, using the worst-case assumption of the most severe bacteria."

The team created a device, using microchannels, that captures individual bacteria cells and lowers the microchannel ceiling until the bacterium is trapped. Microscopy can then determine the shape of the bacteria.

Because bacteria come in three main shapes -- spherical, rod-shaped, and spiral -- this step not only shows that bacteria are present in the sample but begins to classify them.

"Urinary tract infections are the most common bacterial infections," said the senior author. "However, over 75 percent of urine specimens sent to a clinical microbiology laboratory are negative. Rapidly ruling out or confirming the presence of bacteria at a clinically relevant concentration will dramatically enhance patient care."

After finding bacteria is present, the sample is exposed to antibiotics and the researchers then monitor bacterial growth. If the bacterium continues to grow after exposure, that strain is considered resistant to that antibiotic, but if the bacterium ceases to grow or dies, then the strain is not resistant, and the infection can be treated using a single, targeted antibiotic.

By monitoring their growth in the presence of antibiotics at the single-cell level, antimicrobial susceptibility of the bacteria can be determined in as little as 30 minutes compared with days required for standard procedures. The microfluidic system is able to detect bacterial pathogens in urine, blood cultures, and whole blood and can analyze polymicrobial samples.

The researchers report in a recent issue of the Proceedings of the National Academy of Sciences, that the combination of microchannel trapping and antibiotic exposure "rapidly determines the existence of bacteria, classifies major classes of bacteria, detects polymicrobial samples and identifies antimicrobial susceptibility directly from clinical samples at the single cell level."

The authors did a pilot study of 25 clinical urine samples to demonstrate the clinical applicability of the microfluidic system. The system is 100 percent sensitive to the presence of bacteria and will classify bacteria about an 83 percent of the time. It also achieved 100 percent agreement in identifying bacteria that are antibiotic resistant.

The adaptable, microchannel cell-trapping device is manufactured by molding, and according to the authors can be manufactured economically at production scale. They are  currently working with GE Global Research to develop a benchtop version of the entire system for potential use in clinics, pharmacies, emergency rooms and physicians' offices. The microfluidic chip on which the analysis will be conducted will be disposable.

"This is similar to a printer and printer cartridges," said the senior author. "We are also exploring the feasibility of developing a portable or handheld version of the system for other applications, such as field testing, nursing homes and rural clinics." The researchers have a provisional patent.