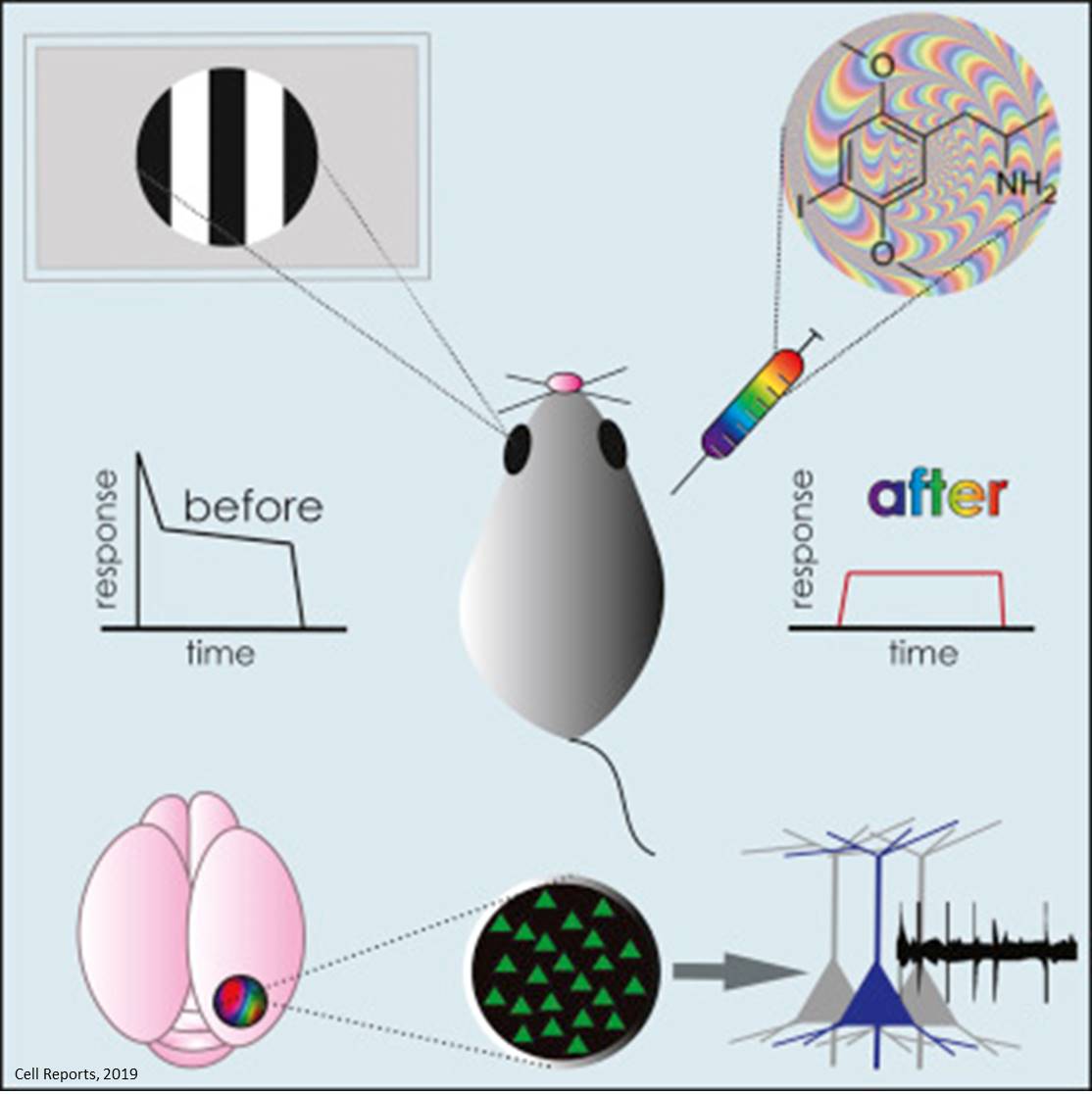 Hallucinations result in dramatic disruptions in perception and cognition, but the changes in brain activity that underlie such alterations are not well understood. In a study publishing in the journal Cell Reports, researchers looked at how a hallucinogenic drug impacts the brains of mice at the level of individual neurons. They found that visual hallucinations may be triggered by a reduction in signaling within the visual cortex, rather than an increase, and by altered timing of when the neurons fire.

In addition to helping us understand how hallucinogens affect brain function, the findings also have implications for figuring out the neurological underpinnings in disorders like schizophrenia that are characterized by hallucinations.

"You might expect visual hallucinations would result from neurons in the brain firing like crazy, or by mismatched signals. We were surprised to find that a hallucinogenic drug instead led to a reduction of activity in the visual cortex," says senior author.

"In the context of visual processing, though, it made sense," the senior author adds. "Understanding what's happening in the world is a balance of taking in information and your interpretation of that information. If you're putting less weight on what's going on around you but then overinterpreting it, that could lead to hallucinations." One example of this is the vivid images that are often seen in dreams, despite no visual signals coming in to the brain; another example is the hallucinations experienced after spending long periods of time in the dark.

"We're interested in understanding how we create representations of the world using vision," the senior author says. "In many areas of biology, one of the best ways to study a process is to observe what happens when it's perturbed."

The drug given to the mice in the study is called DOI (4-iodo-2,5-dimethoxyphenylisopropylamine) and is often used in animal studies. Like other hallucinogenic drugs, including LSD and psilocybin, it acts on serotonin 2A receptors. But unlike those other drugs, it's not regulated by the Drug Enforcement Agency as a Schedule 1 drug, making it more accessible for research purposes.

After being given the drug, the mice were shown images on a screen. The researchers used calcium imaging and single-unit electrophysiology to monitor the responses in their brains and look at which neurons were affected by both the visual stimulation and the drug. They observed that there was an alteration in timing in the neurons, which was accompanied by a reduction in signaling. The fact that the mice were awake was significant: Much of the previous research on the effects of activating serotonin 2A receptors in the brain has been done in animals that were anesthetized.

The researchers were also able to confirm that the overall signals being sent, and organization of brain activity across the visual cortex, was similar to what is seen in the absence of the drug. This suggests the visual information being conveyed to the brain is not changed--it is just reduced in amplitude and altered in timing. These types of measurements are not accessible in data obtained from neuroimaging studies in humans.

There are limitations to studying visual hallucinations in animal models because animals can't directly report what they're seeing. But research has shown that drugs that cause hallucinations in humans cause reliable movement changes in mice, such as head twitches and unusual paw movements, suggesting that they similarly affect brain function. Future experiments will examine the ability of mice to make visual discriminations, which could potentially reveal whether perception is altered.

"I don't feel like we've necessarily found the smoking gun for the entire underlying cause of hallucinations, but this is likely to be a piece of it," the senior author concludes. "The data we've collected will provide a foundation for additional studies going forward. In particular, we plan to use genetic manipulation to study particular parts of this circuit in more detail." Additionally, because the serotonin 2A receptor is known to play a role in schizophrenia, the investigators say it may be possible to apply these findings toward gaining a better understanding of what's happening in the brain with that disease.