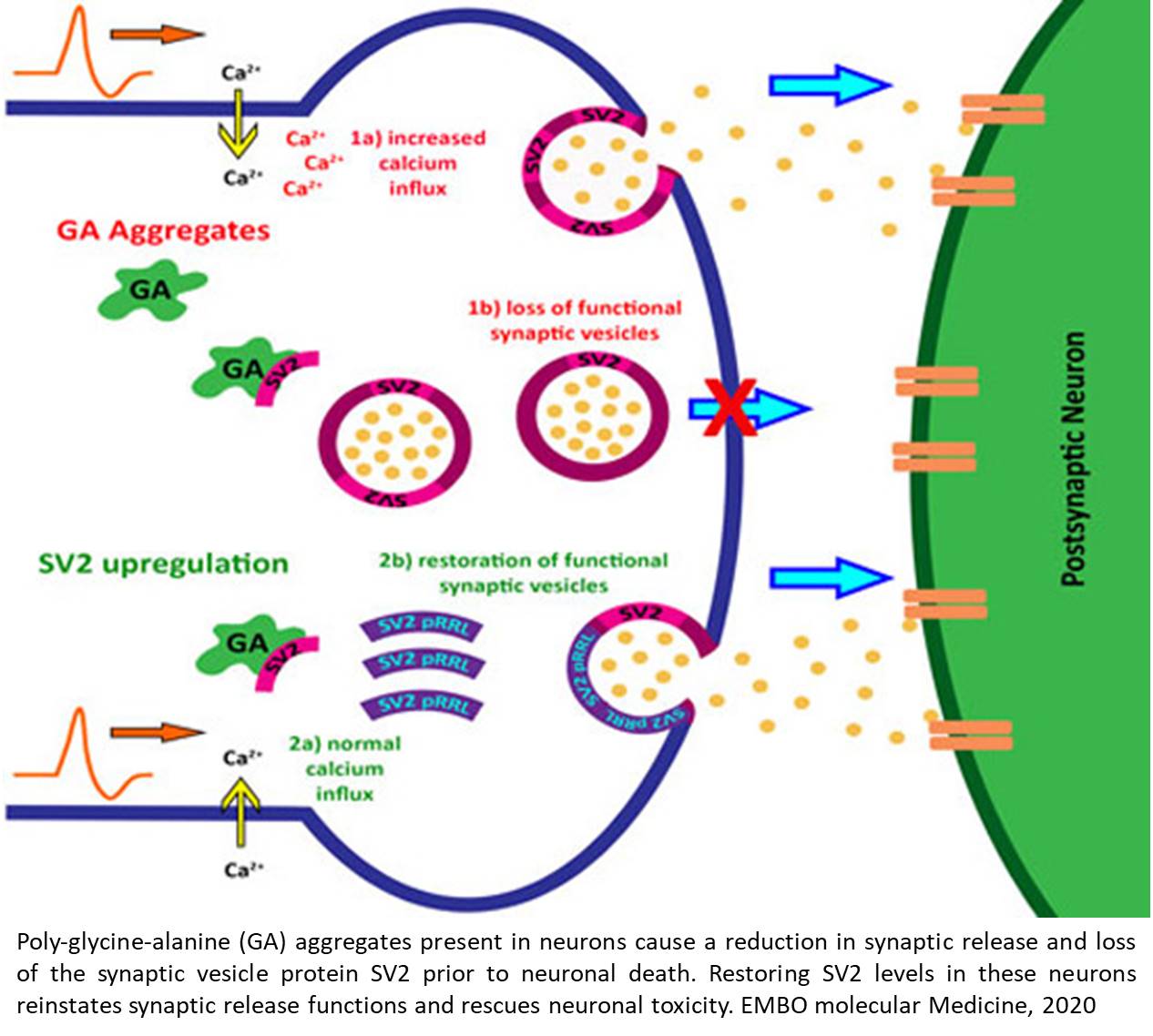 Patients with amyotrophic lateral sclerosis (ALS), also known as Lou Gehrig's disease, lose muscle control as nerve cells or neurons in the brain and spinal cord degenerate and can no longer send signals to muscles.

Previous studies have identified that problems at the synapse, the point where signals jump from one neuron to another neuron or to a muscle, could contribute to that disconnect. But it's unclear what causes these problems. New research has identified a new mechanism by which the buildup of toxic proteins - a common hallmark of ALS - disrupts neuronal transmission. The findings provide a groundwork for understanding how to maintain the nerve-muscle connection in ALS, and could lead the search for new therapies. The study was published in EMBO Molecular Medicine .

The culprit behind inherited cases of ALS is frequently an error in the C9orf72 gene, which incorrectly instructs the cell to over-produce a repetitive sequence of proteins, called dipeptide repeats (DPRs). One of the most abundant of these DPRs is the GA protein, which forms aggregates and gradually causes toxicity that can kill the neuron.

Indeed, when the researchers examined the synaptic machinery responsible for sending signals from the neuron to muscle, they found a reduction in a key protein called synaptic vesicle-associated protein 2 (SV2) in motor neurons grown or cultured in a petri dish. SV2 regulates the release of neurotransmitters, which are the signaling molecules that neurons use to communicate with each other and muscles.

This decrease in SV2 results in diminished release of neurotransmitters, preventing the neuron from properly communicating with the muscle. Importantly, this reduction in SV2 was also found in vivo at the neuron-muscle connections in a mouse model of GA aggregation, as well as in motor neurons derived from induced pluripotent stem cells (iPSCs) of patients with the C9orf72 form of ALS.

"The results suggest that these impairments in neuronal transmission also occur in patients' cells," says the co-senior author of the study.

"This helps us to understand the basis for symptoms ultimately observed in patients. Importantly, it helps identify targets and mechanisms in disease-relevant systems where GA is not artificially made or over-expressed."

Using genetic tools, the researchers then replenished the SV2 protein in the cultured motor neurons with GA aggregates, and found that synaptic function was restored to normal levels. Restoring SV2 also reduced toxicity normally caused by the GA aggregates, and even prevented cells from dying and prolonged their survival. Notably, the deficits in SV2 and synaptic transmission occur before toxicity and cell death, so intervening in that time window could be significantly beneficial in slowing disease progression.

"We've shown that even though the GA aggregates are still present, replenishing the SV2 protein can combat the most detrimental effects of this protein buildup," says the author of the study. "This points to SV2 as a promising therapeutic target for this genetic form of ALS."