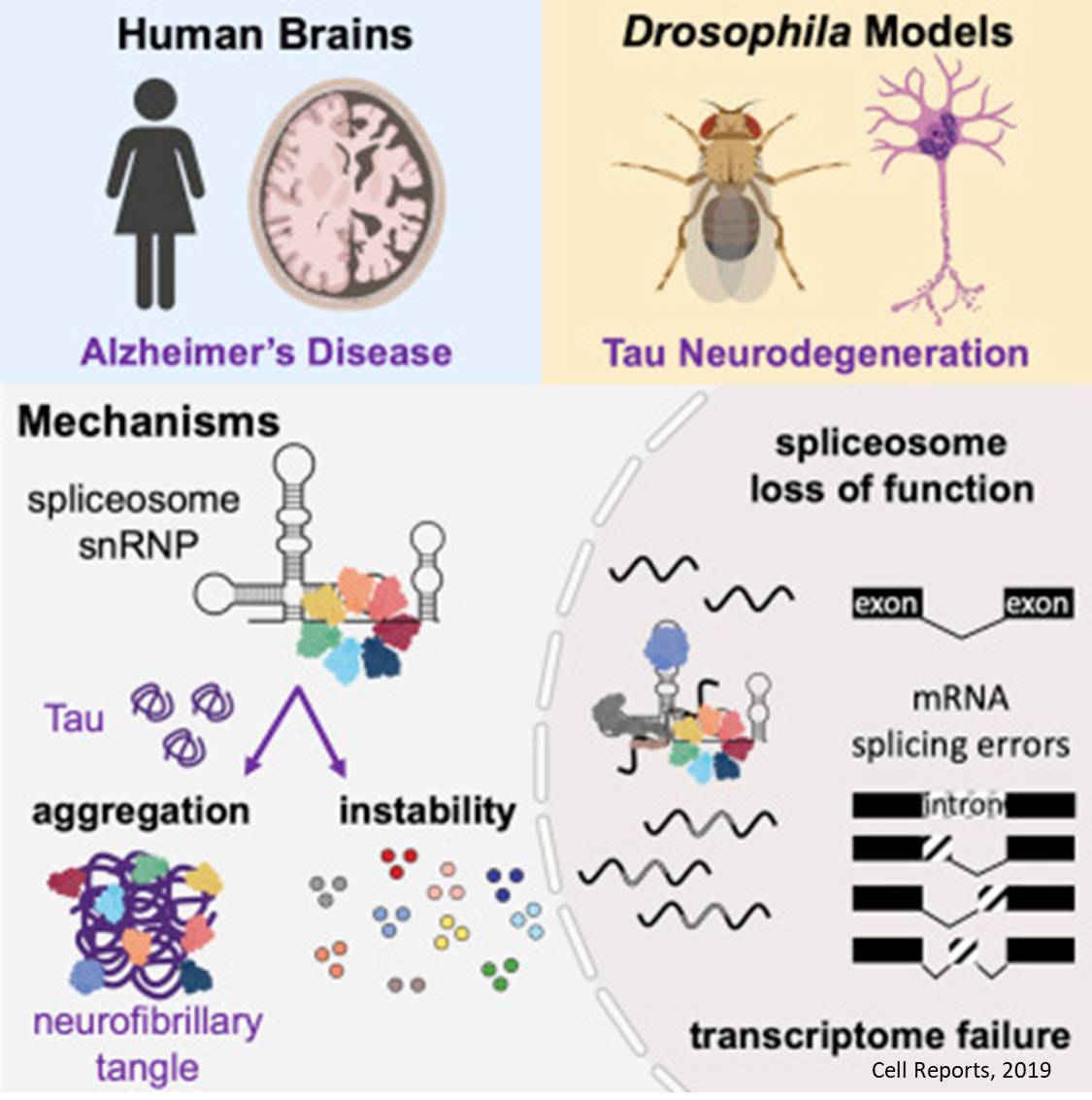 A collaborative study published in the journal Cell Reports provides evidence for a new molecular cause for neurodegeneration in Alzheimer's disease. The study integrates data from human brain autopsy samples and fruit flies to reveal a novel mechanistic link between alterations in RNA splicing and tau-mediated neurodegeneration in Alzheimer's disease.

"Cells carry out their functions by producing specific proteins encoded in their genes. To produce proteins, genes encoded in the DNA are first transcribed into RNA molecules, which subsequently are translated into proteins," said corresponding author.

In this study, researchers investigated a molecular mechanism called RNA splicing that is involved in the production of mature RNA molecules necessary to produce working proteins. They looked into the possibility that aggregates of tau protein within neurons, a key marker of Alzheimer's disease, interfered with RNA splicing.

"Alterations in RNA splicing are known to be involved in the development of certain neurodegenerative conditions, such as spinal muscular atrophy and amyotrophic lateral sclerosis. However, until now, their role in Alzheimer's disease was not studied in great detail," the author said.

To carry out RNA splicing, cells use the spliceosomal complex, a multiprotein cellular machinery that coordinates the production of mature RNA molecules. RNA splicing is one of the important ways by which organs generate different cell types, each of which perform specialized functions and is especially critical to generate the cellular diversity and complexity in the human brain. Minor perturbations in the assembly and/or function of the spliceosome are predicted to render brain cells vulnerable to degeneration and premature death, particularly in aging individuals.

Recent studies using postmortem human brain tissue show that multiple components of the spliceosomal complex can bind to and co-aggregate with neurofibrillary tau tangles. In the current study, the researchers began by overexpressing toxic tau in fruit flies as a model to test whether spliceosome-tau interactions might cause neurodegeneration.

Since many spliceosomal proteins were present in low levels in the neurons of flies overexpressing toxic tau, the researchers proposed that tau aggregates either disrupted proper assembly of the spliceosome or sequestered key components in the cytoplasm, away from the site of action in the nucleus. This model was further supported by experiments in which flies expressing toxic tau were found to have global disruptions in RNA splicing that resulted in thousands of erroneous RNAs.

Analyzing specific splicing errors that occur with low frequency in large datasets is a time-consuming and challenging task.

"Identifying and classifying specific splicing errors turned out to be fairly difficult. Current computational tools that analyze RNA sequencing datasets typically filter out any change that does not match the normal RNA splicing patterns. We had to specifically look into this 'junk material' to identify patterns of specific splicing errors," the author said.

For this study, the authors modified CrypSplice, a novel computational tool that was developed earlier, to perform in-depth analysis of splicing errors, which uncovered a link between tau tangles and an increase in a particular type of splicing errors.

"This is the first study to demonstrate the role of tau aggregates in disrupting the cellular localization and function of spliceosomal complex components that result in global splicing errors and cause progressive loss of neurons," the senior author said. "Our findings present an exciting new possibility of using RNA splicing as a potential molecular target for Alzheimer's disease and other tau-mediated neurodegenerative conditions."