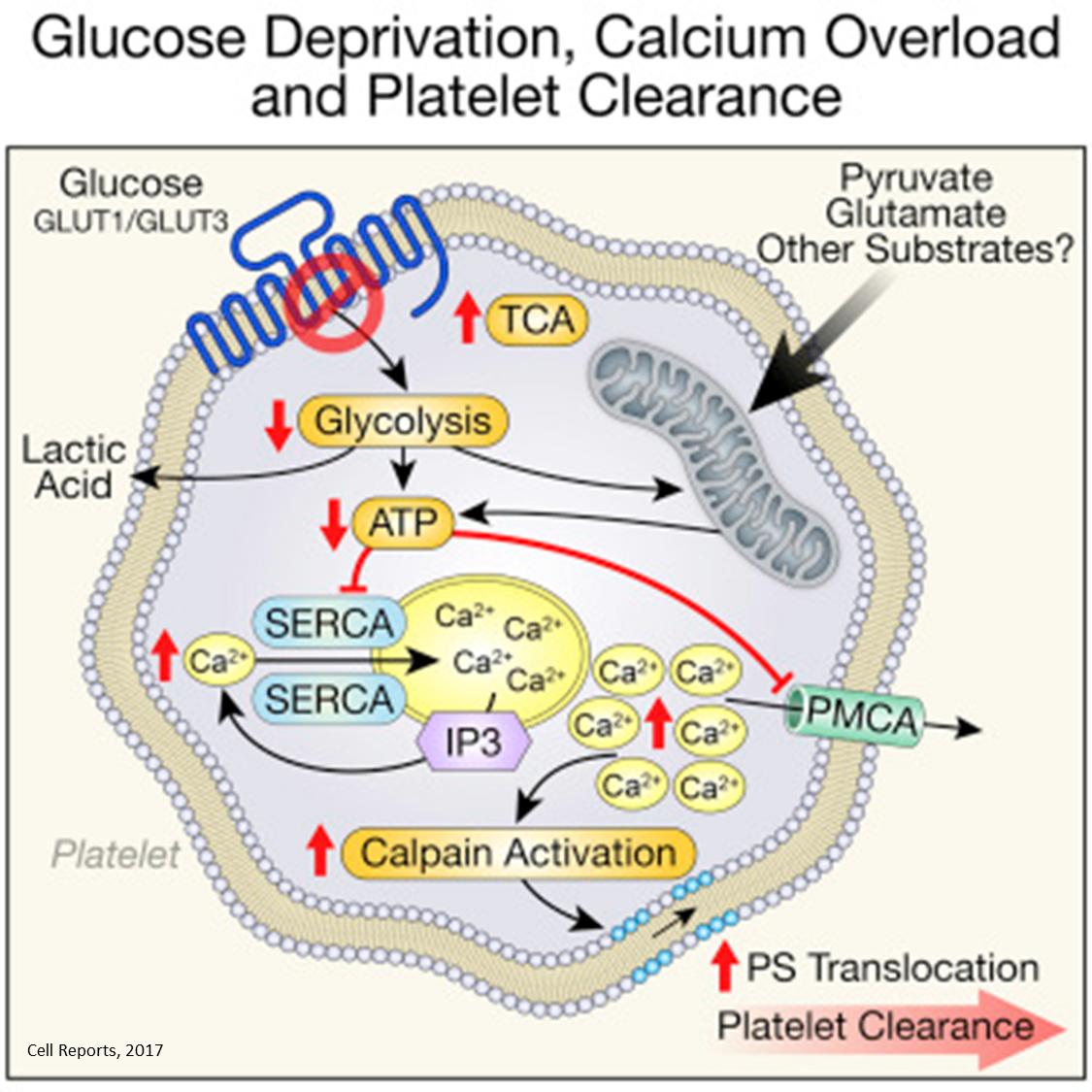 Platelets are disc-shaped cellular fragments in the blood that, when activated, aggregate to form clots. Increased platelet activation may also contribute to inflammatory conditions such as rheumatoid arthritis and the increased mortality from sepsis.

Platelets are highly reliant on their ability to metabolize glucose, according to a new study by researchers published in Cell Reports and may have implications for understanding the increased risk of thrombosis--blood clots inside blood vessels--in people with diabetes.

The research team found that mice lacking the proteins that platelets use to import glucose from the circulation have lower platelet counts, and their platelets live shorter lives.

"We found that glucose metabolism is very critical across the entire life cycle of platelets--from production, to what they do in the body, to how they get cleared from the body," says the senior author.

In the absence of the ability to metabolize glucose, the mice did produce platelets, and the platelets' mitochondria metabolized other substances in place of glucose to do their job of generating the cells' energy. But the mice had platelet counts that were lower than normal.

The researchers were able to pinpoint two causes for the low platelet count in mice lacking GLUT1 and GLUT3: fewer platelets being produced, and increased clearance of platelets.

"Clearly, we show that there's an obligate need for glucose to bud platelets off from the bone marrow," senior author says.

In addition, the team observed that young platelets functioned normally, even in the absence of glucose. But as they aged, the platelets were cleared from the circulation earlier than normal because they were being destroyed.

"We identified a new mechanism of necrosis by which the absence of glucose leads to the cleavage of a protein called calpain, which marks them for this necrotic pathway," senior author says. "If we treated the animals with a calpain inhibitor, we could reduce the increased platelet clearance."

The team also sought to determine whether platelets could exist and function when mitochondria metabolism is halted. The mice were injected with a mitochondrial poison at a dose that a healthy mouse can tolerate. In the mice deficient in GLUT1 and GLUT3, however, platelet counts dropped to zero within about 30 minutes.

"This work defined a very important role for metabolism in how platelets leave the bone marrow, how they come into circulation, and how they stay in circulation," senior author says. "It could even have implications for why platelets have to be used within a certain period of time when they're donated at the blood bank--the fresher the better."

The research team showed that GLUT3 played the predominant role in platelet activation and that mice with reduced GLUT3 in platelets survived pulmonary embolism and developed less severe arthritis in a model of rheumatoid arthritis. Senior author says this study sets the stage for exploring strategies in which modifying platelet glucose utilization could be harnessed for therapeutic purposes in conditions in which inhibiting platelet activation might be beneficial.

"We know that in diabetes, platelets are using too much glucose," senior author says. "This increase in glucose metabolism does correlate with the platelet hyperactivity that characterizes many diabetic vascular complications. Reducing the ability of platelets to use glucose could be of therapeutic benefit in the context of diabetes."