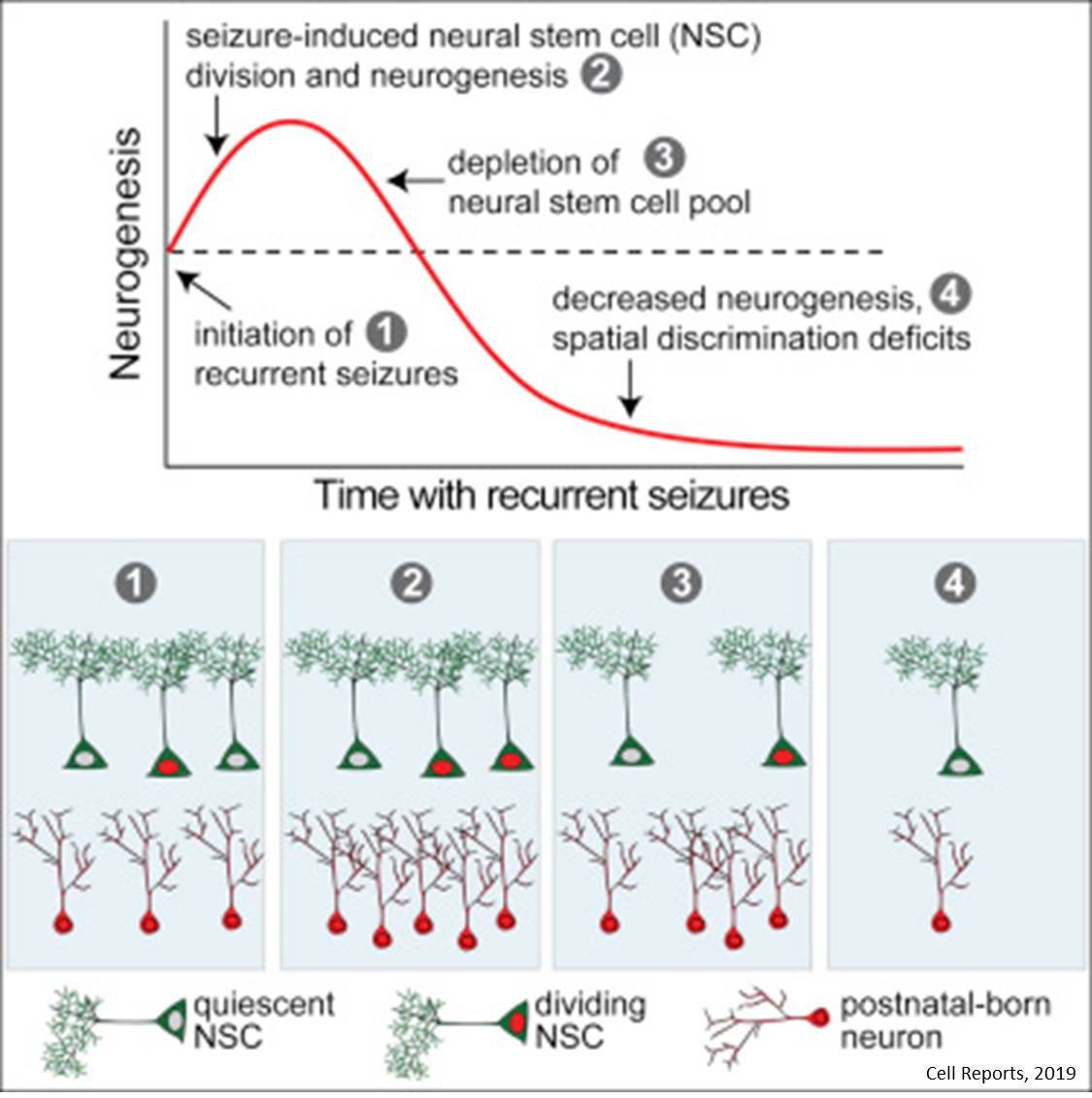 Working with animal models of Alzheimer’s disease, a research team discovered that seizures that are associated with the disease both in animal models and humans alter the normal dynamics of neurogenesis in adult brains. Administering anti-seizure medication restored neurogenesis and improved performance in a spatial discrimination task.

“Whether neurogenesis is altered at all in patients with Alzheimer’s disease is a controversial topic in the field. While some groups present evidence supporting a decrease in neurogenesis, others claim that it increases or that there is no change,” said corresponding author. “Working with mouse models of the disease we have identified a mechanism that we propose may integrate all of these various findings.”

“Although our study was conducted in mice, we suggest that the level of neurogenesis in a human brain with Alzheimer’s disease may similarly depend on the stage of the disease, being higher at very early stages and then declining more rapidly than normal as disease continues,” the senior author said. “The level of neurogenesis would depend on when during the disease the samples were taken. These findings may explain the seemingly contradictory findings about whether and how neurogenesis is affected in Alzheimer’s disease.”

The senior author also speculated that the mechanism they discovered may also help explain controversial studies regarding whether adult neurogenesis, which has primarily been studied in rodents, occurs at all in humans. “Depending on the medical history of the patients from whom the brain samples were obtained, they might have high, low or even nonexistent levels of neurogenesis at the time of death,” the senior author said.

Interestingly, when the researchers treated their mouse model with anti-seizure drugs they normalized the dynamics of neurogenesis. Further, animals treated with anti-seizure drugs improved their performance in a spatial discrimination task when compared with non-treated mice. Taken together, the findings suggest that the seizures are deeply connected to the alterations in neurogenesis and cognitive functions both in Alzheimer’s disease and epilepsy.

They were expecting that accumulation of amyloid-beta in the brain, a major hallmark of the disease, would also affect neurogenesis as suggested by experiments in the labs of other groups, the senior author said. However, the observations of from the current study suggest that the effect of seizures on neurogenesis seems to be larger than that of amyloid-beta accumulation.

The finding that anti-seizure medications can normalize the process of neurogenesis in a model of the disease suggests that it also might be possible to do so in human patients.

“However,” the senior author remarks, “more work is needed and caution is necessary because the medication would have to be administered early in the disease, just as seizures are beginning to occur.”